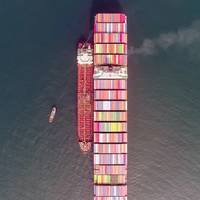 The final quarter of 2019 marked a massive decline of high-sulphur fuel oil (HSFO) sales, as the industry transitioned into compliance of the International Maritime Organization's (IMO) 2020 Sulphur Cap (IMO 2020). In Singapore, the world’s largest bunkering hub, the bunker sale landscape saw significant change as the sale of high-sulphur fuel oil dropped tremendously in a matter of months. In contrast, the sale of low-sulphur fuels skyrocketed in the final quarter.The first wave… 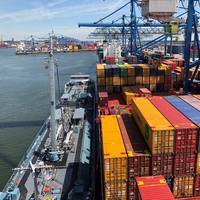 Containerships performed its first simultaneous operations (SIMOPS) bunkering, which allows for the concomitant bunkering of liquefied natural gas (LNG) and execution of loading and unloading procedures.An unprecedented achievement improving Containerships’ operational efficiency and highlighting the Group’s leading role in the energy transition of the shipping industryOn July 4th, 2019, Containerships successfully carried out SIMOPS bunkering on its LNG-powered CONTAINERSHIPS NORD vessel in the Port of Rotterdam.

The Maritime and Port Authority of Singapore (MPA) revoked the bunker supplier license of Southernpec (Singapore) Pte Ltd., effective May 29, 2019. During a recent enforcement check, MPA found that Southernpec employees engaged in bunker malpractices, which include the use of magnets to interfere with the mass flow meter during bunkering operations. Its cargo officers also did not record the information in the bunkering documents accurately, which breached the terms and conditions of its bunker supplier license. 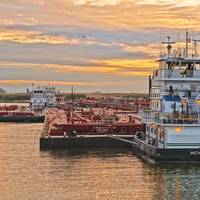 Another year; another major fleet takeover by Kirby Corporation. But the leader of the inland tank-barge sector is not growing for growth’s sake: a deeper look at the numbers shows a disciplined strategy at work.“Kirby is definitely the big gorilla in the inland barge market,” affirmed Jefferies analyst Randy Giveans. Indeed, Houston-headquartered Kirby Corp has been extremely active buying fleets over the past few years, most recently acquiring the 63 tank barges of Cenac Marine in March for $244 million.

The Maritime and Port Authority of Singapore (MPA) has revoked the bunker craft operator licence of Southernpec (Singapore), with effect from 08 May 2019. Southernpec will no longer be allowed to operate as a bunker craft operator in the Port of Singapore.Investigations by MPA revealed that Southernpec had engaged in a bunker malpractice, involving the use of a magnet to interfere with the mass flow meter on board a tanker during a bunkering operation, which constituted a breach… 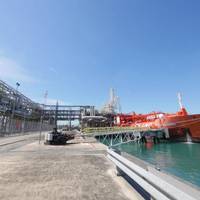 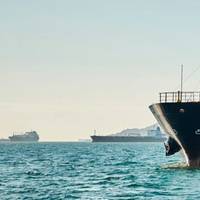 Danish bunker group Monjasa has transferred a ship from West Africa to Panama, where it carried out its first fuel supply off the coast of Balboa."As part of a fleet reshuffle, Accra arrived in Panama after forming part of Monjasa’s West Africa bunker operation. The tanker fast received all safety and operational approvals from the Panama Maritime Authorities and completed her first fuel supply at Balboa Anchorage on 18 January," said a statement from the marine fuels supplier.Accra is a 2010-built and 8,800 dwt tanker.

Arkas Bunkering have signed a protocol with Japan-based Sumitomo Corporation for the use of liquefied natural gas (LNG) as bunker fuel in Turkish and nearby seas. As environmentally-friendly buildings, vessels and fuels have become more popular than ever, new applications acting as reminders for both states and civil initiatives of their environmental responsibilities continue to emerge. With International Maritime Organisation’s (IMO) global sulphur cap set to enter into force in 2020, the maximum amount of sulphur allowed to be contained in bunker fuel will be reduced worldwide. 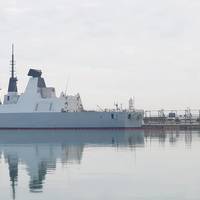 A Singapore marine fuel supplier and three executives have been charged with cheating as part of a government crackdown on short deliveries of fuel to vessels in the world's largest bunkering hub. Vermont UM Bunkering Pte Ltd, two directors and a former bunker manager were charged with 150 counts of conspiracy to charge customers for more marine fuels - also known as bunkers - than actually delivered, the Corrupt Practices Investigation Bureau (CPIB) said in a statement. "Through these alleged fraudulent transactions, Vermont Bunkering had dishonestly induced its customers to make excess payments totalling over $8 million," the statement said.

The Maritime and Port Authority of Singapore (MPA) has revoked the bunker supplier and bunker craft operator licences of Transocean Oil Pte Ltd, with effect from 6 November 2017. Transocean will no longer be allowed to operate as bunker supplier and bunker craft operator in the Port of Singapore. As part of MPA’s ongoing regulatory efforts to ensure the integrity of bunkering in Singapore, checks were conducted on Transocean in March and April this year. MPA’s investigations revealed…

Aegean Bunkering Pte Ltd will halt physical supply operations in Singapore by January, the company said, becoming the fourth such firm to exit the world’s largest marine refuelling hub after it adopted tougher bunkering procedures this year. Since adopting mass flow meters (MFM) to streamline operations on marine refuelling, or bunkering, barges at the start of 2017, suppliers in Singapore have seen margins squeezed and competition surge in the battle for market share. “2017 has seen heightened commercial pressures in Singapore, and as a result, management has determined that Aegean’s resources can be more profitably deployed elsewhere,” its president, Jonathan Mcilroy, said in a statement on Tuesday.

FueLNG, a joint venture between Keppel and Shell Eastern Petroleum (Pte) Ltd (Shell), has achieved the first commercial Liquefied Natural Gas (LNG) bunker transfer in Singapore by completing truck-to-ship bunkering for the Floating Liquefaction (FLNG) vessel, Hilli Episeyo. The LNG bunker transfer, which was carried out in batches from 22 July to 23 September 2017, was conducted in accordance with the Singapore Chemical Industry Council (SCIC) Technical Reference for LNG Bunkering (TR 56), which provides a safe, efficient and sustainable technical framework for LNG bunkering operations.

FueLNG, a joint venture between Keppel and Shell Eastern Petroleum (Pte) Ltd (Shell), has achieved the first commercial Liquefied Natural Gas (LNG) bunker transfer in Singapore by completing truck-to-ship bunkering for the Floating Liquefaction (FLNG) vessel, Hilli Episeyo. The LNG bunker transfer, which was carried out in batches from July 22, to September 23, 2017, was conducted in accordance with the Singapore Chemical Industry Council (SCIC) Technical Reference for LNG Bunkering (TR 56), which provides a safe, efficient and sustainable technical framework for LNG bunkering operations. This marks the first LNG trucking operation for FueLNG… 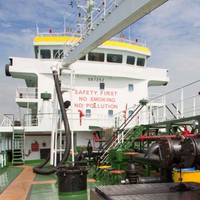 The Maritime and Port Authority of Singapore (MPA) will not be renewing the bunker supplier licences of Panoil Petroleum Pte Ltd and Universal Energy Pte Ltd when they expire on 31 August 2017. The bunker craft operator licence of Universal Energy Pte Ltd will also not be renewed. Both companies will no longer be allowed to operate as a bunker supplier and bunker craft operator in the Port of Singapore. Panoil Petroleum Pte Ltd made unauthorised alterations on the pipelines of their bunker tankers and has accumulated demerit points[1] for non-compliances to the bunkering procedures.

Physical bunker supplier Monjasa has been active in the Panama Canal since 2011 and established a physical presence for operations and bunker trading in Panama City in 2015. Now one year after the official inauguration of the new locks of the expanded Panama Canal, Monjasa said it has seen supply volumes continually grow. “Since the opening of the new locks exactly a year ago, we have seen a positive development in the local bunker market,” said Rasmus Jacobsen, Managing Director for Monjasa Americas. “On a daily basis, we already see sicx ships passing through the new locks, and as the tonnage further increases, we expect this number will increase to eight1, 10, or possibly 12,” Jacobsen said. 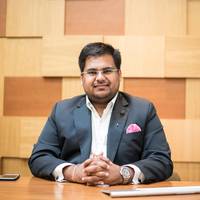 Gulf Petrochem Group, the UAE based global bunker supplier, said it is now officially offering physical supply of Gasoil on the River Thames, U.K. The group’s deliveries will be carried out using a barge on an exclusive long-term charter named the Conveyer. The move will allow Gulf Petrochem Group to supply ISO compliant Gasoil to its customers at all ports and wharfs along the Thames and Medway. Further, the group’s Rotterdam operations have added to its current fleet with the time charter of The Melbourne. 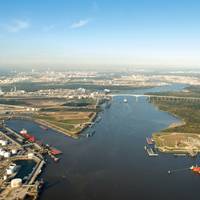 GCC Bunkers said it seeks to establish itself as a leader in developing compliance solutions for the IMO global sulfur cap in 2020 and is operated by principals Mark VandeVoorde and John Mafrige. Longer term, GCC is actively evaluating several processing or manufacturing opportunities for post 2020 bunker fuels to be produced in Texas. The Company has secured working capital funding from a Texas-based private equity group and has entered into agreements for physical marine fuels storage at Texas International Terminals in Galveston, beginning July, 2017. 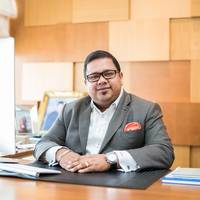 Gulf Petrochem Group, the UAE based global bunker supplier, has set another milestone in its operations with the first-ever bunker supply by barge at the non-conventional port of Paradip in Odisa, India’s east coast in a joint effort with Indian Oil Corporation Limited (IOCL). Gulf Petrochem arranged for the supply of 810 metric tons of bunker fuel IFO 180 CST by barge. Typically, supplies were made to the non-regular bunker port of Paradip only by Road Tanker Wagons (RTW) and for small volumes.

In a move which has been hailed as a landmark moment for the bunker industry, the use of mass flow metering (MFM) for heavy fuel oil bunker deliveries in Singapore became mandatory on January 1, 2017. The Maritime and Port Authority of Singapore’s (MPA) efforts have been applauded by many in the industry – including World Fuel Services – who see MFM as an important tool for developing more transparency and accountability for the bunker supply chain. So how does MFM work, and why is it so important to the bunkering industry? When a mass of liquid passes through an oscillating tube, the inertia effect of the moving liquid will cause the tube to twist – and the twisting will be in direct proportion to the liquid‘s mass flow.

Aegean Marine Petroleum Network Inc. has announced the launch of a new service center in Rostock, Germany that will serve all German Baltic Sea ports and Southern Scandinavian ports. The operations at Rostock will be managed by the existing team at OBAST Bunkering & Trading GmbH (OBAST), a physical bunker supplier and cargo oil trader. Under the terms of the agreement with OBAST, Aegean will acquire OBAST's existing share capital. E. Nikolas Tavlarios, President of Aegean Marine Petroleum Network…

The Standard Club has quoted a  a circular earlier this year by the Maritime and Port Authority of Singapore (MPA) for the mandatory use of the mass flow metering (MFM) system for marine fuel oil (MFO) deliveries in Singapore with effect from 1 January 2017. The circular covers the set of core requirements for metering system qualification, installation, testing, procedures and documentation for MFO deliveries via the MFM system in the port of Singapore. From 1 June 2016, all bunker suppliers… 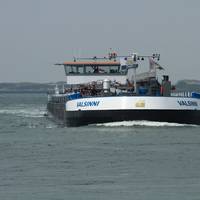 UAE based global bunker supplier Gulf Petrochem Group is now offering physical bunker supply in the port of Antwerp, Belgium from its existing office in Rotterdam, the Netherlands with immediate effect. The new offering will cater to the group’s global customers and provide them with a wide portfolio of marine fuel products such as RMG 380 and LSGO from two exclusive time chartered barges, the Valsinni and the Chardonnay. Both barges have a capacity of 4,600 dwt (deadweight tonnage)…