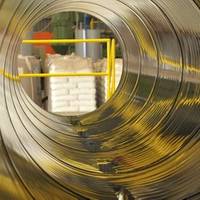 The provider tubular solutions for the energy markets Vallourec Soluçoes Tubulares do Brasil has been awarded by TechnipFMC in Brazil to supply around 12,000 tons of seamless steel rigid line pipe with outside diameters 8” and 10”.The pipe will be used in the fabrication of the riser and flowline system for interconnecting 13 wells (6 production wells and 7 water alternate gas injection wells), to be installed in the pre-salt field Mero 1, which is part of the giant Libra reservoir.Libra covers an area of 1…

The global LNG as a bunker fuel market was valued around US$ 550 million in 2017, and is expected to register a CAGR of over 8.5%.The first five-year cumulative revenue (2017-2021) is projected to be USD 3.4 bn which is expected to increase significantly over the latter part of the five-year forecast period, said a research report by Marketresearch.LNG ships is expected to be the major application segment in the global LNG as a bunker fuel market. LNG fueled ships emit zero sulphur oxide emissions along with decline in carbon dioxide gas release by 25%…

Global LNG to be Major Part of Bunker Fuel Market

Liquefied natural gas (LNG) ships is expected to be the major application segment in the global LNG as a bunker fuel market.According to a market research report, LNG fueled ships emit zero sulphur oxide emissions along with decline in carbon dioxide gas release by 25%, these are primary factors promoting the use of LNG as fuel in marine transport.LNG is used as a marine fuel and it offers various advantages for the ships. LNG as ship fuel will reduce sulphur oxide (SOx) emissions by 90% - 95%… 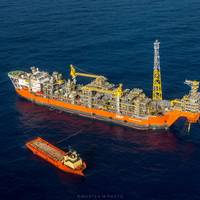 Teekay Offshore Partners L.P. announced that its jointly owned floating production storage and offloading (FPSO) unit, the FPSO Pioneiro de Libra (Libra), has achieved first oil and commenced its 12-year charter contract with a group of international oil companies, including Petrobras, Total, Shell, CNPC and CNOOC Limited, on the Libra oil field where it will perform early well tests. The Libra FPSO unit is the first unit to produce oil on the giant Libra block, which covers more than 1,500 square kilometers in the Santos Basin.

British Columbia’s first liquefied natural gas (LNG) proposal at Grassy Point near Prince Rupert has filed its export application with Canada's National Energy Board (NEB). "Aurora LNG is moving forward with their plans to export B.C.'s natural gas to new markets overseas," said Premier Christy Clark. "This marks another step towards realizing the transformative opportunity LNG presents us. "Filing an application for an export license is an important step," said Kevin Reinhart, CEO of Nexen. "However, we still have a lengthy process ahead of us before final investment decisions are made. Aurora LNG has filed its export application just over two weeks after signing a sole proponent agreement with the Province of British Columbia.

CNOOC Limited said that its parent company, China National Offshore Oil Corporation (CNOOC) has signed production sharing contract (PSC) with BP  for deepwater Block 54/11 in Pearl River Mouth Basin in the South China Sea. Block 54/11 is located in Pearl River Mouth Basin in the east part of the South China Sea. It covers a total area of 4,586 square kilometers with water depths of 370- 2,300 meters. According to the terms of the contract, all expenditures incurred during the exploration period will be borne by BP. CNOOC has the right to participate in up to 51% working interest in any commercial discoveries in the block. CNOOC will act as the Operator in the Block.

CNOOC Limited announced its key operational statistics for the first quarter of 2013. During the quarter, the Company achieved a total net production of 93.6 million barrels of oil equivalent (BOE), representing 17.3% increase year over year (YoY), primarily attributable to the production contribution from the acquisition of Nexen Inc ., the new oil and gas projects on stream, the resumption of Penglai 19-3 oil field and the overseas projects. For the first quarter, the Company made four new discoveries and six successful appraisal wells in offshore China. The appraisal confirmed that Penglai 15-2 was a mid to large sized crude oil discovery. In the perspective of overseas development, the Company successfully completed the acquisition of Nexen.

CNOOC Limited announced that Weizhou 6-12 oil field has recently commenced production. Weizhou 6-12 oil field is located in Beibu Gulf Basin in the north part of the South China Sea with an average water depth of about 29.2 meters. The project has 10 producing wells and is expected to hit its peak production in 2013. The Company holds 51% interest and acts as the Operator of Weizhou 6-12 oil field. The partners of this oil field are Roc Oil (China) Company, Horizon Oil (Beibu) Ltd (including Petsec Petroleum LLC) and Oil Australia Pty Ltd. www.cnoocltd.com

CNOOC Limited (SEHK: 00883, NYSE: CEO) and Nexen Inc. (TSX: NXY, NYSE: NXY) announced today that they have entered into a definitive agreement under which CNOOC Limited will acquire all of the outstanding common shares of Nexen for $27.50 per share in cash. The purchase price represents a premium of 61% to the closing price of Nexen's common shares on the NYSE on July 20, 2012, and a premium of 66% to Nexen's 20 trading-day volume-weighted average share price. Total cash consideration of approximately US$15.1 billion will be paid for Nexen's common and preferred shares, and Nexen's current debt of approximately US$4.3 billion will remain outstanding. The transaction, which will be completed by way of a plan of arrangement, is expected to close in the fourth quarter of 2012.

CNOOC Limited (NYSE: CEO, SEHK: 00883) announced that its parent company, China National Offshore Oil Corporation (CNOOC) has signed a production sharing contract (PSC) with Primeline Energy China Limited (PECL) and Primeline Petroleum Corporation (PPC) (jointly as "Primeline") for Block 33/07 in the East China Sea. Block 33/07 is located about 390 kilometers of Shanghai in the East China Sea. It covers a total area of 5877 square kilometers, with water depth of 90 meters. According to the terms of the contract, Primeline will conduct 3D seismic data survey and drill exploration wells in Block 33/07 during the exploration period, in which all expenditures incurred will be borne by Primeline.

CNOOC Limited (NYSE: CEO, SEHK: 00883) announced that the Company has successfully appraised the Penglai(PL)9-1 hydrocarbon bearing structure following the discovery made in 2010. The appraisal confirmed that PL9-1 is a large oilfield. PL9-1 is located in the Miaoxibei uplift in the eastern part of Bohai, with an average water depth of 25 meters. One of the appraisal wells PL9-1-5 encountered oil pay zones in buried hill with total thickness of over 200 meters, and the well was tested to produce around 700 barrels of oil per day. PL9-1 is the largest oilfield among the recent years’ discoveries by scale in Bohai. Furthermore, the Company also made a successful discovery of PL15-2 structure…

Hong Kong - CNOOC Limited announced that its parent company, China National Offshore Oil Corporation (CNOOC), has signed a production-sharing contract (PSC) with Eni China B.V. (Eni) for the deepwater Block 30/27 in South China Sea. Block 30/27, located 400 kilometers off the coast of Hong Kong with a total area of 5,130 square kilometers, is one of the blocks CNOOC offered for foreign cooperation in 2011. According to the terms of the contract, Eni will conduct a 3D seismic survey and drill one exploration well in Block 30/27. All expenditures incurred during the exploration period will be borne by Eni. CNOOC Limited has the right to participate in up to a 51 percent working interest in any commercial discoveries in the block.

China's CNOOC Limited (NYSE: CEO, SEHK: 0883) announced a deepwater gas discovery on Block 64/11 offshore China after the Lingshui 22-1-1 exploration well drilled by its partner, BG Group (BG) , encountered gas-bearing sands.The exploration well is located in Qiongdongnan Basin in the South China Sea, approximately 130 kilometres offshore and in a water depth of 1,338 metres. BG will conduct further analysis of the well results to evaluate the hydrocarbon potential in the Block. Mr. Zhu Weilin, Executive Vice President of the Company commented, “This is the first deepwater well in Qiongdongnan Basin. We are excited about the well results. The company signed the production sharing contract (PSC) with BG for deepwater block 64/11 on 7th June 2006.

CNOOC Limited announced that its two new oil fields, BoZhong (BZ) 26-3 and LuDa (LD) 32-2 in the Bohai Bay have successfully commenced production recently. BZ 26-3 is located in the central part of Bohai Bay, neighboring producing field BZ 25-1S. The field has an average water depth of about 25 meters. The development and production operations of BZ 26-3 mainly rely on the facilities of its surrounding oilfields. With 4 wells online currently, BZ 26-3 is expected to hit its peak production of more than 6,600 barrels per day in 2011. LD 32-2 is located in the Eastern Bohai Bay with water depth of about 25 meters, and adjacent to producing oil field LD 27-2. In order to reduce production cost, a joint development plan was carried out for both LD32-2 and LD27-2 fields.

Chesapeake Energy and CNOOC Limited executed an agreement whereby CNOOC International Limited, a wholly-owned subsidiary of CNOOC Limited, will purchase a 33.3% undivided interest in Chesapeake’s 600,000 net oil and natural gas leasehold acres in the Eagle Ford Shale project in South Texas. The consideration for the sale will be $1.08 billion in cash at closing, subject to adjustment. In addition, CNOOC Limited has agreed to fund 75% of Chesapeake’s share of drilling and completion costs until an additional $1.08 billion has been paid, which Chesapeake expects to occur by year-end 2012. Closing of the transaction is anticipated in the 2010 fourth quarter.

CNOOC Limited announced that Bozhong (BZ) 19-4 (shallow formation) oil field in the Bohai Bay has commenced production recently. This oil field is located in the southwest part of Bohai Bay. With an averaged water depth of about 21 meters, the field is approximately 7 kilometers northwest of BZ 25-1 oilfield. The development and production operation of BZ 19-4 oil field mainly rely on the facilities of BZ 25-1/25-1S oilfield. The field is expected to hit its peak production of more than 15,600 barrels per day within the year. Chen Bi, Executive Vice President of the company, said, “BZ 19-4 oil field is one of the important projects planned to be brought on stream this year. BZ 19-4 (shallow formation) oil field is jointly developed by CNOOC Ltd. and Chevron. CNOOC Ltd.

CNOOC Limited announced a summary of its business strategy and development plan for the year 2010. The total targeted net production of the company in 2010 is 275 million to 290 million barrels of oil equivalent (BOE) (assuming with WTI at $75/barrel). The company’s net production for 2009 is estimated to be 226 million to 228 million BOE (with WTI at $62/barrel). During the year, nine new projects are expected to come on stream, all of which are located in offshore China, including major projects such as Jinzhou 25-1 and Bozhong 19-4. These new projects, together with projects that came on stream in 2009, are expected to strongly support the company’s production growth in 2010.