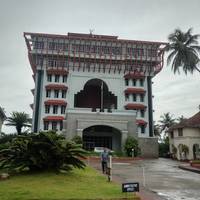 The technology group Wärtsilä will upgrade its Vessel Traffic Management System (VTMS) installed in the Indian port of Cochin, bringing additional benefits such as improved traffic monitoring and control.The system was originally delivered in 2008, and the order with Wärtsilä to upgrade the system was placed in February 2020 by the Cochin Port Trust (CoPT). The upgrading project is scheduled for completion by the end of July 2020.According to Wärtsilä, the upgraded VTMS will enable…

The Suez Canal Authority (SCA) has extended discounts concerning dry bulk vessels operating between American and Asian ports after considering “new changes in the global shipping market and the world economy”."SCA pays more attention to its users best interest, and has recently taken steps towards being the safest, most secure, most reliable and most competitive compared to other routes," said a press release.It said that the rebate granted to (Laden/Ballast) Dry Bulk Vessels operating between Americas' ports and Asian ports… 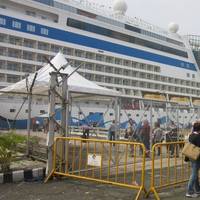 The Government of India has formulated new guidelines in the form of Standard Operating Procedures (SOPs) to handle cruise vessels and cruise passengers in November, 2017.The salient features of these SOPs inter alia includes submission of documents/data electronically, seamless entry and exit process with access control and RFID for vehicles and persons and simplified Port Health Organization Clearance Procedure. It further provides for e-Landing card for shore excursion, doing…

The major ports in India have recorded a growth of 4.77 per cent and together handled 679.35 Million Tonnes of cargo during the period April 2017 to March 2018 as against 648.39 Million Tonnes handled during the corresponding period of previous year. Nine Ports - Kolkata (including Haldia), Visakhapatnam, Paradip, Kamarajar, Chennai, Cochin, New Mangalore, JNPT and Deendayal also registered positive growth in traffic. Cochin Port registered the highest growth of 16.52 per cent, followed by Paradip 14.68 per cent, Kolkata (incl. 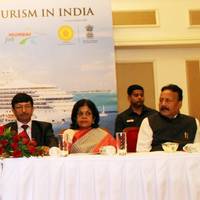 In order to promote cruise tourism in the country the Government of India has exempted cruise tourists arriving with e-visa from the requirement of biometric enrolment for the major ports, said Union Minister of State for Shipping  Pon. Radhakrishnan. The exemption will be in effect in the ports of Mumbai, Cochin, Chennai, Mormugao and New Mangalore for a period of three years till 31st December, 2020. The Government has also taken steps for customer-friendly and hassle-free immigration regime for cruise passengers such as implementation of e-visa and e-Landing cards at the five ports. 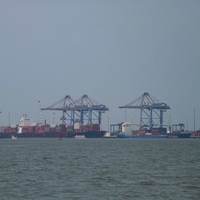 Major ports in India have recorded a cargo traffic growth of 4.58 percent and together handled 560.97 million tonnes (MT) of merchandise during the period April 2017 to January 2018, as against 536.41 MT handled during the corresponding period of previous year. For the period from April 2017 to January 2018, eight ports i.e. Kolkata including Haldia, Paradip, Visakhapatnam, Chennai, Cochin, New Mangalore, JNPT and Deendayal have registered positive growth in traffic. The highest growth was registered by Cochin Port (18.36 percent), followed by Paradip (16.01 percent), Kolkata [incl.

The major ports in India have recorded a growth of 3.64% and together handled 499.41 Million Tonnes of cargo during the period April to December, 2017 as against 481.87 Million Tonnes handled during the corresponding period of previous year. For the period from April- December 2017, Eight Ports (Kolkata (incl.Haldia), Paradip, Visakhapatnam, Chennai, Cochin, New Mangalore, JNPT and Kandla) have registered positive growth in traffic. The highest growth was registered by Cochin Port (17.27%), followed by Paradip (14.59%), Kolkata [incl. Haldia] (12.45%), New Mangalore (6.60%) and JNPT (5.94%).

Major ports in India have recorded a growth of 3.46% and together handled 439.66 Million Tonnes of cargo during the period April to November, 2017 as against 424.96 Million Tonnes handled during the corresponding period of previous year. For the period from April- November 2017, nine Ports (Kolkata (including Haldia), Paradip, Visakhapatnam, Chennai, Cochin, New Mangalore, Mumbai, JNPT and Kandla) have registered positive growth in traffic. The highest growth was registered by Cochin Port (17.93%), followed by Paradip (13.13%), Kolkata [incl.

The Minister of Shipping in India,  Nitin Gadkari has said that Cochin is all set to become a global ship repair hub. He was speaking at Cochin, after laying the  foundation stone for a INR 970-crore (USD 148 million) International Ship Repair Facility (ISRF) for Cochin Shipyard Limited. The facility is being built at Cochin Port Trust where CSL has leased out a 40-acre plot for the project. The International Ship Repair facility will be a State of the Art facility that can handle a major chunk of small and medium sized vessels plying in India.

The major ports in India have recorded a growth of 3.27% during the period April to September, 2017 and together handled 383 Million Tonnes of cargo as against 371 Million Tonnes handled during the corresponding period of previous year. The Eight Ports i.e. Kolkata, Paradip, Chennai, Cochin, New Mangalore, Mumbai, JNPT and Kandla registered positive growth in traffic during the period April to October, 2017. The highest growth was registered by Cochin Port (17.66%), followed by Kolkata [incl. Haldia], New Mangalore, Paradip with growth of about 12%. 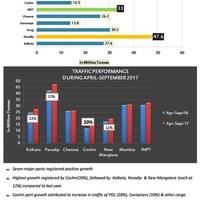 Major ports in India handled 326.4 million tonnes of cargo in the April-September period, an increase of 3.24% over the 316.1 million tonnes they handled a year ago. According to the data released by the ministry of shipping, seven out of the 12 major ports in the country recorded traffic growth in the first half of the current fiscal. Seven Ports (Kolkata, Paradip, Chennai, Cochin, New Mangalore, Mumbai and JNPT) registered positive growth in traffic during the period April to September 2017.

Technological advancement for modernization of major ports and reforms for enhancing ease of doing business are driving and sustaining the growth trend line at India’s major ports. The country’s 12 major ports together handled 273.96 Million Tonnes of cargo between April to August, 2017 as against 265.31 Million Tonnes handled during the corresponding period of previous year, an overall growth of 3.26%. Seven Ports (Kolkata, Paradip, Chennai, Cochin, New Mangalore, Mumbai and JNPT) registered positive growth in traffic during the period April to August 2017.

Eighteen ferry terminals are to be constructed in six Indian cities of Varanasi, Patna, Munger, Bhagalpur, Kolkata and Haldia on the National Waterways-I under the Jal Marg Vikas Project (JMVP). The Inland Waterways Authority of India (IWAI) has engaged a consultant for the preparation of a Detailed Project Report (DPR) for the purpose. The consultants have been tasked to identify suitable locations for construction of the ferry terminals. National Water-way-1 has fixed terminals at GR Jetty-2 (Kolkata), Pakur, Farakka (owned by Farakka Barrage Project) and  Patna (Low level and high level). It also have floating terminals in Haldia- 1…

In order to promote ship building and ship-repair industry in India, the government has formulated a policy of financial assistance for shipbuilding for a period of ten years for contracts signed between 1st April, 2016 and 31st March, 2026. The Financial assistance at the rate of 20% of the contractual price of a vessel, fair price, or actual payments received by the shipyard is payable after delivery of the vessel and as per the guidelines issued by the Ministry of Shipping. There are 18 major ship-repairing facilities on western coast and seven on eastern coast  at present in the country.

The National Green Tribunal (NGT) has given a ‘go ahead’ to Indian Oil Corporation (IOC)’s stalled LPG import terminal project at Puthuvypeen near Kochi in South India. A statement from IOC said that  NGT reaffirmed its previous order dated August 2, 2016, thereby removing the hurdles in resuming its prime infrastructure project in the State. The project work has been stalled since February 15 due to protests, alleging that IOC is violating NGT order. IOC's project was to construct a LPG Import Terminal of six lakh tonne capacity a year at Kochi in Puthuvypeen SEZ of Cochin Port Trust. 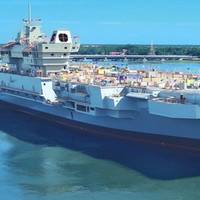 Cochin Shipyard Ltd (CSL),  India's largest public sector shipyard, has filed  initial public offering (IPO)document with  the market regulator Securities and Exchange Board of India (SEBI)  to go public. The government approved a stake sale of up to 25 percent. Cochin Shipyard IPO will consist of 34 million shares to raise about INR 1,400-1,500 crore (USD 214 - 229 million). On completion of a successful IPO, CSL will become the first of five state-owned shipbuilding companies to be publicly listed. It has filed a draft red herring prospectus (DRHP) with SEBI.

The Cochin shipyard Ltd (CSL) has plans to develop a major hub of LNG-based ship building and repair facility that would generate about 3, 000 jobs in the State of Kerala, the Hindu quotes Madhu S. Nair, Chairman and Managing Director of Cochin Shipyard Ltd, as saying. Madhu said that the Indian maritime industry has been lagging behind the global trends due to lack of maritime engineering policies adopted by the sector. He said the Cochin shipyard is keenly looking forward to transforming into a viable ship repair centre.

The Cabinet Committee on Economic Affairs of India, chaired by the Prime Minister Narendra Modi, has given its approval for waiver of penal interest on Government of India (GOI) loans availed of by Cochin Port Trust (CPT) to the tune of Rs 897.23 crore (USD 134 million), providing some financial breathing space for the port. The Cochin Port Trust availed loans for various developmental activities from Govt. of India amounting between1936-37 to 1994-95. Non-repayment of these loans has attracted penal interest to the tune of Rs. 914.80 crore.

Cochin Port is planning a new cruise terminal project at Ernakulam Wharf to accommodate cruise vessels in the most professional manner comparable to international standards. Pon. Radhakrishnan, Hon’ble Union Minister of State for Road Transport, Highways and Shipping, has expressed keen interest in the cruise tourism promotion activities of Cochin Port and assured support for the new cruise terminal project. He also noted that the prospects of domestic cruise tourism in India with cruise ships home-porting at Cochin are high.

Cochin Shipyard Gears Up for IPO 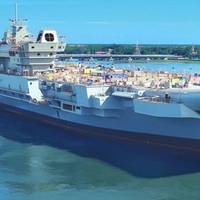 India’s biggest shipbuilder under state control, Cochin Shipyard Ltd (CSL) is looking to file documents for its initial public offering (IPO) with the markets regulator by the end of this month, reports Live Mint. According to sources, CSL is all set to file documents for its IPO of Rs 600 crores ($90 million) with the Securities and Exchange Board of India (SEBI). The plan is part of its effort to expand and construct larger vessels and also undertake ship repair and fabrication. In addition, the government will sell 10% of its stake through the IPO.

Cochin Port, one of the top 12 major ports in the country, has begun coastal transportation of cars, with carrier ship M V Dresden carrying 500 vehicles reached with first consignment. The first call of a Car Carrier ship, M. V. Dresden wad scheduled at Cochin Port  yesterday evening (September 26, 2016). The ship is a foreign carrier of Cyprus registration, which has obtained license for coastal run between the ports in India, and is of 177 m length and 7 m draft. The Car Carrier has the circuit of Ennore-Cochin-Kandla-Cochin-Ennore… 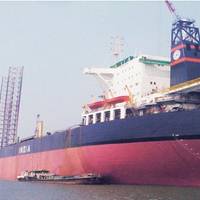