Gulftainer, the world’s largest privately-owned independent port operator and logistics company based in the United Arab Emirates, finalized a 50-year concession agreement with the state of Delaware to operate and develop the Port of Wilmington, significantly expanding the company’s global footprint and reach.The agreement, signed by Gulftainer’s subsidiary GT USA, will see an expected investment of up to $600 million in the port to upgrade and expand the terminal and to turn…

Cosco Shipping Gets US 'Go-Ahead' for OOCL Deal

China’s Cosco Shipping Holdings Co received the clearance  of a U.S. national-security review body, removing a major overhang of the USD 6.3 billion deal of taking over Orient Overseas International Ltd (OOCL). According to a Reuters' report, the U.S. Committee on Foreign Investment in the United States had notified it that it does not have any outstanding security issues following an agreement with the U.S. government to divest the Long Beach container terminal business to a third party. Cosco said the U.S. 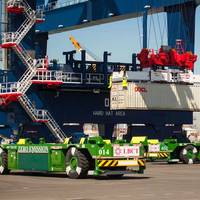 A U.S. national security review has raised concerns about a takeover by China's COSCO Shipping Holdings Co of a large container terminal in Long Beach, California, the Wall Street Journal reported on Friday.The terminal is part of COSCO's planned $6.3 billion deal to buy shipping firm Orient Overseas International Ltd (OOIL) , the Journal reported, citing people familiar with the matter.COSCO executives met with officials at the Committee on Foreign Investment in the United States (CFIUS) this week and proposed to divest or carve out the Long Beach terminal to ease U.S.

Deal waiting for green light from CFIUS, China regulators; COSCO says keeping close eye on US-China trade tensions. COSCO Shipping's planned acquisition of Orient Overseas Container Line (OOCL) is on track to be completed by the end of June, the company's vice chairman Huang Xiaowen said on Tuesday. COSCO is still answering questions from the Committee on Foreign Investment in the United States on the deal, and is also awaiting a number of domestic approvals, Huang told a press conference in Shanghai. He said the deal needed U.S. approval as OOCL had some assets in that country. 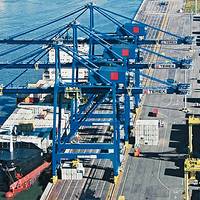 The primary focus of last year’s annual update, which appeared in the April 2010 issue, was U.S. efforts to tighten economic sanctions against Iran. The last several months have seen these efforts come to fruition, as well as imposition of new sanctions affecting Libya, North Korea, and Somalia. Our 2011 update concentrates on these key developments, but readers should be aware that these were not the only changes to sanctions programs administered by the U.S. Department of the Treasury’s Office of Foreign Assets Control (“OFAC”) over the past year. As always, remaining abreast of all applicable embargoes and sanctions must be a priority for international businesses. U.S. Developments. On July 1, 2010, long sought amendments to the Iran Sanctions Act (“ISA”) became law.

Fincantieri - Cantieri Navali Italiani S.p.A., a leader in the commercial and naval shipbuilding industry, signed a definitive acquisition agreement to acquire the Manitowoc Marine Group (MMG), from its parent company, The Manitowoc Company, Inc. [NYSE: MTW]. Lockheed Martin Corporation [NYSE: LMT] has agreed to be a minority investor with Fincantieri in the proposed acquisition. The transaction, that is valued at approx. $120m (subject to certain closing adjustments), is an all-cash deal that is anticipated to close at the end of 2008. The Boards of Directors of Fincantieri and have approved the terms of the agreement. The transaction is subject to customary closing conditions, including clearance from the antitrust authorities.

In its daily press briefing, the White House included a lengthy discussion of the process that led to the Administration’s approval of the acquisition by Dubai Ports World (DPW) of U.S. port facilities owned by P&O Ports. The White House also released a Fact Sheet outlining the Committee on Foreign Investment in the United States (CFIUS). Representative Nadler (D-NY) wants the process stopped until Congress can review it thoroughly. Representative Pallone (D-NJ) is seeking legislation to keep ownership of American ports out of the hands of foreign governments. Representative Saxton (R-NJ) indicated that a Congressional hearing would be held in the near future to examine the planned transaction.

U.S. Senate Majority Leader Bill Frist, M.D. (R-TN) made the following statement on the deal proposed by Dubai Ports World of the United Arab Emirates that would give the company day-to-day management of six major U.S. “Recent reports that a company based in the Middle East is seeking to purchase the operating rights to several U.S. ports raise serious questions regarding the safety and security of our homeland. The decision to finalize this deal should be put on hold until the Administration conducts a more extensive review of this matter. “It is important for Congress be involved in this process. I have requested a detailed briefing on this deal.

Last Monday, a $6.8 billion dollar deal put the operation and control of the major New York and New Jersey ports in the control of a firm in the United Arab Emirates and owned by the Government of Dubai, Dubai Ports World. Today, Senators Chuck Schumer, Tom Coburn, Frank Lautenberg, and Chris Dodd are being joined by Reps. Chris Shays, Vito Fossella and Mark Foley in sending a letter to Treasury Secretary John Snow urging him to review the deal immediately. The deal allows the UAE company to take control of most operations at six ports on the East Coast, including: New York, New Jersey, Baltimore, New Orleans, Miami and Philadelphia.

The AP has reported that a company in the United Arab Emirates is poised to take over significant operations at six American ports as part of a corporate sale, leaving a country with ties to the Sept. 11, 2001, hijackers with influence over a maritime industry considered vulnerable to terrorism. The Bush administration considers the UAE an important ally in the fight against terrorism since the suicide hijackings and is not objecting to Dubai Ports World's purchase of London-based Peninsular and Oriental Steam Navigation Co. The $6.8 billion sale could be approved Monday and would affect commercial port operations in New York, New Jersey, Baltimore, New Orleans, Miami and Philadelphia. DP World said it won approval from a secretive U.S.

Raj: Halter is Back

Anil Raj, president and COO of Halter Marine, in many ways embodies the company for which he has worked for the last 15 years. Joining as the Director, Engineering, Production Controls and Procurement in 1987, Raj has relied on a solid technical foundation, first to help establish and continue the company's reputation as one of the world's most prolific builders of ships and boats, and second to help the company hang on - to customers as well as key technical and production staff, as the company navigated the tumultuous environs following its Chapter 11 filing of April 2001. Despite well-chronicled skepticism, Halter today sits on the verge of a remarkable rebound that could again make it a ubiquitous presence in both commercial and military marine construction.