Liebherr Celebrates 50 Years in the USA 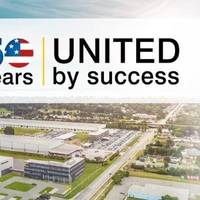 This year Liebherr in the U.S. is celebrating 50 years as a manufacturer in North America.Liebherr has been producing and supplying construction machinery and other technically advanced, user-oriented products and services in the U.S. since 1970. The manufacturer sells and distributes products throughout its own locations and through an independent distribution network.Throughout 2020, Liebherr will focus on 10 innovative product divisions across the U.S. in addition to its commitment to the success of customers…

Port of Baltimore's White to Resign 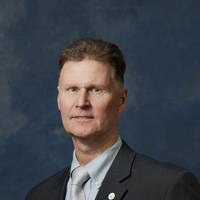 James J. White, Executive Director, Port of Baltimore, announced his resignation effective December 31, 2019.White led operations for 18 years as the Port of Baltimore improved its national rankings, upgraded security procedures and completed infrastructure projects that made it one of the few ports in America capable of receiving the largest ships in the world.Under Executive Director White, the Port of Baltimore leads the nation in handling autos and light trucks, roll on/roll off heavy farm and construction machinery, as well as imported sugar and gypsum.

The Swiss multinational equipment manufacturer Liebherr, has officially opened its new service center in Hamburg. The center, comprising an area of 44,000 square meters in the Kuhwerder.“We are investing in a location which offers long-term potential for growth in several directions. Due to the logistic requirements, the harbour in Hamburg is our central hub for rental and buy-back machines, as well as for all kinds of repairs for the European area,” said Jörg Schmidt, Managing… 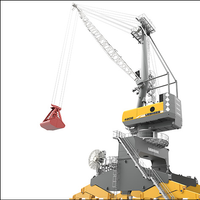 The Liebherr Group notched up a company record turnover of $11.8 million in 2018, representing an increase of $828 million, or 7.5 %, compared with the previous year.Despite a slight decline in overall economic growth, revenues from construction machinery and mining equipment rose by 10.8 % to $7,761 million, with especially strong contributions from the Earthmoving, Mobile Cranes and Mining divisions. In the other product areas, which include Maritime Cranes, Aerospace and Transportation Systems…

The 6,400 standard passenger car capacity, Mitsui OSK Lines (MOL)-operated car carrier Grand Orion has made a first call for such a vessel type in Cambodia.The Japanese shipping company said in a release that the car carrier called at the Port of Sihanoukville, Cambodia, and discharged about 12,000 tons of construction machinery. It was the first call at a Cambodian port by an MOL-operated car carrier, it added.In commemoration of the first call, Grand Orion Capt. Denis C. De…

Mitsui O.S.K. Lines (MOL)announced that the MOL-operated next-generation FLEXIE series car carrier received the Good Design Award  2018, from the Japan Industrial Design Promotion Organization (JDP).This year, MOL's FLEXIE won the award for the first time in nine years as the only winner from the shipping industry. The Good Design Award is in a program to evaluate and encourage design representing Japan, which inherits the Good Design Product Selection System (G Mark System) founded in 1957.Judges highly evaluated the design…

Yanmar Marine Internationalhas appointed Julio Arribas as its South West European Regional Manager, a position that encompasses the roles of General Manager of both Yanmar Equipment Iberica, S.L. and the newly-established Yanmar France SAS.Arribas will spearhead the launch of Yanmar’s strengthened distribution operation and selective dealer network in France after the leading engine and propulsion specialist opened a new sales and customer representative office in La Roche-sur… 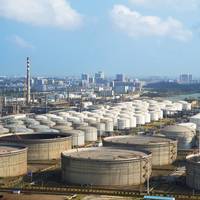 Asian shares fell to a 2-1/2 week low on Monday after U.S. President Donald Trump cranked up trade tensions by going ahead with tariffs on Chinese imports, prompting Beijing to immediately respond in kind.Fears of a global trade war added to pressure on oil prices, which extended Friday's big fall, while the dollar retreated from near 3-week highs against the safe haven yen.Spreadbetters suggested a subdued start for European shares, with FTSE futures off about 0.1 percent. U.S.

Liebherr Expands in the U.S. 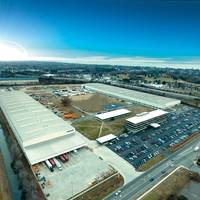 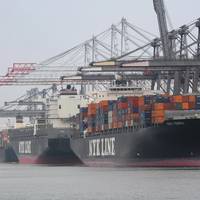 The three big Japanese marine transport firms -  Nippon Yusen Kabushiki Kaisha (NYK Lines), Mitsui O.S.K. Lines and Kawasaki Kisen - are decreasing the number of containerships and bulk carriers in their fleets by 10%, reports Nikkei. This is due to weak market conditions and in response to a persistently bleak business environment brought on by a supply glut. The trio operated 1,266 of the ships in all at the close of the fiscal year ended in March, but that number will fall by 122 ships. While Mitsui O.S.K. 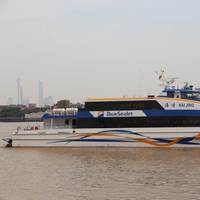 Afai Southern Shipyard (Panyu Guangzhou) Ltd. and CoCo Yachts B.V. announced that the second of the two new fast ferries, Hai Jing, was delivered to Zhuhai High Speed Ferry Company on April 22, 2016. During the sea trials a top speed of 38 knots at full load was measured. According to the builder, special attention has been given to ensure high level of outfitting in the passenger accommodation, both on main and upper deck. Both exterior color design and interior design has been made by Spear Green from Australia. 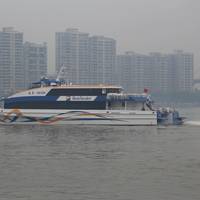 Afai Southern Shipyard (Panyu Guangzhou) Ltd. and CoCo Yachts B.V., announced  that the first of the two  fast ferries was delivered to Zhuhai High Speed Ferry Company in late February. The vessel named HAI QIN recorded a top speed of 38.11 knots at full load on sea trials. The second vessel named HAI JING was launched and sea trials have recently been completed, the company reports.. The performance of HAI JING is identical to HAI QIN in achieving a speed of 38 knots at full load and slightly lower noise levels ( 74 dB(a) on main deck and 70 dB(a) on the upper deck).

A stricken cargo ship drifting on its side off the French Atlantic coast was being towed to the Spanish port of Bilbao on Monday, local officials said. The 164-metre Modern Express, which was transporting 3,600 tonnes of wood along with construction machinery from Gabon to France, had been drifting towards the coast since its crew was evacuated by helicopter last week. The extreme incline of the ship as well as the difficult sea conditions had so far prevented teams from boarding and it would have hit the French shore on Monday or Tuesday if the salvage effort had failed. However, four specialists boarded the ship on Monday as the weather improved and hooked a cable up to the vessel before being winched up into a helicopter.

A stricken cargo ship drifting on its side off the French Atlantic coast will run aground in southwest France if a renewed attempt to tow it to port fails on Monday, a French maritime official said. The 164-metre-long Modern Express, which was transporting 3,600 tonnes of wood along with construction machinery from Gabon to France, has been drifting towards the coast since its crew was evacuated by helicopter last week. Officials believe its cargo may have shifted in heavy seas, causing it to list heavily to one side. The distressed ship was about 100 kilometres from the resort town of Arcachon and would hit the French shore some time between Monday evening and Tuesday evening unless a last salvage effort on Monday is successful…

Ports America Chesapeake and CSX Intermodal Terminals today announced a new agreement designed to immediately enhance the competitiveness of the Port of Baltimore and position it to capture additional freight business through more efficient service. The new agreement transfers operational responsibility for the intermodal container service at the port from CSX Intermodal Terminals to Ports America Chesapeake, consolidating management of the operation and enhancing service through Ports America’s on-dock handling and operational expertise. 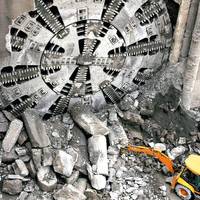 Following the go-ahead from antitrust authorities, on December 1, 2015 ZF has officially taken over the industrial gears and wind turbine gearbox business from Bosch Rexroth AG. With this, some 1,200 employees altogether at the Witten, Beijing and Lake Zurich (USA) locations will thus join the technology company. The purchase price has not been disclosed. For ZF, the acquisition is an entry into the business with large industrial gears that are used in oil rigs, mine vehicles, tunnel drilling machines, or cableways, for instance. 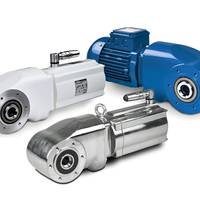 Electric motors are estimated to consume 70 percent of all the energy used in industry. Bearing this in mind, it’s no small wonder that there is an ongoing process of legislation requiring new technologies to adhere to ever higher standards of efficiency. Bauer Gear Motor offers a range of energy efficient solutions that meet current IE2, and future IE3 and IE4, regulations; it recently hosted a technology forum to help its customers understand the latest developments in the industry and discuss the best practices for maximizing energy efficiency in the drive train.

The Helen Delich Bentley Port of Baltimore handled a record 86,149 twenty-foot-equivalent units of total container volume in August as shipping volume continued to swell. August volume of total containers, including empties, rose 12.6 percent year-over-year and surpassed the previous single-month record of 79,644 TEUs in June. Import loads totaled 58,340 TEUs, up 13.2 percent year-over year and just short of the June record of 59,532 TEUs. “The Port of Baltimore continues to demonstrate why it’s so important to the overall economic success of our state,” said Governor Larry Hogan.

Helen Delich Bentley Port of Baltimore's public terminals shipped a record 9.74 million tons of general cargo in the 2015 fiscal year ending June 30, it said Monday. That was up about 1.5 percent from 9.6 million tons in 2014. General cargo includes automobiles, forest products, farm equipment and construction machinery. It also includes containers, a key point of emphasis lately for port officials trying to grow traffic. The new records include: most general cargo tons in a fiscal year at 9,742,050 tons.

Maersk Returns to the Port of Baltimore 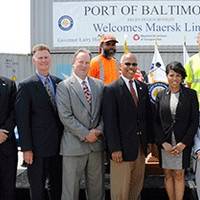 Maryland Lt. Governor Boyd Rutherford, along with congressional, state and local officials, officially welcomed Denmark-based Maersk Line, part of the Maersk Group and the world’s largest container shipping company, to the Helen Delich Bentley Port of Baltimore. Maersk, which has a leading 15 percent market share of the global container business, began operating three weekly container services involving the Port of Baltimore earlier this year and will bring an estimated 31,000 new containers per year.

CMA-CGM to Call Port of Baltimore

International container shipping company CMA-CGM of France announced that it will begin service within the next couple of weeks to the Helen Delich Bentley Port of Baltimore. The Port of Baltimore has been added to CMA-CGM’s Liberty Solo service which also includes visits to ports in Rotterdam, Bremerhaven, Le Havre, New York, and Charleston. “This is great news for the Port of Baltimore and for the thousands of men and women who work here,” said Maryland Port Administration (MPA) Executive Director James J. White. “CMA-CGM is one of the largest container shipping companies in the world. The Port of Baltimore averages nearly 40 container moves per hour per crane, one of the fastest and most efficient rates among East Coast ports.

Total cargo volumes were 10,526,732 metric tonnes (MT) in 2014, representing a 5% increase over 2013. The port welcomed 157 ships from overseas in 2014, with the balance (462) operating within the Canada/US Great Lakes. Overseas tonnage was 2 million tonnes, a gain of 39 percent year-over-year and the highest volume of overseas cargo in a decade. The Port of Hamilton is the largest port in Ontario. A multimodal hub with full Seaway-depth marine capacity, goods can be imported from, and exported to, anywhere in the world.