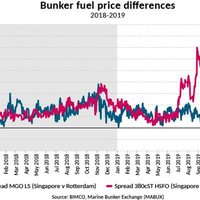 The oil market has recently been shaken up by geopolitical events, but volatility in the price difference between low and high sulphur fuel cannot be explained by that alone – the uncertainty is the chaos factor.The uncertainty of the upcoming IMO 2020 Sulphur cap regulation (IMO2020) is having a big impact on the bunker market. Whereas, the price for Marine Gas Oil Low Sulphur (MGO LS) has largely remained stable, the price for High Sulphur Fuel oil (HSFO) has been become increasingly more volatile in recent months. 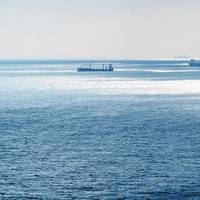 Intercontinental Exchange (ICE), the operator of global exchanges and clearing houses and provider of data and listings services, launched a further nine Marine Fuel 0.5% futures contracts in advance of the implementation of the 0.5% sulfur cap by the International Maritime Organization (IMO) in January 2020.The American company that owns exchanges for financial and commodity markets announced that its new futures contracts expand the existing suite of Marine Fuel contracts launched… 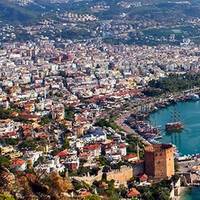 The Intercontinental Exchange will launch new Marine Fuel 0.5% futures contracts in advance of the implementation of the 0.5% sulphur cap by the International Maritime Organization (IMO) in 2020.The operator of global exchanges and clearing houses and provider of data and listings services said in a press release that the new contracts are expected to launch on February 4, 2019, subject to completion of relevant regulatory processes.The new contracts have been developed in response… 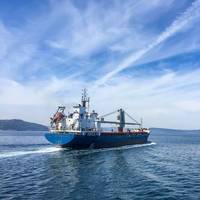 Commodity firms and banks have been diving into blockchain pilot schemes over the last two years but the new technology's application for most trading has likely been over-hyped, a report by Boston Consulting Group (BCG) said.Blockchain, originally the platform behind cryptocurrency Bitcoin, is viewed by some as a solution to inefficiencies, improving transparency and reducing to the risk of fraud. But BCG believes its potential has been exaggerated.A high-tech ledger, blockchain… 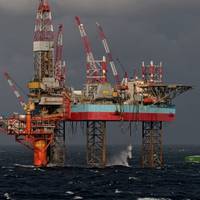 The impact of the oil market cycle reaching its bottom was felt in Bourbon in the first half of 2016, as the company announced first half 2016 adjusted revenues of €599.2 million, a 21 percent decline year on year and 11.7 percent reduction compared to 2H 2015. Bourbon believed that its large market share and young fleet were keys to keeping it stronger while others failed, but it appears that the market has caught up to the company too. -- In the segments Deep and Shallow water, Bourbon anticipates the bottom of the market in Q3 2016, due to the late cyclical nature of this business.

China's imports of crude oil rose 7.6 percent in April from a year ago, customs data showed on Sunday, lifted by continued strong demand from domestic private refiners. The high April inflows were a result of the strong appetite of small domestic independent "teapot" refineries. Beijing has granted licenses to more than 20 of them since last year to import crude for the first time. China imported 32.58 million tonnes of crude oil in April, data from the General Administration of Customs showed, missing a Reuters forecast.

Tender deals helped to liven up a lacklustre West African crude oil market on Thursday, though overall demand remained weak. Indian Oil Corporation bought four cargoes of West African oil, traders said, nibbling at an overhang of unsold September cargoes just a few days before Angola's October loading programme comes to market. Traders were watching to see whether there could be an impact on Chinese imports of West African oil after two huge explosions in the northeast Chinese port city of Tianjin killed at least 50 people, including at least a dozen fire fighters. One trader said there was no immediate impact for oil cargoes already in the area.

Activity across Port of Houston Authority docks continues to show strength as February 2015 tonnage figures reflected a 22-percent increase compared to February 2014. Executive Director Roger Guenther released the information today during the monthly meeting of the Port Commission of the Port of Houston Authority. Guenther reported that the Port Authority's Barbours Cut and Bayport container terminals were particularly busy. A combined 40 percent more loaded containers than a year ago was handled. ". . 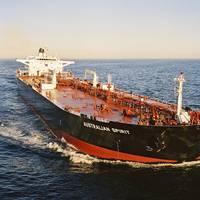 The oil price drop will hand tanker markets an unexpected bonus next year, boosting demand for oil storage at sea while distant eastern markets also bargain-hunt fuel and need shipping. Supertanker rates are already close to five-year highs of over $83,000 a day - helped by a drop in shipping fuel bunker prices. Overcapacity, which has dogged owners for years, is also receding. Herbjorn Hansson, chairman and chief executive of Nordic American Tankers, told shareholders recently that lower oil prices "may trigger stockpiling or have a more general positive impact".

Top oil exporter Saudi Arabia told OPEC it raised its oil production in September by 100,000 barrels per day, adding to signs it has yet to respond to a drop in prices well below $100 a barrel by trimming output. In a monthly report issued on Friday, the Organization of the Petroleum Exporting Countries (OPEC) said Saudi Arabia reported September production of 9.704 million barrels per day (bpd), up from 9.597 million in August. The lack of a Saudi cut could add to perceptions of traders and analysts that the kingdom is looking to defend market share, not prices. Oil in September fell below $100 a barrel, a level endorsed by Saudi Arabia, for the first time in 14 months and hit $88.11 on Friday, its lowest since 2010. 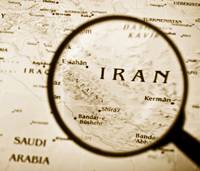 Iran, Syria, Sudan, Libya, Nigeria and now Iraq: the crude oil market has weathered a long list of actual and threatened supply shocks with remarkable calm. According to the U.S. Energy Information Administration (EIA), unplanned disruptions have removed around 2.5 million barrels per day from the crude market since the start of 2011. But for most of that time, Brent, the international marker, has traded in a narrow range around $105 per barrel and daily price volatility has fallen to the lowest level for 20 years.

The U.S. Gulf Market: When Will It Turn Around?

Discussions around our office and with various clients usually entail an exchange of anecdotal information believed to explain the current situation with the quest to predict when things will turn around. There are a host of different viewpoints, most seemingly relevant, but no one satisfactory answer. In previous downturns in the offshore service sector, there was usually a fairly clear understanding embraced by most of why things were slow. This downturn is more difficult to understand. Back in 1998 when the Asian financial crisis impacted oil prices, it was easy to see why E&P fell. This downturn also affected most oil fields around the world about the same. The price of oil was too low to drill new wells and upgrade production at a profit.