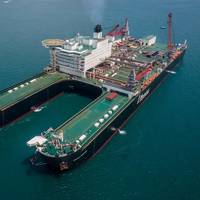 Sonardyne’s Ranger 2 Ultra-Short Baseline (USBL) acoustic positioning system has been selected by the Swiss-based Allseas Group for the world’s largest pipelay and platform installation/decommissioning vessel, Pieter Schelte. Built by Daewoo Heavy Industries in South Korea, at 382 meters long and 124 meters wide, Pieter Schelte is almost as long as the Empire State Building and as wide as London’s Big Ben is tall. When complete early next year, the vessel will be able to lift loads of 48…

Daewoo Heavy Industries Ltd. is reportedly looking to set up a shipbuilding joint venture but will not give up management of its shipbuilding division.

Bergesen DAY. ASA plans to buy a liquefied natural gas (LNG) carrier from South Korea's Daewoo Heavy Industries Ltd. for approximately $150 million, company officials said. Under the preliminary agreement, the vessel would have a capacity of 138,000 cu. m. and be delivered in the first quarter of 2003, officials said. The final agreement is expected to be signed by early April 2000. Bergesen will also have an option to order an additional LNG-carrier for delivery in the second half of 2003.

The ultra competitive Greek ferry market has not only proven to be a fertile breeding ground for advanced marine technology, it has served as a role model for the direction of shipping services in both the region and the world. The Greek market has provided the collective builders and suppliers of advanced fast and conventional ferries a rich environment for business over the past few months, a trend that seems likely to continue. Specifically, Greek owners and operators have been at the forefront of an international buying binge for large, fast passenger, vehicle and cargo carrying craft. Driven by the need for speed, many owners are turning to advances in marine electronic and propulsion systems to ensure that the multi-million dollar investments are kept running safe and efficient.

Daewoo Heavy Industries Co. (DHI)announced a loss in the first- half of this year of 337.7 billion won ($302.9 million), compared with net income of 53.2 billion won in the same period last year. DHI is undergoing a reorganization to divulge itself of money-losing operations, as are many of the large Korean industrial conglomerates. Current plans plans call for a split in the shipbuilding and construction equipment businesses into separate units, leaving the remaining company with nonoperating assets, including stakes in Daewoo Motor Co. The division is set for Sept. 1 after several delays. Sales totaled 2.08 trillion won, down from 3.11 trillion won in the same period in 1999, in part because a stronger won meant dollar-denominated ship sales converted into fewer won in the accounts.

South Korea's Daewoo Heavy Industries has received a letter of intent from Australia's New Castle Heavy Industry expressing interest in taking a stake in its shipbuilding unit. While exact terms of the potential deal are not yet available, it is believed that DHI would be willing to sell up to a 30 percent stake. The world's second largest shipbuilder is one of 12 debt-laden Daewoo Group firms that creditors hope to reform and sell off. Daewoo Heavy is expected to be split into three units covering shipbuilding, machinery and a company to manage its debts.

Daewoo To Split Into Three Units

South Korea's Daewoo Heavy Industries Co apparently plans to split into three units on October 23, pending an approval from its board of directors. It's unknown at present how the spin off will effect the world's second largest shipbuilder. The company planned to divide its shipbuilding and machinery operations and form a third company to manage its debts. The machinery and shipbuilding units are expected to list separately around December 20, pending approval from the Financial Supervisory Service.

Tribon Solutions has signed a $ 4.5 million, 3-year contract with Daewoo Heavy Industries to supply and implement the Next Generation of the current Tribon M1 product on Windows NT. This Tribon Mx Series development will lead to Tribon M2 and Tribon M3 systems. Tribon Mx Series development will be focused to greatly extend the Outfitting and Data Management functions in the current Tribon M1. Daewoo will contribute both requirements and partial financing for the Tribon Mx Series development. This contract is based on the already successful implementation of Tribon at Daewoo for commercial hull design and the complete use of both hull and outfitting functions at Daewoo Special Ships Division for in particular the Korean KDX1 Frigate and some recent orders for Passenger RoRo vessels.

For an independent tanker owner to undertake a newbuild fleet development program amounting to 3-million tons of crude oil carrier capacity in itself demonstrates a high degree of business verve. But to emphatically put one's own stamp on the design, construction and equipping of such tonnage is an added expression of will, given the production-driven tendency in the industry towards shipyard-orientated and class-minimum specifications. Piraeus-based Hellespont Shipping Corp.'s commitment to a new generation of ultra large crude carriers (ULCCs) is exceptional on its own account, given the paucity of new investment in the category over the past quarter-century.

For the year 2000, Wärtsilä Corporation reports that 24 Sulzer RTA84T low-speed diesel engines with an aggregate power output of 713.4 MW (970,800 bhp) have been ordered for installation in very large tankers contracted at shipyards in China, Japan and South Korea. The engines will all be built by licensees of Wärtsilä in Japan and Korea. Altogether there are now 78 Sulzer RTA84T engines (including the -B and -D versions) delivered or on order, with a combined output of 2171.9 MW (2.95 million bhp). Ten 305,000 dwt oil tankers recently contracted in China and South Korea by National Iranian Tanker Co (NITC) will each be propelled by a seven-cylinder Sulzer RTA84T-B low-speed diesel engine.

For the year 2000, Wärtsilä Corporation reports that 24 Sulzer RTA84T low-speed diesel engines with an aggregate power output of 713.4 MW (970,800 bhp) have been ordered for installation in very large tankers contracted at shipyards in China, Japan and South Korea. The engines will all be built by licensees of Wärtsilä in Japan and Korea. Altogether there are now 78 Sulzer RTA84T engines (including the -B and -D versions) delivered or on order, with a combined output of 2,171.9 MW (2.95 million bhp). Ten 305,000 dwt oil tankers recently contracted in China and South Korea by National Iranian Tanker Co (NITC) will each be propelled by a seven-cylinder Sulzer RTA84T-B low-speed diesel engine.

The shipbuilding unit of South Korea's troubled Daewoo Group expects a net profit and more profitable orders in 2001 as it charts a new, independent course. Daewoo Shipbuilding & Engineering Co, split off from troubled Daewoo Heavy Industries last October, said it aimed for net profit of $156.7 million this year, buoyed by strong global orders. "It looks certain that Daewoo Shipbuilding has a great business year ahead of it," said Song Sang-hoon, analyst at Dongwon Economic Research Institute. It also plans to repay 200 billion won of debt this year to free itself from a debt restructuring program undertaken by its creditors in 1999, Daewoo officials said. "Our losses in the past stemmed from problems of other Daewoo affiliates," shipyard spokesman Kim Do-kyun said.

The head of South Korea's Daewoo Shipbuilding said on Friday the won's depreciation would raise the company's operating profit by about 43 percent from its earlier target. "If the (dollar/won) exchange rate stabilizes above 1,300, our operating profit will rise to about 300 billion won ($222.7 million) this year against an earlier target of 210.7 billion won," a high-ranking Daewoo official said. Daewoo Shipbuilding & Marine Engineering Co., which was spun off from Daewoo Heavy Industries last October along with another unit, earlier made this year's forecast on the assumption the exchange rate would be around 1,200. The official was quick to add that graduation from creditors' workout program would be possible by end-June, six months ahead of the year-end target.

The European Union is proposing to subsidize its embattled shipyards in a long-standing dispute over what it views as unfair competition from South Korea. The EU will make the proposal to an EU industrial council meeting in Sweden on May 15, said EU Ambassador to Korea Frank Hesske. Sweden is the current president of the 15-member group. The EU, which has been holding talks with South Korea about the issue for the past two years, could take the case to the World Trade Organisation (WTO), but that could take many years, thus the move for a subsidy program of its own. Hesske said the South Korean government was supporting the Korean shipbuilding industry through debt forgiveness programs by state-controlled banks.

South Korea's Daewoo Shipbuilding & Marine Engineering said it earned 100.4 billion won ($76.34 million) in EBT (earnings before taxes) during the first quarter on sales of 682.7 billion won. In the previous October-December quarter, the world's second largest shipyard made 76.5 billion won of EBT on sales of 781.5 billion won. The year-on-year comparison was not available because the shipbuilder, along with another unit, was spun off from Daewoo Heavy Industries last October. Daewoo said in a statement it had received shipbuilding orders worth $2.28 billion during the first four months of this year, about 91 percent of its $2.5 billion target for the year. The company's statement said EBT would reach 221.6 billion won this year, up from an earlier target of 153.3 billion won.

EU to S. Korea: Agreement on Subisdies Soon Or Else

The European Union's executive body proposed starting a World Trade Organisation (WTO) dispute against South Korea over alleged subsidies to its shipyards unless a deal could be reached by June 30. At the same time, the European Commission said it would propose allowing temporary government aid for European shipyards hit by South Korean competition for the duration of the WTO case. Both proposals will be discussed by EU industry ministers who meet on May 14 and 15. "Although we have not closed the door to an amicable solution with the Korean authorities, the clock is now ticking," EU Trade Commissioner Pascal Lamy said. The Commission…

Daewoo Heavy Industries has agreed to build two 442,500 dwt, ULCCs for Majestic Shipping Corp., a subsidiary of Loews Corp. Majestic also has options with Daewoo to build two additional vessels. Another Loews subsidiary, Hellspont Shipping Corp., recently contracted for Samsung Heavy Industries to build three 303,000 ton VLCCs and agreed to an option to build one additional ship. Delivery of the new vessels from both Korean shipyards is scheduled to begin in the fourth quarter of 2001.

Daewoo Expected to Rise Up From Debt Rescheduling

South Korea's Daewoo Shipbuilding & Marine Engineering is set to graduate this week from a creditors' debt rescheduling plan, a move that will shore up credit ratings for the world's second-largest shipbuilder. An early end to the plan was widely anticipated as the shipyard has shown a dramatic turnaround with a flood of new orders, creditors said on Monday. "The company's earnings performance has improved dramatically," said Yang Moon-suk, a spokesman for Korea Development Bank, the main creditor for the shipbuilder. "Working-level officials of creditors have already agreed that Daewoo Shipbuilding is now able to stand on its own and an announcement is due by Friday," he added.

Hual AS, one of the largest operators within international car transportation, has accepted delivery of the second and third ships in a series of six; the first, Hual Trader was sent by Daewoo Heavy Industries this past December. The second and third ships, Hual Carolita and Hual Transporter, were delivered by Tsuneishi Shipbuilding, Japan; and Gdynia Shipyard, Poland, respectively, last May. Boasting almost identical specifications, the series of 21,400-dwt ships features a length of 656 ft. (200m), and a speed of about 20 knots. Each of the vessels include room for 6,200 standard sized cars or a mix of lorries, cars and construction machinery.