The international ship-owning company Top Ships announced that its 50% subsidiaries which own M/T Holmby Hills and M/T Palm Springs entered into agreements to sell both vessels to unaffiliated third parties.According to the owner and operator of modern, fuel efficient "ECO" tanker vessels, the vessel sales are subject to customary closing conditions and are anticipated to be concluded during March 2020.The two MR2 tankers are owned by Evangelos Pistiolis-led Top Ships  in a 50…

TOP Ships Gets Loan for a Tanker

Top Ships, a provider of oil, petroleum products and chemicals transportation services, has concluded a financing agreement with an undisclosed Chinese financier to refinance one of its MR2 tankers.The  Greek tanker owner and operator said in a press release that the gross proceeds from the new financing amount to $25.6m and will be used mainly to refinance the facility of M/T Stena Weco Excellence with Nord LB.The tenor of the new facility is 10 years, it added.The company also announced that it intends to enter into 2 additional Financing Agreements with the same financier at similar terms… 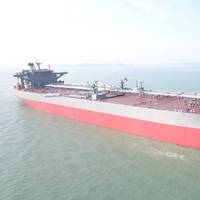 TOP Ships announced that it took delivery of the 157,000 dwt newbuilding Suezmax vessel M/T Eco Bel Air, constructed at the Hyundai Samho shipyard in South Korea.Evangelos Pistiolis, the President, Chief Executive Officer and Director of the company, said: “The delivery of the M/T Eco Bel Air marks our comeback in the Suezmax tanker segment after almost 11 years. As of today, the total tonnage of our fleet on the water is 737,000 deadweight tonnes and our fleet has an average age of two years.

Top Ships Inc, which owns and operates tanker vessels worldwide, said that it took delivery of the 50,000 dwt newbuilding product/chemical tanker M/T Eco Marina Del Ray.According to the international owner and operator of modern, fuel efficient "ECO" tanker vessels currently focusing on the transportation of petroleum products, Eco Marina Del Ray is constructed at the Hyundai Mipo shipyard in South Korea.The Greece-based company also said that the vessel is scheduled to commence its five-year charter employment with Cargill on March 18…

TOP Ships, an international owner and operator of modern, fuel efficient “ECO” tanker vessels currently focusing on the transportation of crude oil and petroleum products, announced that it has concluded Financing Agreements with a major Chinese leasing company, via sale and leaseback transactions of up to $92.5 million for its Suezmax newbuilding vessels with hull numbers 874 and 875, currently under construction at Hyundai Samho Heavy Industries Co., Ltd. in South Korea. The company also announced that it has increased the maximum borrowing capacity of the Family Trading Credit Facility to $25.0 million and that it has drawn down an additional $5.0 million from the Company’s outstanding loan facilities.

Greece-based ship-owning company TOP Ships announced that it has agreed a new time charter employment contract for 2 years with BP Shipping Ltd for its product/chemical tanker M/T Eco Revolution.The international owner and operator of modern, fuel efficient “ECO” tanker vessels currently focusing on the transportation of crude oil and petroleum products, said in a press release that the new time charter will commence in January 2019 immediately after the expiry of the present…

TOP Ships, an international owner and operator of modern announced that, effective immediately, it is terminating the equity distribution agreement with Maxim Group LLC providing for the “at-the-market” equity offering program (ATM Offering).The international owner and operator of modern, fuel efficient "ECO" tanker vessels currently focusing on the transportation of petroleum products also announced that it is in discussions and has received indicative terms from financial institutions for the financing of the M/T’s Eco California…

TOP Ships Inc. an international owner and operator of modern, fuel efficient "ECO" tanker vessels currently focusing on the transportation of petroleum products, has announced that it entered into a sale and leaseback agreement and a 5 year time charter with Cargill International SA (“Cargill Ocean Transportation”) on June 29, 2018, a leading vessel operator and freight-trading business in the bulk shipping sector, for its newbuilding vessel Hull No 8242 currently under construction at Hyundai Mipo Dockyard Co., South Korea. Consummation of the deal is expected to take place on the vessel’s delivery date currently planned for January 2019. Following the sale, the company will bareboat charter back the vessel and immediately put it on a 5 year time charter with Cargill Ocean Transportation. 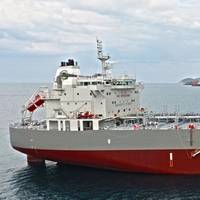 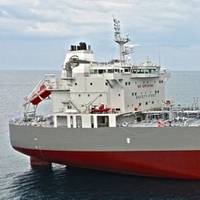 TOP Ships has acquired all of the outstanding shares of PCH77 Shipping Company Limited, a Marshall Islands company that owns a new building contract for M/T Eco California from an entity affiliated with the Company’s Chairman and Chief Executive Officer, Evangelos Pistiolis. Eco California is a high specification 50,000 dwt Medium Range (MR) product/chemical tanker under construction at Hyundai Mipo Dockyard Co., Ltd. in Korea. The Republic of The Marshall Islands incorporated Company paid $3.6 million for the outstanding shares and the vessel is scheduled for delivery during January 2019.

Top Ships Inc. (TOPS) has taken delivery of the M/T Nord Valiant, a 50,000 dwt fuel efficient "ECO" MR product tanker, the final vessel under construction in the Company's fleet. TOPS is an international owner and operator of modern, fuel efficient “ECO” MR tanker vessels focusing on the transportation of petroleum products. Evangelos Pistiolis, President and CEO of the Company, stated, "The six vessel newbuilding program which started in 2014 is now successfully completed. TOPS…

TOP Ships Inc., an international owner and operator of modern, fuel efficient "ECO" MR tanker vessels focusing on the transportation of petroleum products, announced today that it has terminated the charter parties of M/T EShips Taweelah, Hull number S407 and Hull number S414 with Emirates Ship Investment Company (ESHIPS) LLC and that it has entered into new charters for these vessels with Stena Weco A/S. As a result of this termination, ESHIPS will pay the company a compensation of $500,000. The new charters are for 3 + 1 + 1 years at $16,200 per day for the first three years, $17,200 per day for the first optional year and $18,000 per day for the second optional year.

in China. of 18 months at a daily net rate of $25,650 on a bareboat basis. One 1995 built panamax vessel of 73,506 dwt, built in South Korea. net rate of $29,700. One 2000 built handymax vessel of 45,526 dwt, built in Philippines. net rate of $22,000. which is expected to be granted by July 16, 2007. The vessels are scheduled to be delivered to the Company between September 2007 and January 2008. Evangelos Pistiolis, the Company's CEO, said "This acquisition represents the Company's first entry into the drybulk sector, which has demonstrated significant growth in the past few years and is expected to remain robust based on strong fundamentals.