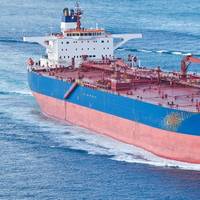 The United States and its allies may need to to start escorting commercial vessels to prevent further attacks in Gulf oil shipping lanes, Gulf sources and experts said.Even then, the conventional naval and air capabilities of Western and Gulf powers tasked with policing vital commercial waters may be of limited use against the asymmetric warfare tactics suspected in recent operations, including naval mines.Six tankers have been hit in the past month in two attacks near the Strait of Hormuz… 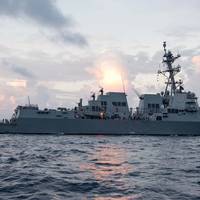 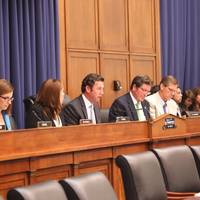 The subcommittees are meeting today to examine the efforts of the Department of Homeland Security to prevent the smuggling of nuclear materials in U.S. ports and other port security risks. This hearing follows last year’s hearing which examined the prevention and response to a dirty bomb at a U.S. port. It seems clear that Islamic extremists aspire to carry out a radiological attack, so this is a threat we need to take seriously. If they succeed even once, the consequences would be catastrophic. To be prepared, we must ensure that we have the proper screening and response protocols in place. 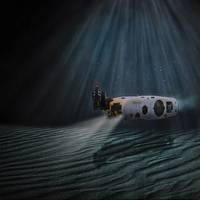 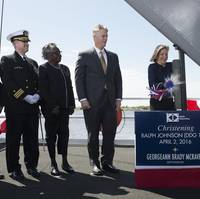 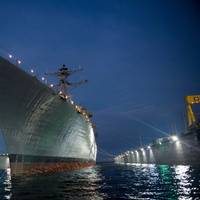 Huntington Ingalls Industries’ (HII) Ingalls Shipbuilding division launched Ralph Johnson (DDG 114), the company’s 30th Arleigh Burke-class (DDG 51) guided missile destroyer, on Saturday. Ingalls has built and delivered 28 Arleigh Burke-class destroyers. There are currently four more under construction at Ingalls, including Ralph Johnson, which is scheduled to be christened in the spring of 2016. John Finn (DDG 113) was christened in May and is expected to undergo sea trials in 2016.

According to The China People's Daily, Indonesia has just sank a large Chinese vessel and 40 other foreign ships caught fishing in The South China Sea. The Jakarta Post cited Maritime Affairs and Fisheries Minister Susi Pudjiastuti as saying that the Gui Xei Yu 12661, a steel-made, 300-gross-ton boat, was sunk on Wednesday in Pontianak, West Kalimantan after it was detonated by the ministry with an explosive device planted on it. AP confirms that Indonesian authorities blew up and sank the 41 foreign fishing vessels as a warning against poaching in the country's waters. 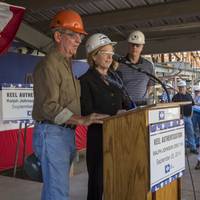 Thad Allen at the Helm 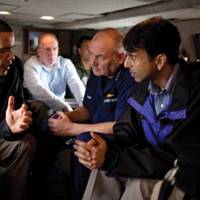 Former USCG Admiral Thad Allen is a transformational leader in the history of the service, a rock through thick and thin. Today he talks about resource allocation, risk management and homeland security. As part of Booz Allen Hamilton’s Justice and Homeland Security business group, Executive Vice President and former U.S. Coast Guard Admiral Thad Allen leads the development of thought leadership and client engagements regarding the future direction of law enforcement and homeland security. The Coast Guard is under pressure to either pare its mission mix or downscale what it does. 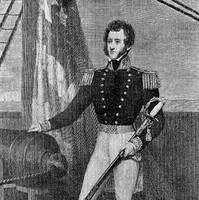 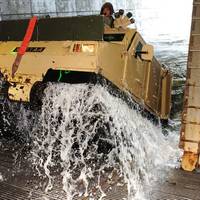 UK MOD announce Viking amphibious all-terrain vehicles to be regenerated under a  £37-million contract with BAE Systems. Used extensively by the Royal Marines, the 99 Viking BVS10 vehicles, which can be launched straight from the stern of a ship and propelled through water before landing for a beach assault, are in line for a major overhaul by BAE Systems. They were deployed to Afghanistan in 2006 for their versatility across tough terrains before they were later replaced by Warthog.

Secretary of the Navy Ray Mabus announced today the next five Navy ships; three Arleigh Burke class guided-missile destroyers, the USS John Finn, the USS Ralph Johnson, and the USS Rafael Peralta, and two littoral combat ships (LCS), the USS Sioux City and the USS Omaha. Mabus named the three destroyers after Navy and Marine Corps heroes whose actions occurred during different conflicts which spanned several decades, but were united in their uncommon valor. The littoral combat ships were named after two American communities. John Finn, who retired as a lieutenant, received the Medal of Honor from Adm. Chester Nimitz for displaying "magnificent courage in the face of almost certain death" during the Japanese attack on military installations in Hawaii during Pearl Harbor. Marine Corps Pfc.

This Day in Naval History – August 13

The Department of Homeland Security (DHS) said that over $3 billion is being allocated for various homeland security grant programs in fiscal year 2008. As indicated in the Overview, the Port Security Grant Program (PSGP) is funded at $388.6 million for FY08. Eligible applicants for port security grants include: owners and operators of federally regulated terminals, facilities, or US inspected passenger vessels; port authorities or other state and local agencies that provide layered security protection to federally-regulated facilities; consortia of local stakeholders (such as river groups, ports, and terminal associations) representing federally-regulated ports…

By John J. After a wide-ranging tour of Naval District Washington (NDW) West in Dahlgren, Va., Senator John W. Warner, R-Va., told reporters at a news conference last week that the Naval Surface Warfare Center Dahlgren Division (NSWCDD) is transforming itself to face the present and future on many fronts by producing advanced technological products that have a crucial impact in the support and protection of deployed warfighters fighting the Global War on Terrorism. “I have seen some absolutely fascinating technology in the minds of the core of civilians and military that operate here…

DoN Budget Request for FY08 Addresses Near and Long-term Needs

The nation’s top Navy and Marine Corps leaders told members of Congress March 1 that the Department of the Navy’s (DoN) proposed $139.8 billion budget request for fiscal year 2008 (FY08) fully supports near and long-term warfighting requirements and will help win the global war on terror (GWOT). In testimony before the House Armed Services Committee, Secretary of the Navy (SECNAV) Donald C. Winter, Chief of Naval Operations (CNO) Adm. Mike Mullen and Commandant of the Marine Corps Gen. James Conway thanked lawmakers and the American people for their continued support and stressed the impact of DoN’s FY08 budget request on future readiness.

Congress has passed the Security and Accountability for Every (SAFE) Port Act of 2006, the first legislation of its kind to authorize an annual federal funding level to help secure United States ports against terrorism. The bill, H.R. 4954, calls for $400m in federal Port Security Grant (PSG) funding for each of the next five years to help increase security in the maritime transportation system. recognized Representatives Dan Lungren (R-CA) and Jane Harman (D-CA) for introducing and moving their version of the port security legislation through the House. He credited Senators Susan Collins (R-ME; chair, Senate Committee on Homeland Security & Government Affairs) and Patty Murray (D-WA)…

The Senate Committee on Homeland Security and Governmental Affairs conducted a hearing entitled Homeland Security: The Next Five Years. As explained in her opening statement, Senator Susan M. Collins (R-ME) wants to assess the homeland security challenges the next five years will bring. Michael Chertoff, Secretary of Homeland Security, discussed those challenges, including port and maritime security. He noted that not every risk can be eliminated, so the goal is to prioritize the threats and address those of highest importance. Among the various witnesses, Richard A. Falkenrath, Deputy Commissioner for Counterterrorism, New York City Police Department, stated that the threat of a weapon of mass destruction in a shipping container has been exaggerated.

The Senate Armed Services Committee approved a $517.7b fiscal 2007 defense authorization bill, a 4 percent increase over the amount authorized by Congress last year. The bill, which includes a $50b bridge fund to pay for operations in Iraq and Afghanistan during the first six months of fiscal 2007, totals $4.8b more than authorized by the House Armed Services Committee. The Senate panel, which met behind closed doors, boosted funding for several weapons programs, including the addition of $1.5b to the Navy's shipbuilding accounts, largely due to concerns about the "declining size of the fleet," according to a summary of the bill released by the committee.