Deal covers nine anti-submarine warfare ships; BAE beat Italy's Fincantieri and Spain's Navantia. Britain's BAE Systems PLC has won a A$35 billion ($25.7 billion) contest to deliver anti-submarine warfare frigates for the Australian navy, the Australian government said on Thursday. The nine ships, to be designed by BAE and built by government-owned ASC Shipbuilding in Australia are expected to underpin the country's maritime combat capability for decades to come, the Australian government said in a statement. "The Hunter class will provide the Australian Defence Force with the highest levels of lethality and deterrence our major surface combatants need in periods of global uncertainty," it said of the ships. Australia is a steadfast U.S.

Only One Bidder for STX France 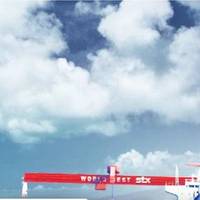 The South Korean court handling the bankruptcy proceedings of STX Offshore & Shipbuilding Co. said that only a single bidder had submitted a binding proposal to buy the shipyard's profitable French unit, says a report by AFP. STX France, which specialises in building cruise ships, is the only profitable unit of STX Offshore, which filed for receivership in May. Italian shipbuilding giant Fincantieri SpA, Netherlands-based Damen Shipyards Group and French state-controlled naval shipbuilder DCNS had initially expressed interest in acquiring STX France, which specialises in building cruise ships.

Italian shipbuilding and construction group Fincantieri SpA is the only bidder for shipping group STX France, a source close to the matter said on Tuesday. The sale of STX France, which specialises in building cruise ships in the western France city of Saint-Nazaire and is profitable, forms part of the broader sale of businesses from the collapsed STX shipbuilding group. A spokesman for a Korean court overseeing the process had said earlier on Tuesday that one bid had been received for the STX France business, without giving a name. A spokesman for the Seoul court overseeing STX Offshore's receivership had said in November that four parties had expressed interest in buying one or both of South Korea's STX Offshore & Shipbuilding Co Ltd and a controlling stake in STX France.

Four parties have expressed interest in buying one or both of South Korea's STX Offshore & Shipbuilding Co Ltd and a controlling stake in STX France SA, a spokesman for the Seoul court overseeing STX Offshore's receivership said on Friday. The Seoul Central District Court spokesman declined to comment on the names of the parties. The South Korean court in October decided to allow the two units of the collapsed STX shipbuilding group to be sold either separately or together. Initial bids were due on Friday for all of STX Offshore & Shipbuilding Co Ltd and a 66.7 percent stake in STX France SA that is held by STX Europe AS. The four parties that entered non-binding bids in the sale were France's DCNS Group…

Italian shipbuilding giant Fincantieri SpA and Dutch counterpart Damen Shipyards Group are in the running to buy STX France, which has been put on the block by Korean debt-ridden parent STX Offshore & Shipbuilding Co, reports WSJ. Meanwhile,  STX Offshore - once the Korea's number four shipbuilder - has submitted a proposal to a court on how to revive its business, according to a report in AFP. STX filed for the restructuring in May after struggling for years with mounting losses caused by mismanagement and a slump in global demand.

Italian Shipbuilding: Cruising on the Crest of a Wave 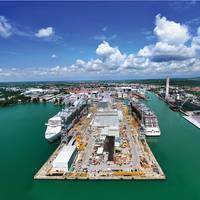 Traditionally, Italy’s location and coastal development have continued to ensure the country a flow of income from its role as a strategic European hub in what has come to be known as the new “maritime century.” The country boasts of having the largest ferry fleet, the twelfth most extensive merchant shipping fleet in the world (fourth in Europe), and the third biggest European fishing fleet, with the national maritime cluster generating 3% of GDP. But its growing cruise industry is being looked upon as the game changer to the gradual slump being witnessed in the other sectors. 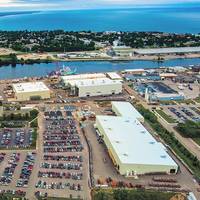 Big investments, lean manufacturing techniques borrowed from the automotive industry, and a more engaged workforce have revamped the Wisconsin shipyard where Italy's Fincantieri SpA builds the Freedom variant of the U.S. Navy's coastal warships for prime contractor Lockheed Martin Corp. Fincantieri invested $100 million in recent years to transform the 1940s era shipyard into a state-of-the-art facility, where seven LCS ships are now under construction, including three that have already been launched into the river.

With its coastline of 7,800 km, Italy is expediently nestled in the heart of the Mediterranean Sea with the surrounding waters creating a tremendous resource for Italian economy. Businesses linked to the sea, including ocean technology firms, contribute significantly to Italy’s gross domestic product totaling more than $40 billion and representing 2.6% of total GDP. The Italian shipyard industry ranks among the top 20 in the world with ship building and boat-building accounting for 64% of the industry turnover… 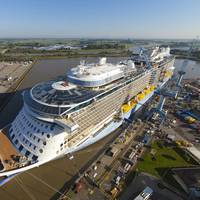 After an uneven couple of years punctuated by struggling economic factors worldwide, maturing markets and some highly publicized accidents and illnesses, the cruise industry is hoping to find a little “double happiness” from the rapidly growing Chinese market – enhanced profits and renewed market growth for both operators and builders. For its part, the Chinese government is betting on a triple payout:  it hopes to serve a growing middle class (estimated at a potential 300 million market) and its desire for cruising vacations…

Korea-based conglomorate STX saw tough times the past year due to severe cash shortage, but is seeking a turnaround in 2013 after offloading some assests. Market analysts have mixed views for STX. Some say that its bold move will help the conglomerate get back on track, while others counter that it will continue struggling to stay afloat due to the unfavorable business environment, reports 'The Korea Times'. The corporation has raised 1.12 trillion in cash by selling its stakes in European affiliate  STX OSV  to Italian shipbuilder Fincantieri SpA for 768 billion won and STX Energy to Japan’s Orix for 360 billion won. The group also plans to sell its stake in STX Pan Ocean, the nation's leading bulk carrier.

Fincantieri SpA, the Italian state-controlled shipbuilder, is among final bidders for a stake in STX OSV Holdings Ltd., the world’s largest maker of offshore support vessels, said two people with knowledge of the matter. An investment fund also made an offer, one person said, declining to identify the bidder. South Korea’s STX Group, which is seeking to sell its 51 percent stake in Singapore-listed STX OSV, may conclude a deal next month, the person said, asking not to be identified because the process is confidential. STX Group’s stake is worth $809 million based on yesterday’s closing price, according to data compiled by Bloomberg. Singapore’s takeover guidelines require any buyer of more than 30 percent of a publicly-traded company to make an offer for the rest of the stock.

According to www.euro2day.gr, reformed communist politician and parliament member Maurizio Zipponi has proposed to the Italian government a merger of Fincantieri SpA and Aker Yards ASA in a move aimed at blocking Korea's STX Shipbuilding, which recently bought a major stake in the Norwegian shipyard, Il Sole 24 Ore said, citing Zipponi. On Oct 23, STX said it bought a 39.2 pct stake mln in Aker Yards, becoming the company''s largest shareholder. Since then, Aker Yards management has sought ways to defend itself from the Korean company and hired Arctic Securities and JP Morgan to examine "strategic alternatives", including the possible entrance of other European companies into its share capital, Il.

It was reported that Italy's Defense Ministry placed a $757 million order for an aircraft carrier with Fincantieri SpA. The order for the 235-meter long vessel, the biggest warship built in Italy since the second world war, brings the order book at money-losing Fincantieri to 6 trillion lire. Construction will begin next June at La Spezia, in the region of Liguria, and the ship is likely to enter into service in 2007. The ship will reportedly be powered by four gas turbines built by Fiat SpA and General Electric Co. Separately, it was reported that Fincantieri Chief Executive Pier Francesco Guarguaglini said the company will invest 100 billion lire in the next two years to create a third shipbuilding yard in Genoa.

Italian state-held shipbuilder Fincantieri SpA, the world's largest maker of luxury cruise ships, said its net profit was EUR26.5 million in the first half, in line with the figure for the same period in 2006. New orders rose by a record of EUR2.7 billion, up 34% from a year ago, bringing its total order book to EUR10.6 billion. Gross operating profit rose 26.3% to EUR76.8 million in the first half, the company indicated. Fincantieri is planning an initial public offering in 2008, but the company's time table could slip after the Italian government said labor unions must approve Fincantieri's business plan. [Source: Dow Jones]

Fincantieri SpA will reportedly cut at least $334 million in costs - or between 15 and 20 percent of the total - over the next three years to return to profit. "By 2001, the company should be back in the black," Fincantieri Chief Executive Pier Francesco Guarguaglini told labor unions, according to press reports. The plan, while boosting production and efficiency, would not include layoffs. Fincantieri is expected to post a loss of more than $160 million this year and lose money next year as well. Guarguaglini was appointed chief executive in June.