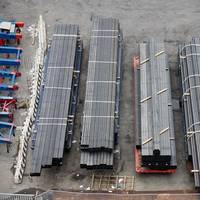 Morgan Stanley's top executive said on Wednesday that potential tariffs on steel and aluminum that U.S. "The biggest issues this country faces are not trade deficits, they're fiscal deficits," Chief Executive Officer James Gorman told CNBC. Gorman said that imposing tariffs on a country or ally that the United States sells a lot of goods to is not the "best way to move forward." He added that there may be retaliation from other countries due to the tariffs. "You can't be unilateral with these things," he added.

Overseas Shipholding Group Inc investors have reached $16.25 million in settlements with the executives, underwriters and an auditor of the tanker company in a lawsuit related to its 2012 bankruptcy and tax problems. Company directors and officers, including former Chief Executive Morten Arntzen and former Chief Financial Officer Myles Itkin, agreed to pay $10.5 million, papers filed in Manhattan federal court on Thursday showed. Underwriters including Citigroup Inc, Deutsche Bank AG and Goldman Sachs Group Inc will pay $4 million, while accounting firm PricewaterhouseCoopers LLP will pay $1.75 million. "We're think its an extraordinary result in an extremely complex case," David Rosenfeld, a lawyer for the plaintiffs, said on Friday.

CVR Energy Inc is bound by agreements to pay Goldman Sachs Group Inc and Deutsche Bank AG more than $36 million in fees and expenses stemming from billionaire investor Carl Icahn's 2012 tender offer for the oil refiner, a New York state judge has ruled. The banks had each sued CVR in 2012, claiming CVR had hired them to provide financial advice on Icahn's ultimately successful tender offer for its stock, and agreed to the fees based on the size of the transaction. In May 2012…

President Barack Obama announced steps on Friday to increase the use of solar panels, boost energy efficiency in federal buildings and train more people to work in the renewable energy field. "It's the right thing to do for the planet," Obama said, standing in the outdoor lighting display section of a WalMart store that features roof-top solar panels and a charging station for electric vehicles, among other energy-saving retrofits. The president used the stop to show how major corporations have committed to increasing the generation of solar power at their facilities.

Goldman Sachs Group Inc. is out as co-adviser of the sale of Daewoo Shipbuilding & Marine Engineering Co., according to a report on Bloomberg. According to the Bloomberg report, Korea Development Bank reversed its earlier decision to have Goldman be a preferred bidder as co-adviser of the sale of a 50.4 percent stake in Daewoo Shipbuilding, as the bank and Goldman apparently failed to reach an agreement on terms of the contract. (Source: Bloomberg)

its online B2B exchange has reached 6,000, consisting of approximately 5,000 shippers (exporters/importers) and approximately 1,000 service providers (carriers and intermediaries). GoCargo.com's team of 20 international traders are operating 24 hours a day, five days a week, offering local decision makers from Tennessee to Hong Kong the ability to bid on and book shipments online with the personal assistance of GoCargo.com account managers who speak numerous languages, such as Mandarin, Korean and German. The new exchange at Broadway and Wall Street is bringing 21st century trading concepts to the tradition-bound shipping industry, with real benefits to both the buyside and the sellside: saving as much as 40% on shipping contracts for the shippers…

According to a Bloomburg report published in The Royal Gazette, an Indonesia Supreme Court upheld a ruling that Frontline Ltd. colluded with officials at the state oil company and Goldman Sachs Group Inc. to buy two tankers for below-market prices in 2004. Pertamina hired Goldman in 2004 to help it sell the two tankers. Frontline, controlled by Norwegian billionaire John Fredriksen, bought the two ships for $184 million, according to the report. The Supreme Court upheld the agency’s allegation that the ships were worth $240 million.

Goldman Agrees to Buy AB Ports for $4.6b

Bloomberg reports that Goldman Sachs Group Inc. and its bidding partners agreed to buy Associated British Ports Holdings Plc., after raising their offer to $4.6b. Goldman is buying the port operator with the government of Singapore and a Canadian pension fund. The group's first bid was 730 pence a share in March. The sale of London-based Associated British Ports is the third takeover of a British harbor owner in the past six months as an increase in world trade and expectations of steady earnings attract investors. DP World, which is owned by the government of Dubai, United Arab Emirates, in March bought Peninsular & Oriental Steam Navigation Co. for $6.8 billion after agreeing to sell U.S. operations to overcome opposition from Congress.

In order to help negotiate its pending merger with Kawasaki Steel Corp., NKK Corp., has called upon Goldman Sachs Group Inc., while Kawasaki has reportedly hired Morgan Stanley Dean Witter to help with negotiations regarding the possible business transaction. Earlier this year, the same two advisers were hired by Mitsui Chemicals Inc. and Sumitomo Chemical Co. to help negotiate the union of those two businesses, which will form the world's fifth-biggest chemical company. A value for the steel and chemical mergers will be determined when the parties hammer out a ratio for their share swaps, likely to be later this year, the paper said. The transactions are likely to be two of the biggest deals this year. Together they are reportedly valued at as much as $30 billion including debt.