South Carolina (SC) Ports has celebrated the structural completion of the operations building at Hugh K. Leatherman Sr. Terminal, a new container terminal along the Cooper River, which will open in March 2021.S.C. Ports celebrated today the structural completion of the terminal’s new operations building. More than 300 people — contractors, port employees, elected leaders and community members — cheered as a steel beam and tree were placed atop the steel structure as part of a traditional “topping out” ceremony.The 34,853-square-foot building, built by Samet Corp., will have offices, meeting spaces, crane operator rest and training areas, and a full-service kitchen, as well as the backup power required to maintain critical infrastructure in the event of a power outage.Sen. Hugh K.

US President Donald Trump approved $138 million for the Charleston Harbor Deepening Project as part of the Energy and Water Appropriations Bill in the 2020 Budget.According to a statement from South Carolina Ports Authority, both the Senate and the House voted to approve the appropriations bill this week as part of the fiscal year 2020 funding package, and Trump signed it into law Friday."This enormous step forward means the project is fully funded to completion and on track to achieve a 52-foot depth in 2021," it said.S.C. Ports Authority Board Chairman Bill Stern said: “This huge infusion of federal funding reflects the importance of ensuring South Carolina has a deep harbor capable of handling mega container ships."S.C.

South Carolina Ports Authority (SC Ports) reported a stellar performance in the first four months of the fiscal year backed by strong volumes in both containerized and vehicular cargo.S.C. Ports moved 217,360 twenty-foot equivalent container units (TEUs) across the Wando Welchopens in a new window and North Charlestonopens in a new window container terminals in October. SCPA has moved 855,959 TEUs since July, a 7% increase year-over-year.As measured by the total number of boxes handled, SCPA moved 122,591 pier containers in October for a total of 484,549 pier containers in fiscal 2020, up nearly 7% from a year ago.S.C. Ports handled 20,986 vehicles at Columbus Street Terminalopens in a new window in October. 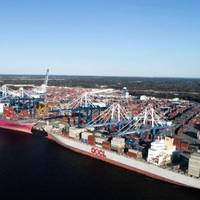 President Donald Trump included $138 million in his budget for the coming year to help deepen Charleston Harbor to 52 feet so it can handle larger container ships, said Charleston District of the U.S. Army Corps of Engineers.The project, in the works since 2011, had never been included in a president’s budget until now. The U.S. Army Corps last year revised a formula that measures the project’s economic benefit, putting it above the threshold needed for consideration.The Charleston Harbor Post 45 Deepening Project will make transportation more efficient within the harbor by allowing neo-Panamax ships to come into the port without restrictions.Inclusion…

South Carolina Ports Authority celebrated the dedication of a new headquarters building at the Wando Welch Terminal with its Board of Directors, local leaders, business partners and employees.The Ports Authority, which owns and operates public seaport facilities in Charleston and Georgetown, as well as Inland Ports in Greer, South Carolina and Dillon, South Carolina, said in a press note that the 80,000-square-foot building consolidates approximately 160 employees working from multiple office locations in the Charleston area.Accoding to the press release, the building design features a glass atrium in the lobby extending up all four floors and a terrazzo floor pattern depicting the Charleston Peninsula and waterways.

The South Carolina Ports Authority (SCPA), which operates the Port of Charleston and other facilities, today reported 6.4 percent year-over-year container volume growth, with a record 2.3 million twenty-foot equivalent container units (TEUs) handled in 2018.Last year marked the third consecutive calendar year of record TEU volume for SCPA. The Port moved 199,701 TEUs in December alone, a 9.2 percent increase over December 2017 and the strongest December in SCPA history.As measured by the total number of boxes handled, SCPA moved 114,018 pier containers in December and a record 1.3 million pier containers in 2018.“We are pleased to report our strongest December in history and record-breaking growth of our container business in calendar year 2018,” said SCPA president and CEO Jim Newsome.

Jim Newsome, president and CEO, highlights cooperation and collaboration.South Carolina Ports Authority (SCPA) president and CEO, Jim Newsome, presented the annual State of the Port to an audience of approximately 600 customers, elected officials and shipping industry representatives at the Charleston Area Convention Center. Jim’s presentation focused on the Port’s successes, strategic infrastructure investments to support continued container volume growth, new initiatives to increase Port productivity and overall industry trends that will impact the Port in the future. The Propeller Club of Charleston hosted the event which marked Newsome’s tenth address since joining SCPA in 2009.SC Ports volumes for the 2018 fiscal year, which ran July 2017 through June 2018, were record-breaking.

“The South Atlantic Chassis Pool was formed in 2006 as a way to more efficiently handle the provision of chassis for the movement of containers in the Southeast. Today, this pool provides about 40 percent of the chassis offered in CCM managed pools. While this pool has historically been an effective solution to chassis provision, the current fleet is both aging and has not kept up in size with the growth of containerized trade in the Southeast. Additionally, chassis provision is increasingly fragmented in the market as about 40 percent of the container moves are handled by chassis provided outside of the pool structure. The Georgia Ports… 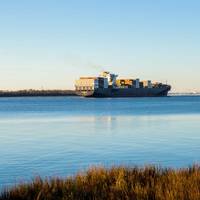 At a ceremony held earlier in March, officials celebrated the beginning of construction on the Charleston Harbor Deepening Project to 52 feet. "It is a monumental accomplishment to begin construction on the Charleston Deepening Project, which make Charleston the deepest port on the East Coast at a time when deep and wide shipping channels are necessary," said Jim Newsome, South Carolina Ports Authority president and CEO. "The container shipping industry today is dominated by big ships, and ports must adapt to handle them in order to remain competitive.

South Carolina Ports Authority’s 2018 fiscal year container volume through November grew 2.5 percent compared to last year, with 886,414 twenty-foot equivalent container units (TEUs) handled by the Port of Charleston since July. The Port moved 163,592 TEUs during the month of November, with a balanced mix of import and export cargo. As measured in pier container volume, or the total number of boxes handled, the Port moved 92,329 containers in November. Fiscal year to date, SCPA has handled 502,063 pier containers, an increase of 2.9 percent over the same period last year. Inland Port Greer handled 7,308 rail moves in November. With 49,482 rail moves handled to date in FY18, the facility’s growing volumes are 10.2 percent higher than last year.

South Carolina Ports Authority moved a record 2.14 million twenty-foot equivalent units in fiscal year 2017, an increase of 10 percent over the previous year’s container volumes. Highest-ever June volumes of 183,237 TEUs gave SCPA a strong finish to its fiscal year, which runs July through June. The Port’s previous record was 1.98 million TEUs, achieved in FY2006. “We had a very strong fiscal year, reflective of a capable and hard-working SCPA team and entire maritime community,” said SCPA president and CEO Jim Newsome. As measured in pier containers, or boxes handled, SCPA moved a record 104,010 containers across the docks of its two container terminals in June.

The Charleston Harbor Deepening Project was named one of six “new starts” and received $17.5 million in construction funding in the U.S. Army Corps of Engineers (USACE) Fiscal Year 17 Work Plan released today, allowing construction on the project to begin this fall as scheduled. Charleston also received $16.1 million in operations and maintenance dollars, which provide for the routine maintenance dredging of the harbor necessary for construction begin. Collectively the funds allocated in the Work Plan allow Charleston to continue moving forward and preparing for construction. “This is monumental news for the Charleston Harbor Deepening Project…

Biggest Ship to Ever Visit US East Coast

Wide, deep channels and big-ship infrastructure will earn South Carolina Ports Authority the desired position as last port of call when the biggest ship ever to call the US East Coast, the COSCO Development, arrives in May. "SCPA has worked aggressively for years to ensure we can efficiently work 13,000 twenty-foot equivalent unit (TEU) vessels and be the last Southeast port of call with no navigational issues," said Jim Newsome, SCPA president and CEO. "Our naturally wide and deepwater harbor, soon to be the deepest on the entire East Coast at 52 feet, can handle vessels the COSCO Development's size loaded heavy with cargo. Coupled with our landside capacity and infrastructure…

Cranes: much more than just critical equipment. At ZPMC, it means the supply chain itself. In post-Panamax world – that is to say one which includes an expanded, deepened and improved Panama Canal – there are many layers to the logistics onion. These include reinforced and improved berths and bollards, deepened blue water harbors, improved intermodal connections ashore and a reshuffling of ever larger tonnage for ports that can handle those ships. All of that is important, of course, but it is the post-Panamax sized cranes which may be the hottest commodity on the water as the race for the cargo reaches full speed. How those cranes are sourced and acquired may surprise you. It turns out that the global crane business is very much a ‘turnkey’ operation.

South Carolina Ports Authority (SCPA) announced a record container volume of nearly two million 20-foot equivalent units (TEUs) handled in 2016. SCPA handled 1.996 million TEUs in 2016, surpassing the previous record of 1.985 million TEUs handled in 2005. Container volume in TEU was up 1.2 percent compared to last year. Loaded TEU volume was up 4 percent year-over-year while empty container volume was down 10 percent. “This is a significant accomplishment for the SCPA of which we are very proud,” said Jim Newsome, SCPA president and CEO. “We are cautiously optimistic about the future given the significant automotive projects that exist in the Southeast along with the seeming recovery of emerging market economies, which drives U.S. exports. 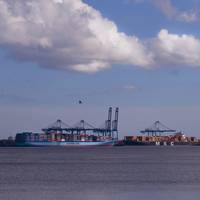 Today's passage of S.612, the Water Infrastructure Improvement for the Nation Act (WIIN), formerly known as Water Resources Development Act (WRDA), by the U.S. House of Representatives, moves the Charleston Harbor Deepening Project closer to securing the authorization necessary to begin construction. "We applaud the House for passing this legislation before the end of the year, which is critical to modernizing ports and port-related infrastructure across the country," said Jim Newsome, SCPA President and CEO. "The South Carolina Delegation worked extremely hard to move this bill forward. Thanks to their support, we are well-positioned to be the deepest harbor on the East Coast by the end of the decade. We remain hopeful that the U.S.