Japanese transport company Mitsui O.S.K. Lines (MOL) held a "MOL Safety Conference 2019" for seafarers of the MOL group from February to end of May at 5 locations worldwide, which almost 800 seafarers have attended.The locations were Tokyo (Japan), Mumbai (India), Manila (Philippines), Dubrovnik (Croatia) and  Vladivostok (Russia).MOL Chairman Koichi Muto and President & CEO Junichiro Ikeda along with many other MOL executives and staff members participated in the conference to discuss with seafarers about the safe operation.The Safety Conference has been held annually since 2007 with the main purpose of fostering a safety culture within the organization.

Mitsui O.S.K. Lines, Ltd. today announced that on March 8, it held a groundbreaking ceremony for a new merchant marine academy in Salitran, Dasmariñas City, the Philippines. It will be jointly established with Magsaysay Maritime Corporation (MMC) (*1), MOL’s partner in the Philippines, and is scheduled to open in June 2018. A large audience was on hand for the groundbreaking ceremony, including special guests from the city of Dasmariñas and from the Commission on Higher Education (CHED); from MOL, Chairman Koichi Muto and Senior Managing Executive Officer Masaaki Nemoto. Everyone in attendance prayed for the safe completion of the construction project.

MOL President, President, Koichi Muto reported that the performance of the company was slack. Muto reported, "I am sad to report that our business performance fell short, and we could not achieve our initial target of ¥70 billion in consolidated ordinary income. Looking back at FY2014, the containership business could not achieve our targets despite the favorable winds of a depreciating yen and lower bunker prices. This was due to factors including inaccurate projections regarding the trade environment, freight rate market, and bunker prices, as well as construction delays in our terminal automation project, and led to a significant loss. In addition, repeated downward revisions of our forecasts have eroded shareholders’ trust in our company.

Mitsui O.S.K. Lines, Ltd. today announced the appointment of a new chairman and president.   Current President and Representative Director Koichi Muto will assume the position of Representative Director and Chairman, and current Director and Senior Managing Executive Officer Junichiro Ikeda will become president. The appointments are subject to approval by the Board of Directors meeting following the Annual General Meeting of Shareholders, which will be held on June 23, 2015.

Mitsui O.S.K. Lines, Ltd. today announced the graduation of 105 students in the fourth class of the "3rd Year Program," which MOL introduced with the goal of developing crewmembers who will uphold strict safety standards in vessel operation. The 3rd Year Program targets new seafarers from among third-year students at partner maritime schools in the Philippines. MOL provides education and training at the Magsaysay Institute of Shipping(MIS)(*1), its training center in the Philippines. On hand for the graduation ceremony were Administrator of the Maritime Industry Authority (MARINA)Dr. Maximo Q. Mejia, Jr, Development Bank of the Philippines Executive Vice President and Chief Development OfficerBenel D.

Mitsui O.S.K. Lines, Ltd. (MOL; President: Koichi Muto) and Reliance entered into a strategic association for transportation of Liquefied Ethane from United States to India. This will make MOL to be the first shipping company who is dedicated for a continuous Liquefied Ethane transportation by Very Large Ethane Carriers (VLEC). The transportation of Ethane will be carried out by six VLEC's from North America to India. The VLEC's are being specifically built by Samsung Heavy Industries Co., Ltd and expected to be delivered in the last quarter of 2016 and will enter into service thereafter. The vessels are designed to cater to the latest safety and environmental regulations and will have superior design parameters.

Three Castaways Rescued Safely off Indonesia. Mitsui O.S.K. Lines, Ltd. (MOL; President: Koichi Muto) has announced that on October 6, 2014, the MOL-operated/managed LNG carrier Senshu Maru founded drifting castaways in the Celebes Sea off Indonesia, and was able to safely rescue three Indonesian fishermen. At 14:15 (all times were in Japan time) on October 6, 2014, the Senshu Maru, sailing from the port of Bontang, Indonesia, to the port of Sakai-Senboku in Osaka, Japan, found drifting fishermen – their fishing boat was hit by the wave and sunk, and immediately began the rescue operations.

Mitsui O.S.K. Lines, Ltd. (MOL; President: Koichi Muto) today announced the publication of the English version of its Environmental and Social Report 2014, which introduces the MOL Group's perspectives and latest initiatives regarding corporate social responsibility (CSR) and the environment. The report provides a broad range of information based on the viewpoints of the environment, society, and governance (ESG), which support MOL's sustainability, and focuses especially on issues the MOL Group should emphasize to ensure continued growth while meeting the needs of its various stakeholders. The special feature, "Contributing to Society through Businesses…

"I would like to report our business results for the first quarter of fiscal year (FY) 2014 (April 1, 2014 to June 30, 2014). During the first three months of FY2014, while geopolitical risks such as political strife in Ukraine and Iraq raised concerns of a spike in crude oil prices, moderate recoveries in the United States and Europe drove global economic growth. Looking at maritime shipping markets, a continuing surplus of dry bulk vessels kept that sector weak overall. The very large crude oil carrier (VLCC) market slumped mainly as a result of a decline in demand for crude oil shipments due to scheduled periodic maintenance at East Asian refineries. On the other hand, the LPG carrier market was strong. 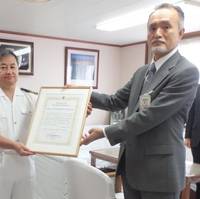 The president of Mitsui O.S.K. Combined with the continuing weaker yen and falling bunker prices, we saw a significant year-on-year improvement in profitability, and successfully achieved the main theme set forth in the Single-year Management Plan RISE2013 – Achieve profitability in FY2013 to make it the first year of MOL’s new growth stage. Looking at maritime shipping market conditions, despite signs of a year-on-year recovery, the environment remained difficult overall. In the dry bulker market, on the vessel supply front the number of new vessel deliveries showed a substantial year-on-year decline. On the cargo demand front, cargo volumes were brisk overall and shipment volumes of iron ore from Western Australia hit a record high. 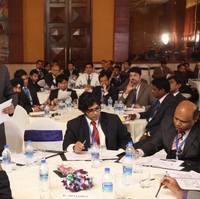 Four conferences aimed at becoming the world leader in safe operation. Mitsui O.S.K. Lines, Ltd. (MOL) announced that MOL Safety Conference 2014 programs have been held in four places worldwide. Date                          City (country)                No. Each conference opened with powerful messages from MOL Chairman Akimitsu Ashida and President Koichi Muto. “This year marks the 130th anniversary of MOL. For our growth strategy, establishing and maintaining safe operation is one of the most important issues for gaining customer’s trust. 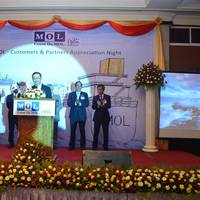 Mitsui O.S.K. Lines, Ltd. (MOL) president Koichi Muto hosted an appreciation cocktail party for government leaders, customers, partners and MOL employees on March 5 at Park Royal Hotel, Yangon. It was well attended by 110 guests including Ichiro Maruyama, Minister-Counsellor/Deputy Chief of Mission, Embassy of Japan, reaffirming MOL’s expansion plan in the containership business in Myanmar and its commitment in furthering the country’s economic development. "It is my honor to visit Myanmar and I am deeply grateful to the Myanmar government… 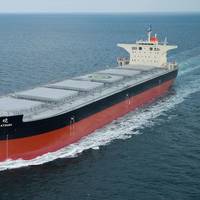 Mitsui O.S.K. Lines, Ltd. (MOL; President: Koichi Muto) has announced the delivery of the Akatsuki, the first 104,000 DWT class Post-Panamax coal carrier, which was jointly developed with Sanoyas Shipbuilding Corporation (President: Takashi Ueda; Headquarters: Kita-ku, Osaka) and built at the Sanoyas Shipbuilding Mizushima Shipyard. This new ship type was designed to optimize the transport of coal for power companies in Japan. MOL plans to add these advanced, efficient vessels to its fleet in succession. 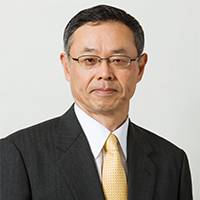 MOL Group president Koichi Muto issued a New Year message that reflects on 2013 while rallying for company-wide growth in 2014 as MOL prepares for 130th anniversary. “Looking back at 2013, Japan’s economy finally started to offer a glimpse of hope for pulling out of the deflation from which it has suffered for many years,” Muto said. “This can be attributed to the economic policies of Prime Minister Abe’s government, or the so-called “three arrows” of Abenomics. Last year, MOL… 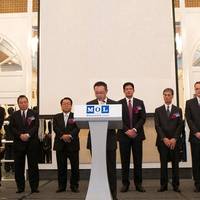 Attended by Some 350 Guests, Announces Commitment to Further Business Expansion. Mitsui O.S.K. Lines, Ltd. (MOL; President: Koichi Muto) hosted a party in Singapore on November 7 for customers, business partners, government officials and others. MOL emphasized the strategic importance of Singapore, and introduced group companies that operate businesses in the island nation. The event, held at the Intercontinental Hotel Singapore, was attended by more than 350 guests including Singapore Transport Minister Lui Tuck Yew and Japanese Ambassador to Singapore Haruhisa Takeuchi…

Mitsui O.S.K. Lines, Ltd. (MOL)’s president, Koichi Muto, announced plans to make a donation of $30,000 to aid afflicted people of Typhoon Haiyen, which devastated the central Philippines. The main portion of MOL’s donation will go to afflicted people on the island of Leyte, through its group company Magsaysay MOL Marine, Inc. The company is planning other relief efforts as the situation unfolds. MOL has built a deep relationship with the nation as many Filipino seafarers serve aboard MOL Group vessels, and established a maritime training center there. To assist afflicted people of Typhoon Fengshen in June 2008, which caused severe damage to the nation…

Mitsui O.S.K. Lines, Ltd. (MOL; President: Koichi Muto) reports that the containership MOL Comfort could not continue sailing under its own power because the hull fractured in two parts while under way on the Indian Ocean. At about 10:00 JST (05:00 local time) on June 19, 2013, two parts, fore and aft, laden with containers are drifting at about 2 knots near 12’57”N 61’10”E (the aft) (the central part of the Indian Ocean) in an east-northeast direction. We have arranged a patrol boat which has already departed from Port of Jebel Ali, U.A.E. to monitor the state of the vessel and the cargo and for the preparation of tow operations. The boat is expected to arrive at the ocean site on 23rd if it goes smoothly. In parallel, we are arranging tugboats to tow the MOL Comfort.

The Mitsui O.S.K. Lines' 2008-built Bahama-flagged 8,000 teu containership 'MOL Comfort' foundered Monday & all 26 crew were picked up from a lifeboat by 'MV Yantian Express'. According to GAC there is a considerable amount of oil in the water with containers scattered in the area 430 m southeast of Salahah, Oman. The weather at the time of the rescue was: Wind force 7, Swell 6 m. " The MOL-operated containership MOL Comfort, while under way from Singapore to Jeddah on the Indian Ocean (12'30"N 60'E) at about noon JST (07:00 local time) on June 17, 2013 during inclement weather, suffered a crack amidships and ingressing water in the hold. This made it impossible for the vessel to continue on under its own power. 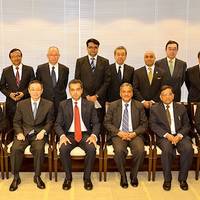 Indian Government delegation visits MOL Tokyo HQ - confirms MOL's intentions to strengthen operations in India. Mitsui O.S.K. Lines, Ltd. (MOL) were recently visited by a  nine-member delegation from the government of India, headed by Milind Murli Deora, who serves as Minister of State for Communications, Information Technology and Shipping. In a meeting with the delegation, MOL outlined its operations in India, beginning with the liquefied natural gas (LNG) carrier business, and how MOL shipping services can continue to contribute to the economic growth of India…