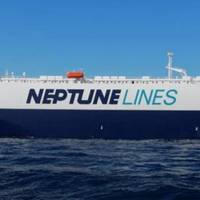 The shipping transportation solutions provider Neptune Lines is making an important investment in scrubbers with 10 units installed until Q1 2020.Denmark-based ME Production (MEP), a player in marine technologies solutions for marine equipment and energy markets, was selected to supply the units while the first two installations were successfully completed in Odessos shipyard in Varna and commissioned shortly after.By fitting these MEP systems, the ships will be compliant with the International Maritime Organization’s SOx regulations…

Swedish shipping company Swedish Orient Lines (SOL) announced  that it will add the port of Pietarsaari/Jakobstad (Finland) to its liner network with one weekly call using its vessels Thuleland and Tundraland.The service will offer direct port calls to Lübeck (Germany), Zeebrugge (Belgium) and Tilbury (UK). With its new route SOL supports BillerudKorsnäs export of paper products from its mill in Pietarsaari as well as other import and export cargo to the region.BillerudKorsnäs…

125 years ago, the steamship “Cremon” set sail from Europe to Canada for the first time under the Hapag flag. Hapag-Lloyd will be celebrating this anniversary in Montreal today with the shipping company’s customers and other partners. “As an important connection between Atlantic and Pacific, as well as between the United States, Asia and Europe, Canada has been and continues to be an important and special partner for us,” said Rolf Habben Jansen, the CEO of Hapag-Lloyd AG. At the end of the 19th century… 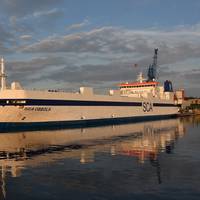 Kiel’s new forest products handling and distribution centre has gone into operation in the Ostuferhafen. This means that the port has now become an integral part of the logistics chain operated by the Swedish concerns Svenska Cellulosa Aktiebolaget (SCA) and Iggesund Paperboard. Dr Dirk Claus, Managing Director of the Port of Kiel (SEEHAFEN KIEL GmbH & Co. KG) said: “We have created a terminal in the Ostuferhafen which is tailor-made to the requirements of our customers. In addition to that, Kiel’s geographical location fits very well into the SCA liner network”. 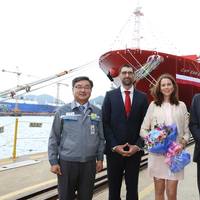 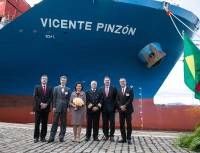 With the christening of the new container ship “Vicente Pinzón”, the Hamburg Süd subsidiary Alianҫa has -- for the moment -- completed the expansion and modernization of its fleet. In the past two years, Alianҫa has launched a total of six newbuildings for its cabotage services, four of which feature a slot capacity of 3,800 TEU each and two with 4,800 TEU each. All newbuildings have set new standards in the Brazilian coastal routes in terms of their capacity and environmental characteristic.

With the christening of the new container ship “Vicente Pinzón”, the Hamburg Süd subsidiary Alianҫa has momentarily completed the expansion and modernisation of its cabotage fleet. In the past two years, Alianҫa has launched a total of six newbuildings for its cabotage services, four of which feature a slot capacity of 3,800 TEU each and two with 4,800 TEU each. All newbuildings have set new standards in the Brazilian coastal routes in terms of their capacity and environmental friendliness. 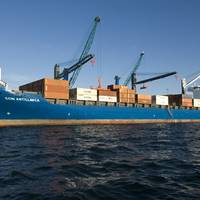 Compañía Chilena de Navegación Interoceánica S.A. (CCNI) with headquarters in Valparaiso, Chile, and Hamburg Südamerikanische Dampfschifffahrts-Gesellschaft KG (HSDG) with headquarters in Hamburg, Germany, announce that they have signed a preliminary agreement whereby HSDG will acquire the container liner activities of CCNI including the related general agency functions subject to due diligence, execution of a sale and purchase agreement and approval by the competent authorities. According to the involved parties, the acquisition is scheduled to be executed before December 31, 2014. 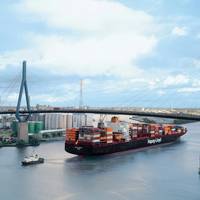 Hapag-Lloyd improved its result and transport volume in the previous financial year despite persistently tough competition. EBITDA increased year-on-year by €54.6 million to €389.1 million. The operating result also saw a significant improvement, climbing by €41 million to €67.2 million, meaning that Hapag-Lloyd performed well in comparison to its competitors. Thanks to its global liner network with almost 100 services, Hapag-Lloyd was able to take full advantage of growth opportunities in a difficult market. Transport volume rose by a total of 4.6% to approx.

Hamburg Süd 2012: Better, but Not yet Good Enough

Following the powerful recovery of the world economy in 2010 and a weaker 2011, global growth continued in the past financial year, albeit at a slower pace. Against this backdrop, container shipments increased once again, but at a weaker rate than vessel capacity. As a result, freight rates remained under pressure, especially on the Asia-Europe trade lanes, despite a significant but temporary recovery. Given still high fuel costs, the earnings level of almost all shipping companies remains unsatisfactory. The Hamburg Süd Group was unable to escape this development. At some 3.3 million TEU (1 TEU = 20-foot container), it transported around 4% more containers than in the previous year, roughly in line with market growth. Driven by a U.S.

The rate erosion for Far East services already apparent in 2008 has continued at the beginning of this year. In the meantime freight rates worldwide have reached a level that no longer covers costs. Hapag-Lloyd has therefore decided to raise rates in important trades in order to be able to continue to offer customers the accustomed reliable service and a comprehensive liner network. New tariff rates for incoming services from East Asia, based on Hong Kong to Mediterranean / Europe (westbound trade) will be $1,000 for a 20 ft, $2,000 for a 40 ft and $2,100 for a 40 ft high cube container with effect from April 1st 2009. At the same time new tariff rates for services from Europe to Asia will be implemented: $250 (20 ft) resp. $500 (40 ft).

Hamburg has one of the most comprehensive liner networks in Europe, which in turn means that it plays an important role as a transport hub for global cargo flows. Specialized liner traffic connects Hamburg to six continents. Over 100 container liner services travelling to destinations all over the world are based in Hamburg. One of the main markets for the Port of Hamburg are liner services from and to the Far East. In 2008 an average of 30 weekly full container services called at the Port of Hamburg. 19 new liner services were established in 2008. Eight of them sail on shipping routes to the Far East; three to India and the Middle East; two to South America and one each on routes in the regions North America, Australia / Oceania, Africa, the Mediterranean and the North and Baltic Seas.

"A plan of Rickmers four multipurpose heavy lift vessels on order from the SADRA Shipyard in Busheher. Rickmers-Linie, the Hamburg based global breakbulk, heavy lift and project specialist, has ordered four multipurpose heavy lift vessels from the SADRA Shipyard in Busheher. They are scheduled for delivery between July 2007 and July 2008. The newbuildings have been purpose-designed for the carriage of breakbulk, heavy lift and project cargo. With a deadweight of 24,000 tonnes, an overall length of 175m and a beam of 26.5m, they will be fitted with variable height tweendecks for maximum cargo flexibility. Indivisible heavy lift cargoes will be handled by two 350 tonne cranes that will have the facility to be twinned for handling loads of up to 700 tonnes.

Starting end of April, Hapag-Lloyd will operate their own independent service from Northern Europe via Suez direct to Australia/New Zealand that it used to provide with a partner. “We will be introducing two additional units and continuing to operate the service with twelve ships. With this direct service, we offer the best transit times on this route,” states Anthony Firmin, Managing Director Ship and Container Management of Hapag-Lloyd AG. Vessels with a capacity of 2,500 TEU, including 300 reefer plugs, are deployed for the weekly service provided on fixed weekdays. The transit time from Rotterdam to Melbourne is only 28 days. The following port sequence is planned: Tilbury…

Hapag-Lloyd has taken delivery of another mega containership with a capacity for 8,750 standard containers, the “Osaka Express”. The vessel was named in Hong Kong and will be deployed between Europe and Far East. “Over a third of containers carried in global transport is accounted for by China. All forecasts indicate continued stable growth. To be able always to provide adequate ship capacity for our customers in Asia, we have invested massively in recent years and will continue to do so in future,” emphasised Michael Behrendt, chairman of the executive board of Hapag-Lloyd AG, at the naming ceremony in Hong Kong. The naming was performed in Hong Kong by Catherine Desbois, wife of Gérard Desbois, CEO of JF Hillebrand Group AG.

The Hamburg-based shipping line Hapag-Lloyd is increasing its involvement with West Africa. It is establishing its own service linking Dakar and Tema in West Africa and Hamburg, Amsterdam and Southampton in Europe at the end of the year. Two vessels – becoming available from fleet cascading – each capable of carrying about 800 standard containers will be deployed, offering departures every 16 days. Each unit will have 100 reefer plugs. Transhipment possibilities will be offered from Dakar and Tema to all ports in West Africa. After its integration of CP Ships, Hapag-Lloyd belongs to the top 5 lines in global container shipping. Its comprehensive liner network with 90 services covers all major ports on all continents.