The Program Executive Officer for Unmanned and Small Combatants (PEO USC) granted Milestone C approval to the Knifefish Surface Mine Countermeasure Unmanned Undersea Vehicle Program. The decision clears the way for low-rate initial production (LRIP) of the system, PEO USC announced Aug. 23.The Navy is expected to award a LRIP contract to Knifefish prime contractor General Dynamics Mission Systems.The Knifefish system is designed for deployment from the littoral combat ship (LCS), vessels of opportunity or from shore to detect and classify buried, bottom and volume mines in high-clutter environments. Knifefish is a critical element of the LCS Mine Countermeasure Mission Package and will reduce risk to Navy personnel and equipment.The Knifefish system… 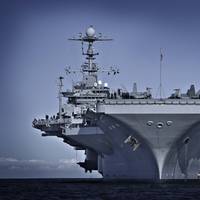 A pigment package designed by the U.S. Naval Research Laboratory (NRL) to slow discoloration of the exterior coating on surface ships has started to make its way into the fleet and is producing early, positive results.NRL researchers created the pigment combination to satisfy the fleet requirement for the Navy standard "haze gray" paint that will remain color stable for longer than current coatings. While many paint manufacturers had produced new coating technologies that solved a variety of other problems… 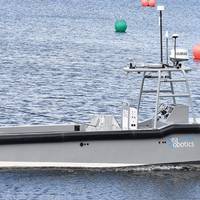 Florida-based SeaRobotics Corporation, which specializes in small, smart vessels that are remotely or autonomously operated, has completed its factory acceptance testing of its new entry into the autonomous surface vehicle (ASV) workboat market — the SR-Endurance 7.0 meter (22.96′) system.According to a press release from the the innovator behind the HullBUG, a groundbreaking hull cleaning ROV, and the HYCAT, the system is optimized for sonar research through the utilization of… 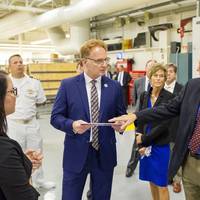 SSPC (The Society for Protective Coatings) named Mark Schultz, Government Marine Project Development Manager for Sherwin-Williams Protective & Marine Coatings, winner of the 2018-2019 John D. Keane Award of Merit. The award recognizes Schultz’s 25 years of significant contributions to the development of the protective coatings industry and to SSPC.Schultz was recognized with the award February 11, 2019, at the SSPC Coatings+ Conference in Orlando, Florida.Schultz, an SSPC Protective… 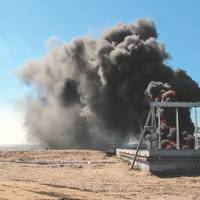 Coast Guard R&D Center’s JMTF is a big part of the nation’s environmental research efforts. In 1972, the U.S. Coast Guard Research and Development Center (RDC) established the Fire and Safety Test Detachment (FSTD), which later became the Joint Maritime Test Facility (JMTF), at Coast Guard Sector Mobile in Mobile, Alabama. As part of the unit’s establishment, test facilities were also built on nearby Little Sand Island in Mobile Bay. Since its inception, multiple retired commercial vessels were used as test platforms ending with the State of Maine, which was removed in 2010.

IOMAXIS, provider of technologies and mission-focused solutions for the intelligence, defense and civilian government markets, said it has been awarded a seat on an indefinite-delivery, indefinite-quantity contract valued at up to $245 million to give technological support and assistance to the U.S. Naval Research Laboratory. Through opportunities under this contract, IOMAXIS will provide research, development and technical support to strengthen the NRL’s initiatives in defense, intelligence and security technologies. “We are honored to have this opportunity to work with the Naval Research Laboratory,” said Dennis Kelly, CEO of IOMAXIS. 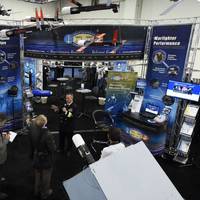 The Electrolytic Cation Exchange Module (E-CEM), developed at the U.S. Naval Research Laboratory (NRL), provides the Navy the capability to produce raw materials necessary to develop synthetic fuel stock at sea or in remote locations. The NRL, Material Science and Technology Division, has been granted the first U.S. patent for a method to simultaneously extract carbon dioxide and hydrogen from seawater. This single process provides all the raw materials necessary for the production of synthetic liquid hydrocarbon fuels.

This Day In Naval History: June 1 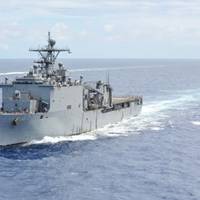 1813 - HMS Shannon, commanded by Capt. Philip Broke, captures USS Chesapeake, commanded by Capt. James Lawrence off the coast of Boston, Mass. During the battle, Capt. Lawrence is mortally wounded, but as he is carried below deck, he orders the iconic phrase: "Tell the men to fire faster! 1871 - Two ships under the squadron command of Commodore John Rodgers, on USS Colorado, are attacked from Korean forts and batteries. The squadron is carrying Frederick Low, U.S. foreign minister to China, who was sent to negotiate trade with Korea. 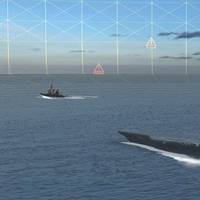 The U.S. Office of Naval Research has awarded BAE Systems an $11 million contract to develop next-generation electronic warfare (EW) technology that will quickly detect, locate, and identify emitters of radio frequency signals. Known as the Full-Spectrum Staring Receiver (FSSR), this technology will enable near-instantaneous battlespace situational awareness, emitter identification and tracking, threat warning and countermeasure and weapon cueing. Conventional situational awareness systems are not able to deliver the high level of coverage and responsiveness that FSSR will provide. 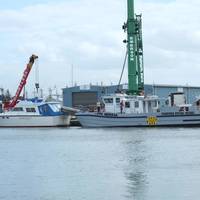 A Blyth Workcat patrol boat nearing completion for the Kent and Essex Inshore Fisheries Conservation Area (KEIFCA) has become the first vessel in the UK to be treated with Duplex fouling release. The silicone coating is manufactured by Fuji Smart Surfaces and was chosen by KEIFCA for its new 17-metre boat, the FPV Nerissa, because it is able to prevent the adhesion of fouling without the use of toxins that would be harmful to the fisheries. It also provides the benefit of a long…

The US Navy is developing a duck-like drone, the Flimmer (Flying Swimmer), that can both fly and swim. The drone, it says, can reach operational areas more quickly by flying over the surface of the water. In addition to both a rear-facing propeller and wings, its latest incarnation has four fins that adapt to what the robotic craft is doing. In flight, they serve as stabilizers and canard wings; in the sea, they flap to give the machine a speed boost. After successfully examining the performance of a “Test Sub” that combined a traditional submarine shape with a traditional aircraft shape… 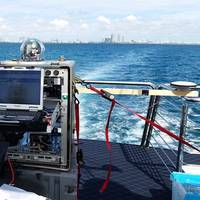 Scientists at the U.S. Naval Research Laboratory (NRL) along with Mercury Continuity (MC) have demonstrated the Tactical Reachback Extended Communications (TREC) system in the port of Miami. The NRL-developed communications technology, which provides a very high data rate transmission over long ranges, was tested as part of a Cooperative Research and Development Agreement (CRADA) with MC and Intelligent Designs, LLC. The full-duplex connection was set up between a node on top of a 760-foot-tall building near the harbor and another on board the vessel Norwegian Sky…

Interactive software that can dramatically cut the time it takes to plan safe submarine missions is crossing over to the surface fleet and is being installed this month on the guided-missile cruiser USS Mobile Bay (CG 53), officials announced Dec. 16. Sponsored by the Office of Naval Research (ONR), the technology adds speed and precision the process of finding the best routes around hazards in waterways around the world. Sailors spend days or even weeks planning a successful navigation route for a mission. 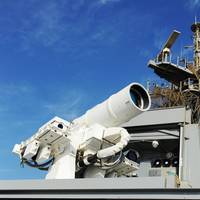 Officials at the Office of Naval Research (ONR) announced the laser weapon system (LaWS) - a cutting-edge weapon that brings new capabilities to America's Sailors and Marines - was for the first time deployed and operated aboard a naval vessel in the Arabian Gulf. The operational demonstrations, which took place from September to November aboard USS Ponce (AFSB[I] 15), were historic not only because they showed a laser weapon working aboard a deployed U.S. Navy ship, but also because LaWS operated seamlessly with existing ship defense systems. 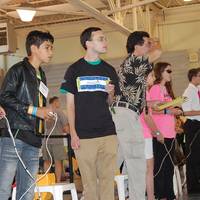 The University of Southern Mississippi in Hattiesburg, MS, and the Mississippi Regional SeaPerch Committee in mid-May hosted the Fourth National SeaPerch Challenge on the campus of Southern Miss. It was here that 108 teams of 451 middle and high school students – students from 19 states, the Commonwealth of Puerto Rico, and for a first time ever, and international team from New Zealand – convened at the University’s Payne Center and Johnson Natatorium for a weekend of competition and fun. As the climate warms and sea ice retreats, the North is changing. An ice-covered expanse now has a season of increasingly open water which is predicted to extend across the whole Arctic Ocean before the middle of this century. Storms thus have the potential to create Arctic swell – huge waves that could add a new and unpredictable element to the region. A University of Washington researcher made the first study of waves in the middle of the Arctic Ocean, and detected house-sized waves during a September 2012 storm. The results were recently published in Geophysical Research Letters. 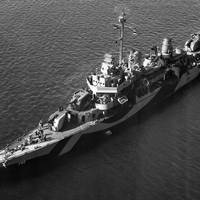 Today in U.S. 1916 - Navy establishes a Code and Signal Section which initially worked against German ciphers and tested the security of communications during U.S. naval training maneuvers. 1945 - USS Callaghan (DD-792) is last ship sunk by a Japanese kamikaze attack, off Okinawa. 1973 - Launch of Skylab 3, the second manned mission to the first U.S. manned space station, was piloted by Major Jack R. Lousma, USMC with Capt. Alan L. Bean, USN as the Commander of the mission and former Navy electronics officer, Owen K. Garriott as Science Pilot. 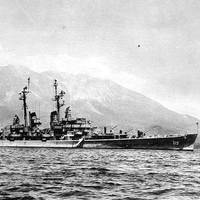 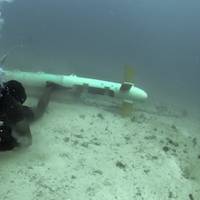 Dr. Jason Jolliff is an oceanographer with the U.S. Naval Research Laboratory (NRL). "The emphasis here," he says, "is on developing models of the ocean environment to help the naval warfighter." His most recent paper, published in Ocean Modeling (March 2014), shows NRL can also forecast where oil will go following a major spill. "If you're going to do forecasting," he says, "you have to get the ocean circulation correct. It's fundamental to all else." Jolliff plugged the distribution… 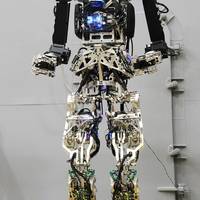 The Midas Touch: US Navy Researchers Convert Seawater into Fuel 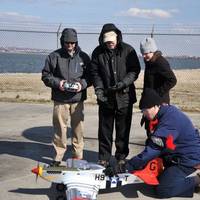 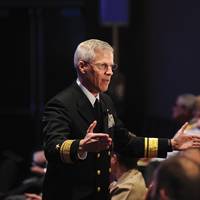 An interview with Rear Adm. Matt Klunder, U.S. What are your near term, mid-term and long term science and technology (S&T) objectives? It’s critical that our Sailors and Marines never go into a conflict as a fair fight. Whether it’s a near-term threat we’re trying to address, or a long-term leap-ahead technology, we need to make sure that we’re investing in cutting edge technologies that are going to give our Sailors or Marines that decisive technological advantage. Across everything we do…