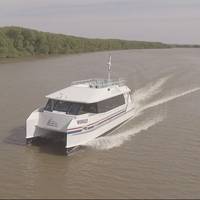 In September 2018,  a 17 x 5 meter catamaran completed its final tests in the Tigre Delta of theTigre on the Parana River near Buenos Aires, Argentina prior to its delivery to her Chilean owners.The cat was designed by Eng. Emilio Noel and built by Astilleros Unidelta SA. which has a well-established reputation in a wide range of steel and aluminum workboats. The yard has a plant located in Buenos Aires with 10,000 cubic meters of open and 4,000 cu.m. of covered work space. The…

A cargo ship collided with a dock on the Parana River in Argentina's grains hub of Rosario on Wednesday, causing a slowdown of activity at terminal 6 in the port of General San Martín and raising soymeal prices."The southern pier of terminal 6 is operational, with difficulties on the barge docks due to the blockage caused by the ship that generated the accident," said Guillermo Wade, manager of Argentina's Chamber of Port and Maritime Activity."The north dock of terminal 6 suffered some serious damage. One operator working in the area suffered a minor blow, but nothing serious," Wade said.Argentina is the world's top exporter of soymeal livestock feed and the third biggest supplier of raw soybeans.The ship… 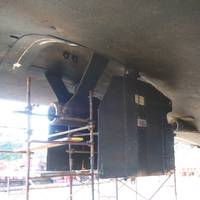 South American river tugboats need robust rudder bushings: some 20 tug boats on the Parana River, running through Brazil, Paraguay and Argentina, have been equipped with Vesconite rudder bushings. In the challenging waters of South American rivers, tugboat owners began ordering Vesconite’s proprietary thermoplastic rudder bushings starting in 2014. Convinced that the material – which is wear resistant, self-lubricating, environmentally-friendly, requires no grease, and easy to machine and fit – was more suitable than the bronze that has traditionally been used in the application… 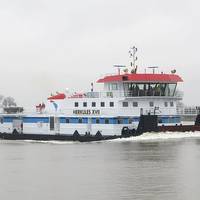 Imperial Shipping has chosen Van der Velden Marine Systems retractable flanking rudder systems for its push boats. The retractable flanking rudder system is an in-house innovation of Van der Velden Marine Systems (VDVMS). The system brings new efficiency to the inland shipping industry and will first be used in Paraguay. At the request of Dutch shipbuilder Damen, VDVMS developed the system and had it tested independently by the Development Centre for Ship Technology and Transport Systems (DST) in Duisburg (DE). Flanking rudders are often used for inland river tow boats.

Argentina has awarded a tender to buy 15 liquefied natural gas (LNG) cargoes for delivery April through May, picking suppliers which include Trafigura, Statoil, BP and Gazprom , according to trade sources. Of the 15 cargoes sought for delivery, eight are destined for the Escobar terminal on the Parana River, while the other seven are going to Bahia Blanca, according to the tender details. The identities of the remaining suppliers could not be immediately confirmed.   Reporting by Oleg Vukmanovic and Sarah McFarlane 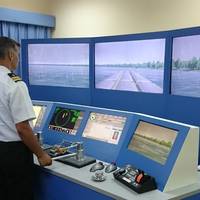 The Transas navigational simulator Navi-Trainer Professional 5000 was installed at the Center for Maritime and River Shipowners (CAFyM) in Asuncion for training crews in tugs operations in the Parana-Paraguay Waterway. The project was carried out in conjunction with VTG S.R.L., the Transas' local representative, which is covering commercial and technical needs of the Paraguayan market for all Transas products. The NTPRO version 5.35 installed at the CAFyM center is an excellent training solution due to its new capabilities for operation with different types of boats and barges in river waters.

The navigation channel at km 287 of the Parana River is obstructed after a bulk vessel went aground on the right margin during the early hours of 13 May during her navigation to San Nicolas. The Coast Guard has allowed navigation for vessels with max draft of 7.40m only through the secondary channel. (For information about operations in Argentina, and elsewhere in the Americas, contact the GAC Houston Hub Agency Center at hub.us@gac.com) Source: AMI Argentina - GAC agent

Argentina's grains hub of Rosario was paralyzed on Thursday by the second day of pay strikes by unions representing stevedores and other workers needed to dock and load recently-harvested soy and corn, union and management spokesmen said. The work stoppages threaten to slow supply from grains powerhouse Argentina, putting upward pressure on world food prices. The country is the world's top exporter of soymeal livestock feed and its No. 3 supplier of raw soybeans. "All docking and loading services are shut down at every one of the 25 ports from the city of Rosario going north along the Parana River to Timbues," Edgardo Quiroga, spokesman for the CGT umbrella labor organization told Reuters.

Argentina's main grains port of Rosario was paralyzed at midday on Wednesday by an open-ended wage strike by boat captains needed to help dock incoming cargo ships, the country's port management chamber said. At a busy time of the year for exporters, smack in the middle of Southern Hemisphere soy and corn harvest season, the country's dock workers also threatened a work stoppage if their own pay demands are not met. The strikes threaten to slow supply from grains powerhouse Argentina, putting upward pressure on world food prices. The country is the world's top exporter of soymeal livestock feed, its No. 3 supplier of raw soybeans and a major producer of corn and wheat.

Port workers in part of the Argentine grains hub of Rosario lifted a work stoppage on Friday, only a day after they went on strike over demands for higher year-end bonuses, a union official said. The strike briefly halted activity at the ports of Timbues, San Martin and San Lorenzo, all part of the Rosario shipping complex along the Parana River. "We just signed a deal with the export companies, which has allowed us to end the work stoppage," Edgardo Quiroga, spokesman for the CGT labor organization told Reuters. Argentina is the world's No. 3 soybean exporter and top supplier of soymeal livestock feed. It is also a major producer of wheat, shipped mostly to neighboring Brazil, and corn.

Navigation in the Parana River was temporarily interrupted due to an fuel spill after a collision between two vessels at km 285 (near Sab Pedro) on Saturday, 13 December. One of the vessels suffered damage on its fuel tank causing fuel spill, prompting the local authority to suspend upstream/downstream navigation. Navigation was restored in the early morning of Sunday 14 December. The damaged vessel received tugboat assistance and oil spill barriers were installed. Technical inspections of both vessels involved in the collision are being conducted.

Collision Halts Navigation on the Parana A new pushboat used to push barges convoys along the Paraguay River will be powered by a Wärtsilä integrated propulsion solution. The vessel is being built at the "Astillero la Barca del Pescador" (Shipyard SA) yard in Paraguay on behalf of Naviera Yeruti, a Paraguayan company with extensive barge construction and vessel operating interests. This vessel will be the company's first pushboat and it is scheduled to be delivered in the second quarter of 2015. The contract with Shipyard SA was signed in December 2013 and Wärtsilä's equipment will be delivered in the third quarter of 2014.

Inchcape Shipping Services (ISS), is advising of a potential general strike in Argentina all day Thursday, April 10, 2014. The Union backed strike will see stoppages in various ports by truck, bus and train drivers, pilot boat masters, linesmen, tug boat operators and stevedores. The strike is expected to affect all shipping operations in the port of San Lorenzo-Rosario. Particularly affected will be transits at Zona comun and pilot boat operations through Rio de la Plata, and the Parana River. 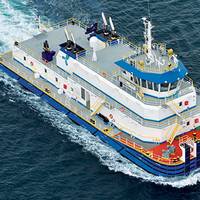 The first two in a series of 8 in total Robert Allan design SDP 4600 Class push boats have been named at a ceremony in the UZMAR, Turkey shipyard. The shipbuilders say that these are the world’s most powerful diesel electric triple Z-drive shallow draft push boats ever built, able to transport a 16 barge flotilla of 48.000 dwt capacity over a 2500 km range. These push boats were ordered by Hidrovias do Brasil S.A. from the shipyard  in 2013, and the first two of the series named respectively HB HYDRA ASUNCION-PY and HB AQUIARIUS ASUNCION-PY have now been delivered after successful sea trials. 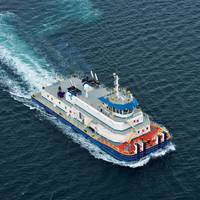 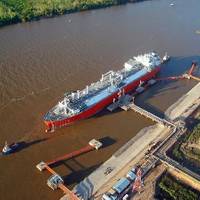 A barge transporting a large quantity of petroleum moves slowly down the middle of the Parana River in South America. Though it is early evening, the pilot is enclosed in torrid heat, fetid smells from the jungle's rotting vegetation, rampant palms that reach toward him on each side of the river, and the strange, floating beauty of blue and purple hyacinths, now swaying in his wake. The insect cries are deafening, louder than a New York subway. He does not pause to swat a mosquito, for there are none. Too small for this world, they have themselves been devoured by the far more populous insects half a foot long. Floating beside the barge are frogs larger than a small dog, the easy prey of jacares, another bloated amphibian that can outgrow a crocodile.