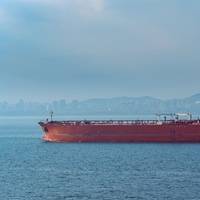 China's crude oil imports rebounded in April from a month earlier on daily basis as refiners ramped up output amid a recovery in fuel demand with the impact of the coronavirus outbreak easing while crude prices crashed on slumping consumption elsewhere.Crude oil arrivals were 40.43 million tonnes last month according to a full data table released by the General Administration of Customs on Thursday, equivalent to 9.84 million barrels per day (bpd).That was more than the 9.68 million bpd imported in March… 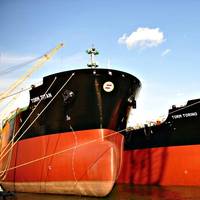 Denmark-based product tanker company TORM has obtained a commitment for a total of USD 496 million from a syndicate of lenders to refinance its debt and bolster its capital structure.The carrier of refined oil products said the total amount is a combination of two separate term facilities and a revolving credit facility, which will be used to refinance the company’s debt covering a total of USD 502 million.Following the refinancing, TORM does not have any major debt maturities until 2026 which supports TORM’s strong capital structure…

TORM, a Denmark-based shipping company that owns and operates product tankers, announced that it took delivery of two medium range (MR) newbuildings during the second quarter of 2019.The carrier of refined oil products said in a stock exchange announcement that it during the second quarter of 2019, TORM has purchased four modern 2011-built MR vessels for a total consideration of USD 83m. The vessels are expected to be delivered during August 2019.TORM has sold the MR vessel TORM…

Danish shipping operator TORM has reached an agreement to acquire four modern 2011-built MR vessels “at an attractive price point”."Looking into an improving demand-supply situation for the transportation of clean petroleum products, we believe that the timing for a fleet expansion with modern vessels is appropriate and underlines the flexibility provided by our strong capital structure," says Executive Director Jacob Meldgaard.A press release from the carrier of refined oil products…

Oil and oil-related shipments from Georgia's Black Sea port of Batumi dropped 24 percent in the first four months of 2019 from a year earlier, an official at a KazMunaiGas-operated terminal at the port said on Wednesday.Shipments of crude oil and refined oil products from Batumi have fallen in recent years, partly because Azerbaijan prefers to send its oil through the Baku-Tbilisi-Ceyhan pipeline or via its own terminal at the Georgian port of Kulevi, rather than from Batumi, which is operated by a Kazakh company.There were no shipments of crude oil, naphtha, jet fuel or vacuum gasoil from Batumi in January-April, the official, who did not want to be identified… 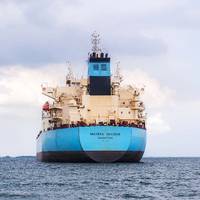 Maersk Product Tankers A/S said that the product tanker market, which was challenging in 2018  is expected to improve from the end of 2019.The company that transports refined oil products through its product tankers vessel fleet said in a press release that while fleet growth had slowed significantly over the previous two years, the market remained heavily oversupplied.Product trade demand growth was positive, but below historical ranges. As a result, product tanker freight rates fell. 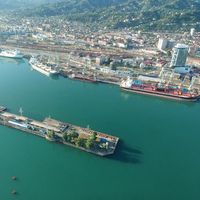 Oil and oil-related shipments from Georgia's Black Sea port of Batumi fell 51.2 percent in 2018 from a year earlier, an official at a KazMunaiGas-operated terminal at the port said on Thursday.Some crude oil was re-routed to the Baku-Tbilisi-Ceyhan pipeline and to the Caspian Pipeline Consortium last year, the official added, while some fuel oil was sent to the port of Taman in Russia and Georgia's other Black Sea port of Kulevi.The fall in shipments is partly because Azerbaijan prefers to send its oil through the Baku-Tbilisi-Ceyhan pipeline or via its own terminal in Kulevi, rather than from

Danish shipping company TORM has established a joint venture with scrubber manufacturer ME Production and Guangzhou Shipyard International (GSI).The joint venture, ME Production China, will manufacture and install scrubbers in China and deliver them to a range of maritime industry customers for both newbuildings and retrofitted vessels, said a press release from the carriers of refined oil products. TORM holds an ownership stake of 27.5% in the new joint venture. GSI is part of… 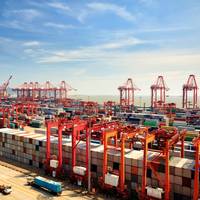 China's exports surged more than expected in July despite U.S. duties and its closely watched surplus with the United States remained near record highs, as the world's two major economic powers ramp up a bitter dispute that some fear could derail global growth.In the latest move by President Donald Trump to put pressure on Beijing to negotiate trade concessions, Washington is set to begin collecting 25 percent tariffs on another $16 billion in Chinese goods on Aug. 23.In a statement on its official website late on Wednesday, China's commerce ministry criticised the U.S. 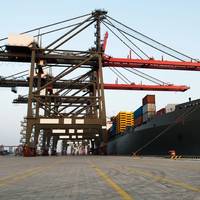 China will impose additional 25 percent tariffs on 659 U.S. goods worth $50 billion in response to the U.S. announcement that it will levy tariffs on Chinese imports, the Chinese commerce ministry said.Tariffs on $34 billion of U.S. goods including agricultural products such as soybeans will take effect from July 6, the ministry said. Soybeans are China's biggest import from the United States by value.The tariffs will also be applied to autos and aquatic products, the ministry said.The list of 659 U.S. 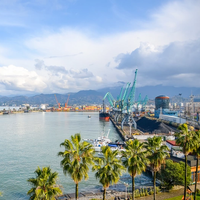 Oil and oil-related shipments from Georgia's Black Sea port of Batumi fell 53.7 percent between January and March from a year earlier, an official at the KazMunaiGas-operated terminal said on Wednesday. The official said some volumes of crude oil had been rerouted to the Baku-Tbilisi-Ceyhan pipeline and to the Caspian Pipeline Consortium this year, while some fuel oil had been sent to the port of Taman in Russia and Georgia's other Black Sea port of Kulevi. About ten Batumi terminal… 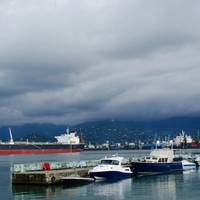 Oil and related shipments from Georgia's Black Sea port of Batumi in January were down 34 percent from a year earlier, an official at the terminal, operated by Kazakh KazMunaiGas , said on Thursday. The official gave no reason for the fall, but state company KazMunaiGas continued to reroute some shipments to the Baku-Tbilisi-Ceyhan pipeline this year. January shipments of crude oil and refined oil products from Batumi totalled 108,464 million tonnes, down from 164,218 tonnes a year earlier and 221,210 tonnes in December, said the official, who asked not to be identified. 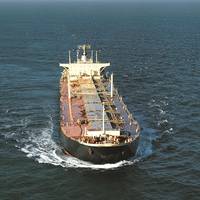 Lower product shipments from India, Mideast; diesel comes off floating storage, frees up ships. Dozens of tankers used to carry refined oil products are sitting idle in Asia and the Middle East as slow trade and an oversupply of ships have cut daily earnings to as little as a fifth of last year's level, shipbrokers and traders said. Shipping data in Thomson Reuters Eikon shows around 50 product tankers currently floating idle off Singapore and Fujairah, United Arab Emirates. Besides…

Singapore fuel oil trading volumes have soared after the 380-cst front-month time spreads widened by around $1 per tonne from the previous day's close, in what could develop into an aggressive trade strategy that occasionally rattles this market. The 380-cst March/April time spreads on the Intercontinental Exchange (ICE) saw about 700,000 tonnes in contracts trade after physical trading in the S&P Global Platts Market-on-Close (MOC) price assessments concluded at 0830 GMT on Tuesday. The flurry took the spreads to about $1.70 a tonne in post-European trade by 0400 GMT on Wednesday, from around plus 70 cents a tonne previously. Traders…

Cuban exports of refined oil products fell about 97 percent between 2013 and 2016, according to a United Nations trade report released this week, reflecting falling supplies from its political ally Venezuela. The UN Comtrade annual report put the value of Cuban fuel exports last year at $15.4 million, compared to more than $500 million in 2013. The amounts for 2015 and 2014, when oil prices collapses, were $163.5 million and $336.8, respectively. The figures were based on import data from reporting countries, which may make them incomplete. The communist-ruled Caribbean nation does not publish oil-related export information. Cash-strapped Cuba reported its exports of goods…

Cuba's chronic goods trade deficit widened by $1.5 billion in 2015 as exports fell 24 percent and imports rose 3 percent, the government said on Wednesday, in the first data showing a commodity crash has hurt the economy. The information, released on the National Statistics Office web page did not cover Cuba's large service exports. Prices for key Cuban exports such as sugar, nickel and refined oil products all tumbled last year. The Communist-run country began cutting back on its 2016 import orders last year and has been slow in making some payments to creditors and suppliers. Cuba orders much of its imports a year in advance. Cuban…

Maritime Piracy: More "sophisticated and prevalent” around Gulf of Guinea 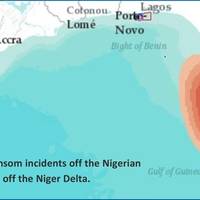 While the matter of maritime piracy has seemingly subdued from its high profile peaks of a few years ago, Stuart Edmonston, Head of Loss Prevention at UK P&I Club, together with Hellenic War Risks and Terra Firma Risk Management, highlight the growth of piracy in the Gulf of Guinea and considers the reasons behind the rise in kidnaps for ransom. “The Gulf of Guinea is understood to be the most dangerous region in the world for seafarers. A report by Oceans Beyond Piracy* revealed that there have been 32 kidnaps for ransom during 2016 in the Gulf of Guinea…

NEW YORK, July 5 (Reuters) - Oil prices tumbled nearly 5 percent on Tuesday as investors worried that Britain's exit from the European Union would slow the global economy, making it unlikely energy demand will grow enough to absorb a supply glut. Brexit worries hit Britain's property market and drove the pound to a 31-year low. A flurry of data from China in coming weeks is likely to show weaker trade and investments. Traders also cited data from market intelligence firm Genscape showing a build of 230,025 barrels at the Cushing, Oklahoma storage hub for U.S. crude futures, during the week to July 1. "There are risk-off trades across the board," said David Thompson, executive vice-president at Washington-based commodities broker Powerhouse. 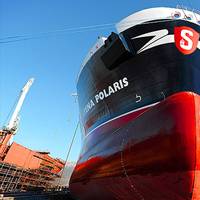 Facing a “gradually deteriorating market,” Sweden based tanker shipping company Concordia Maritime said it was able to post a profit in Q2 2016 based on high vessel employment and successful chartering, though still coming in under its Q2 2015 results largely due to an arbitration settlement and lower daily income for its vessels. The company reported a profit before tax of SEK 12.4 (44) million for the second quarter 2016, with operating cash flow (EBITDA) of SEK 57.2 (105.2) million, corresponding to USD 7 (13.1) million.

Lower growth rates for refinery throughput and drawdowns on swollen oil stocks has impacted the seaborne tanker market negatively. BIMCO expected this to happen. BIMCO has reduced its forecast for crude oil tanker demolition in 2016: from 5 million DWT to 3 million DWT. By mid-August, only 0.76 million DWT of crude oil tanker capacity proved to be in such poor condition that it could no longer be traded in the strong freight market. Limited fleet growth is key to keeping freight rates at a profitable level.