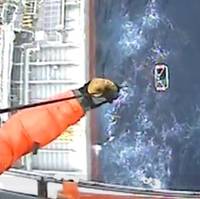 A burn victim was medevaced from a Liberian-flagged chemical tanker approximately 179 miles east of Charleston, S.C., on Sunday.The U.S. Coast Guard said its watchstanders at Sector Charleston were notified on Saturday around 7:46 p.m. that a crew member aboard the Southern Shark obtained chemical burns during a tank cleaning. A Coast Guard Air Station Savannah MH-65 Dolphin helicopter aircrew was launched to medecac the ailing 45-year-old mariner, who was airlifted and transferred to Augusta Burn Center Hospital by 3:03 p.m.

Search Called Off for Overboard Mariner in the Port of Savannah 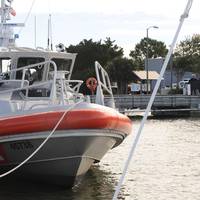 The U.S. Coast Guard said it has suspended its search Tuesday evening for a containership crewmember who went missing after he fell while transiting the gangway to the motor vessel Maersk Tukang in the Port of Savannah.Watchstanders at Coast Guard Sector Charleston received the initial notification from the Georgia Port Authority at approximately 3 a.m., Tuesday, stating a man had fallen into the water and had not resurfaced.The man has been identified as Joe Williams, 70, who is from the greater Savannah area."Our thoughts are with the loved ones of Mr. 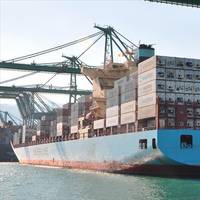 Helicopter and boat crews are scouring the Port of Savannah in search of a crewmember who fell overboard from a containership in the Georgia seaport on Tuesday.The U.S. Coast Guard said its watchstanders at Sector Charleston were notified at approximately 3 a.m., Tuesday by Georgia Ports Authority that a 70-year-old man was missing from the Maersk Tukang.The crewmember did not resurface after falling into the water from a gangway while boarding the Singapore-flagged ship, a Coast… 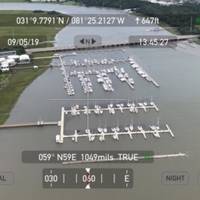 In the southeast United States, the Port of Savannah, Georgia is now open with a 36-foot draft restriction and the Ports of Brunswick, Georgia and Charleston, South Carolina remain closed to commercial operations following Hurricane Dorian.Assessment teams are conducting surveys of channel depth, verifications of aids to navigation and inspections of port facilities.“Maintaining safe and efficient operations on our region’s waterways is a top priority,” said Captain John Reed, Sector Charleston Commander. 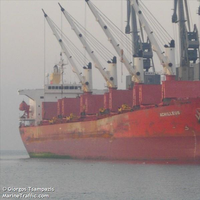 Portline Bulk International S.A. pleaded guilty in federal court in Charleston, South Carolina, to one count of violating the Act to Prevent Pollution from Ships and one count of Obstruction. The charges stem from the falsification of the Oil Record Book onboard the M/V Achilleus, a Maltese-flagged ocean-going bulk carrier ship managed by Defendant Portline.From April 2017 to August 2018, senior members of the vessel’s engineering team oversaw and participated in the bypass of the ship’s Oil Water Separator utilizing a yellow plastic hose, referred to as a magic pipe. 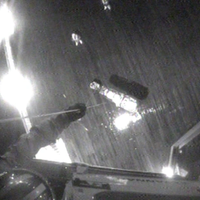 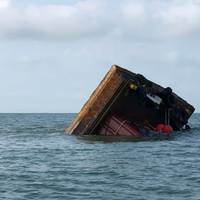 The U.S. Coast Guard said it is responding to a 30-foot barge which capsized near Surfside Beach, S.C., Wednesday.Coast Guard Sector Charleston is working closely with the South Carolina Department of Health and Environmental Control and the barge's owner to identify any potential environmental impacts.The cause of the incident is under investigation. 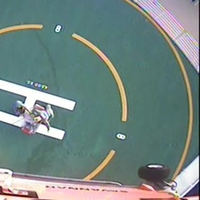 The Coast Guard rescued three fishermen Tuesday after the fishing vessel they were on caught fire 1 mile east of St. Catherines Island, Georgia. Coast Guard Sector Charleston Command Center watchstanders received a call from a crew member aboard the fishing vessel Sea Puppy at 3:16 p.m. who stated their boat was on fire and taking on water. A Coast Guard Station Tybee Island 29-foot Response Boat - Small boat crew and an Air Station Savannah MH-65 Dolphin helicopter aircrew launched at approximately 3:25 p.m. The Dolphin crew arrived on scene at 4:30 p.m., hoisted the fishermen and transported them to Air Station Savannah to awaiting EMS. No injuries were reported. Coast Guard pollution investigators arrived on scene, and the cause of the fire is under investigation.

Four people and a dog were rescued from a sailboat approximately 290-miles off the coast of Savannah, Georgia, Wednesday. Members of Coast Guard Sector Charleston were notified by Boat U.S., that the 38-foot sailboat Luna C. suffered engine failure and damage to the sailboat’s mast, Wednesday. Watchstanders at Sector Charleston used the Coast Guard’s Automated Mutual-Assistance Vessel Rescue System (AMVER), to contact the crew of the Jennifer Schepers, a 590-foot Liberian flagged container ship. The crew of the Jennifer Schepers diverted from their course to assist the four individuals and their dog and took them aboard. The four people and their dog rode aboard the Jennifer Schepers to the ship's next port of call in Wilmington, Delaware, where they safely disembarked earlier today.

A Filipino citizen and the captain of the tanker ship, T/V Green Sky, pleaded guilty today to one felony count in federal court in Charleston, South Carolina, for obstructing a U.S. Coast Guard investigation into pollution crimes aboard the vessel. Genaro Anciano, 52, who was the highest ranking officer aboard the ship, pleaded guilty to one count of Obstruction of an Agency Proceeding. The charge stems from a Coast Guard investigation in late August 2015 into the bypass of pollution prevention equipment, including the use of a “magic device,” on the Green Sky. In court papers, the defendant stated that members of the ship’s engine room, including a senior officer, admitted to illegally discharging overboard. 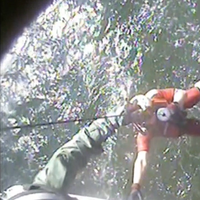 Two fishermen were rescued from their sinking shrimp boat by a U.S. Coast Guard aircrew Friday off the coast of Saint Simons Island near Brunswic, Georgia. Watchstanders at Coast Guard Sector Charleston received the initial report at approximately 9:30 a.m., on VHF channel 16 from one of the distressed fishermen, stating that their 55-foot shrimp boat was taking on water and was in danger of sinking. While the watchstanders made arrangements to launch a rescue crew from Coast Guard Air Station Savannah…

One person was killed and two people were injured when a boat ran aground on Shutes Folly off Charleston, South Carolina, late Thursday evening, the U.S. Coast Guard reported. One man was killed after being ejected from the vessel. Two female passengers were treated for injuries and were taken to the Medical University of South Carolina. Watchstanders at Coast Guard Sector Charleston received the initial report of the incident from one of the injured passengers, stating their recreational boat had run aground with enough force to eject one person from the boat. A boatcrew from Coast Guard Station Charleston was launched aboard a 29-foot Response Boat — Small II to assist. The deceased was transported by a Mt. Pleasant Fire Department response boat.

Coast Guard Marine Safety Unit (MSU) Savannah informs it has held a change of command ceremony to formally recognize transfer of command of the unit from Cmdr. Joseph Loring to Cmdr. Amy Beach. Cmdr. Loring served as commander of MSU Savannah for the past three years and is departing to continue his service at Coast Guard Headquarters in Washington, D.C. Loring said Savannah has an excellent and strong maritime community and provides unparalleled military support, and the MSU does great work so it is hard for him to leave. “I’ve had a great tour,” he added. Cmdr. Amy Beach  who previously served as chief of the prevention department at Coast Guard Sector Long Island Sound in New Haven… 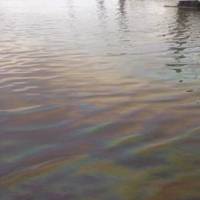 U.S. Coast Guard pollution responders are continuing to respond to reports of pollution in Charleston City, Bristol and Ashley River marinas Sunday. Boaters reported pools of thick, purple diesel-type product pooling in the marinas Saturday evening. A decision was made late Saturday night to federalize the response in order to use the Oil Spill Liability Trust Fund for cleanup, but by Sunday morning most of the product had dissipated and became unrecoverable due to heavy rainfall so the fund was not needed.

The U.S. Coast Guard (USCG) said in a news release that USCG boat and air crews are assisting the Georgia Department of Natural Resources in a search for survivors of a reported plane crash near Grant Creek on Mackay River, east of Golden Isles Aviation in St. Simons Island, Ga., Monday. According to the report, Coast Guard Sector Charleston watchstanders were notified at 7:10 p.m. of FAA reports of lost radar contact with a twin-engine plane carrying two people and subsequent reports from the public of crash-like noises near Grant Creek. A helicopter crew from Coast Guard Air Station Savannah, Ga., and a boatcrew from Coast Guard Station Brunswick…

The Coast Guard rescued three mariners from a sinking fishing vessel Saturday in the vicinity of Calibogue Sound, S.C., January 12. Watchstanders in the Coast Guard Sector Charleston command center received a report from Beaufort County Dispatch stating the 62-foot fishing vessel Christina Leigh was taking on water, at 3 p.m. The three mariners aboard had to place the call via cell phone since their VHF radio was damaged. Sector Charleston personnel put out an Urgent Marine Information Broadcast and launched crewmembers from Coast Guard Station Tybee Island at 3:04 p.m. A crew aboard a rescue helicopter from Coast Guard Air Station Savannah was also launched. The helicopter crew arrived on scene and located the vessel at 4 p.m.

The U.S. Coast Guard hired a contractor Thursday to remove the remaining fuel and hazardous substances that may be aboard the sunken commercial fishing vessel Lady Eva in Shem Creek, in Mount Pleasant, S.C. The contractor, Moran Environmental, was hired after the owner’s attempts to do so were unsuccessful. Charleston County 911 Consolidated Dispatch notified the Coast Guard that the 70-foot vessel was sinking at the dock, Wednesday morning. Members assigned to Coast Guard Sector Charleston were dispatched to monitor the recovery efforts of the vessel, including the potential discharge of fuel and hazardous materials. As a result of the recovery efforts by the owner, Coast Guard hired a contractor, Moran Environmental, to conduct clean up operations.

Members assigned to U.S. Coast Guard Sector Charleston are monitoring a sunken vessel Wednesday for potential pollution in Shem Creek, in Mount Pleasant, S.C. The Coast Guard was notified by the Charleston County 911 Consolidate Dispatch that the commercial fishing vessel Lady Eva was at the Wando Seafood Company dock and sinking in Shem Creek. Upon being notified of the incident, the Coast Guard dispatched pollution responders to determine if the vessel was discharging any hazardous material. The owner of the Lady Eva informed the Coast Guard the vessel had little to no fuel aboard due to operations over the last few days. Soft sorbent padding and sausage boom has been placed around the vessel in an effort to capture any residual pollution. 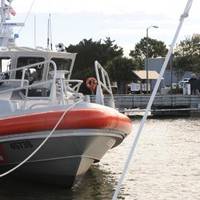 Members of Coast Guard Station Tybee Island held a ceremony at the station Tuesday to recognize the arrival of their newest response boat. Along with the Station Tybee Island crew, members from Coast Guard Sector Charleston, the Coast Guard Auxiliary, the mayor of Savannah, Ga., the pro tempore mayor of Tybee and representatives from local agencies attended the ceremony. Following the official proceedings, guests were invited to go aboard the Response Boat-Medium and view the new vessel.

Fuel to be Removed from Sunken Boat in S.C.

The U.S. Coast Guard contracted the removal of any fuel or hazardous substances that may be aboard the 65-foot motor vessel Wanderer Monday, after the vessel sank in the Intracoastal Waterway at Osprey Marina in Myrtle Beach, S.C., Saturday morning. Personnel at Coast Guard Sector Charleston were notified of the sunken vessel and directed pollution responders to investigate further. The vessel Wanderer was found partially submerged at the pier and was actively sheening diesel fuel. The responsible party made initial efforts to mitigate the spread of pollution to the local waterways by having an absorbent boom deployed around the vessel and dock. Horry County Fire and Rescue and Towboat US recovered or removed a total of seven 55-gallon drums and two 50-gallon fuel tanks from the vessel.