Florida Braces for a Hit as Dorian Strengthens 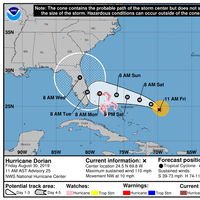 Florida's governor on Friday urged residents in the state to stock up on at least a week's worth of food, water and medicine and to prepare to lose power and cellphone service for days after Hurricane Dorian makes landfall early next week.The slow march and rising intensity of the storm, which is moving in a northwestern direction to the Bahamas, has alarmed forecasters who worry parts of Florida will be walloped by strong winds, a storm surge and heavy rain for an extended period."I think there’s a pretty high degree of certainty that this is going to be a major hurricane… 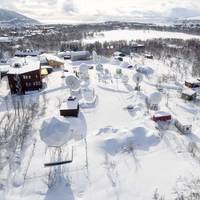 The state-owned enterprise Space Norway signed a NOK 618 million (USD 71.5 million) contract with Kongsberg Satellite Services (KSAT) for the delivery of ground station services to provide satellite-based broadband in the Artic.Space Norway owns 50% of Kongsberg Satellite Services (KSAT), a company that reads data from satellites that are observing the Earth from space.The contract is related to Space Norway’s newly announced cooperation with the satellite operator Inmarsat and… 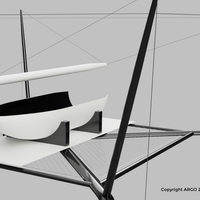 Parker Shinn and Morrelli & Melvin introduce the ArgoX90, a unique concept designed to significantly reduce space launch and rocket component recovery costs.Rocket reusability has become the space industry’s focus to reduce cost. While SpaceX has landed boosters on drone ships hundreds of miles out to sea, expensive parts of a rocket have still proven unrecoverable. The ArgoX90 may change that.“A boat like this could lower launch costs by 10% in some cases,” said Shinn, who conceived of the original concept. 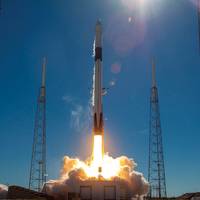 The U.S. Coast Guard’s mission of keeping the seas safe will soon get an additional boost from space with two polar satellites. The two satellites, called “cube satellites” or “cubesats” for their small size of about 60 square centimeters, or a little under 2 feet, will be part of a payload on a SpaceX Falcon 9 rocket scheduled to launch from Vandenberg Air Force Base in California Nov. 28. Although the Coast Guard has used satellite technology for years, these two are the first to be entirely dedicated to a Coast Guard mission. The initiative is part of the U.S.

HawkEye 360 has launched its first cluster of three, formation-flying small satellites aboard a SpaceX Falcon 9 rocket.The Radio Frequency (RF) data analytics company said in a release that the Pathfinder satellites will deliver a unique source of radio frequency (RF) data that HawkEye 360 will use to create first-of-its-kind RF-based analytics."The successful launch of our Pathfinder satellites is the biggest moment in our company's young history," said John Serafini, CEO, HawkEye 360. "I am extremely proud of what our 30-person team has accomplished over the past three years.

NSSLGlobal has signed a Service Provider agreement with Iridium Communications Inc. that will see NSSLGlobal offer the new Iridium Certus L-Band service as part of its portfolio of maritime satcom offerings to its extensive customer base. Iridium Certus will be offered both as a standalone L-Band service and in conjunction with NSSLGlobal’s premier VSAT IP@SEA service as its preferred service assurance offering. The Iridium Certus service is suitable for vessels across the maritime spectrum, from recreational yachts and workboats to commercial fishing trawlers and merchant vessels.Iridium Certus will initially offer speeds of up to 352kbits but by early 2019 this will double to 704kbits ensuring that the service will be the most global and fastest L-Band satellite solution available. 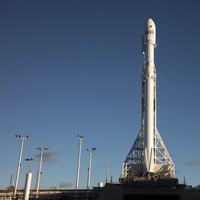 Iridium Communications Inc. announced that the seventh Iridium(r) NEXT mission has been targeted by SpaceX for launch on July 20, 2018, from Vandenberg Air Force Base in California.The Falcon 9 rocket will launch 10 Iridium NEXT satellites to low Earth orbit (LEO) from Vandenberg Air Force Base (VAFB) in California at approximately 5:12 am PDT (12:12 UTC). An exact instantaneous launch window time will be available closer to the launch date. As the second-to-last launch of the planned Iridium NEXT program… 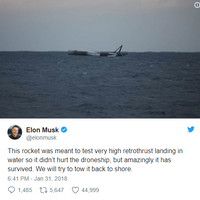 After SpaceX launched its second Falcon 9 Rocket of the year, the company chose not to land the booster but instead dispense it into the ocean. Shockingly, it survived its fall and laid bobbing, fully intact in the Atlantic. SpaceX will now try to salvage the rocket by towing it back to shore, according to SpaceX CEO Elon Musk.

Iridium Communications Inc. announced that the fifth Iridium NEXT launch has been targeted by SpaceX for March 18, 2018 at 8:19 a.m. PDT from Vandenberg Air Force Base in California. The first of four launches planned for 2018, Iridium-5 will deliver 10 more Iridium NEXT satellites to orbit, bringing the total number of new satellites deployed to 50. This launch will use the same Falcon 9 first stage as the Iridium-3 launch that took place in October 2017 and begin a rapid-cadence launch schedule targeting completion of the Iridium manifest by mid-2018. "We are entering the home stretch," said Matt Desch, chief executive officer, at Iridium. "This is going to be a monumental year for us as we complete our constellation refresh.

Iridium Communications announced that, SpaceX successfully launched the fourth set of 10 Iridium NEXT satellites into orbit from Vandenberg Air Force Base in California. The launch marks the midway point of the Iridium NEXT launch program, and was the first Iridium launch to use a SpaceX flight-proven rocket. The first stage booster for Iridium-4 was previously used for Iridium-2, making Iridium the first company to reuse the same rocket booster. Each launch strategically delivers new satellites to specific orbital planes… 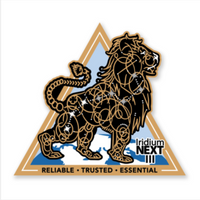 Iridium Communications has announced the successful third launch and deployment of 10 Iridium NEXT satellites. The satellites were delivered into low-Earth orbit approximately one hour after a SpaceX Falcon 9 rocket lifted off from Vandenberg Air Force Base in California at 5:37 a.m. PDT. With two successful launches having already been completed this year, this third batch of 10 satellites brings the total number of Iridium NEXT satellites in orbit to 30, nearly half the amount required for a full Iridium NEXT operational constellation. 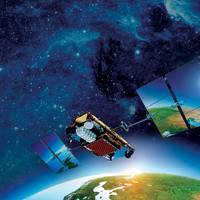 Iridium Communications Inc. (NASDAQ: IRDM) has announced that the upcoming Iridium NEXT launch has been targeted for September 30, 2017 at 6:30 a.m. PDT. This launch will deliver another 10 Iridium NEXT satellites to orbit on SpaceX’s Falcon 9 rocket and will bring the total number of Iridium NEXT satellites deployed to 30. SpaceX selected the September 30th launch date based on rocket and Vandenberg Air Force Base range availability. SpaceX’s targeted launch schedule accommodates completion of the Iridium NEXT constellation as planned in mid-2018.

Iridium Communications Inc. announced that two key milestones along the path to becoming the second recognized provider of Global Maritime Distress Safety System (GMDSS) services have been reached. During its 98th session this past June, the International Maritime Organization's (IMO) Maritime Safety Committee (MSC) adopted new performance standards for GMDSS equipment and approved amendments to the Safety of Life at Sea (SOLAS) Treaty, which pave the way for Iridium to become a recognized GMDSS service provider. Now, the key remaining step in the approval process is an IMO resolution recognizing Iridium as a certified GMDSS mobile satellite service provider. Iridium expects this will be completed during calendar year 2018, with Iridium GMDSS service to begin in 2020.

Iridium has launched 10 of its Iridium NEXT satellites US aboard a SpaceX rocket launched from Vandenberg Air Force Base, California. This payload of 10 satellites was deployed into low-Earth orbit, approximately one hour after a SpaceX Falcon 9 rocket lifted off from Vandenberg, at 1:25pm PDT (20:25 UTC). With this launch complete, there are now 20 Iridium NEXT satellites in orbit, establishing the infrastructure for groundbreaking technologies such as Iridium Certus and Aireon's space-based Automatic Dependent Surveillance-Broadcast (ADS-B) aircraft tracking and surveillance service.

Iridium Communications announced the second launch for the Iridium NEXT satellite constellation has been moved earlier, and is now targeted for June 25, 2017 at 1:24:59 p.m. PDT with an instantaneous launch window. SpaceX informed Iridium that range availability had opened up at Vandenberg Air Force Base (VAFB) in California, where SpaceX’s west coast launch facility is located, and planned to target Iridium’s launch four days earlier than originally scheduled. This launch will deliver the second payload of 10 Iridium NEXT satellites to orbit, bringing the total to 20 Iridium NEXT satellites in space. “We’re excited for this next launch,” said Matt Desch, chief executive officer, Iridium. 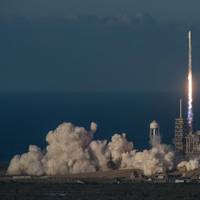 Inmarsat, a provider of global mobile satellite communications, has confirmed the successful launch of the fourth, high-speed broadband communications satellite in its transformational Global Xpress (GX) constellation. Inmarsat GX is the world’s first globally available, broadband connectivity service and was created to enable communities across the world to benefit from the emerging digital society. Inmarsat-5 F4 (I-5 F4) was launched by SpaceX on a Falcon 9 rocket at 00:21 (BST) / 19:21 (ET) from the historic launch pad 39A at NASA’s Kennedy Space Center in Florida.

Iridium Communications has announced it has received a targeted launch date of mid-June for the second mission of ten Iridium NEXT satellites. Originally anticipated for mid-April of 2017, the date has shifted due to a backlog in SpaceX’s launch manifest as a result of last year’s September 1st anomaly. This second launch will deliver another ten Iridium NEXT satellites to low-Earth-orbit (LEO) on a SpaceX Falcon 9 rocket. SpaceX is targeting six subsequent Iridium NEXT launches approximately every two months thereafter. This announcement comes as Iridium has successfully connected the first Iridium NEXT satellite via its crosslinks into its global LEO constellation. The new satellite is expected to begin providing service to Iridium customers in the coming days. 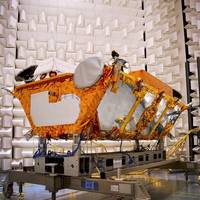 Iridium Communications announced the successful launch of its first ten Iridium NEXT satellites. The satellites were delivered into low-Earth orbit approximately one hour after the SpaceX Falcon 9 rocket lifted off from Vandenberg Air Force Base in California at 9:54:39 a.m. PST. Iridium NEXT is the company’s next-generation satellite constellation, replacing and enhancing its existing network of low-Earth orbit satellites spanning the entire globe – the largest commercial satellite constellation in space.

Unmanned Vessels: The Future is Now 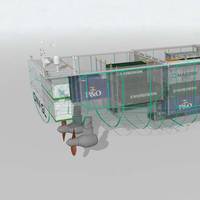 There is a global boom in the development of unmanned systems, from below the ocean’s surface to high in the sky to the world’s roads. Add to this list the maritime industry, on both military and civilian vessels. Maritime Reporter & Engineering News examines in depth recent developments taking place in Europe to discover general thoughts and technical trends driving the future of unmanned shipping. The joint European Research Project MUNIN was finalized in August 2015, a project… 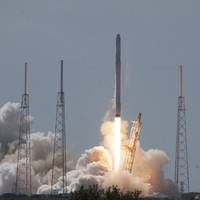 The U.S. Coast Guard informs it is working with SpaceX and partner agencies to monitor the debris field of the exploded Falcon 9 rocket in the Atlantic Ocean more than 150 miles off the Florida-Georgia coast. The unmanned SpaceX CRS-7 rocket was meant to deliver supplies, hardware and other cargo to the International Space Station, but a launch failure caused it to explode just after liftoff from Cape Canaveral Air Force Station on June 28. The Coast Guard has issued caution to vessels transiting the area and is asking the public to report any sightings of debris that may wash ashore.

Inmarsat has provided an initial update on the launch schedule for Inmarsat-5 F3 (I-5 F3) following the failure of the preceding Proton Breeze M launch from the Baikonur Cosmodrome in Kazakhstan on Saturday 16 May. According to an announcement by Inmarsat’s launch partner, ILS, the Proton Breeze M rocket carrying the Centenario satellite suffered a disabling anomaly during the operation of the third stage, approximately eight minutes after lift-off, resulting in the loss of the satellite and rocket. A Russian State Commission has begun the process of determining the reasons for the failure. 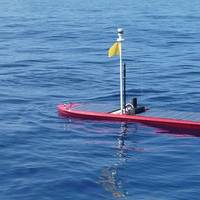 Liquid Robotics, an ocean data service provider and developer of the Wave Glider, was named the 2013 Gold Medal winner for innovation in power generation and utilization. Presented at the 26th Edison Awards Ceremony and Gala event, Liquid Robotics was honored for the creation of its wave powered autonomous ocean robot, powered solely by the planet’s endless supply of wave and solar energy. This innovation transforms how the world can economically and pervasively observe, monitor and protect the world’s oceans.