Dutch outfit TMA Logistics has been commissioned by Siemens Gamesa Renewables Energy (SGRE) to provide the transhipment and transhipment of wind turbines for Windpark Fryslân.Wind farm Fryslan comprises 89 wind turbines that will be realised in the Frisian part of the IJsselmeer, near Breezanddijk. The project is expected to start in August 2020 and the wind farm will supply electricity to ± 500,000 households.SGRE is carrying out the project in close cooperation with Van Oord Offshore Wind BV. Van Oord is laying the foundations and laying the cables and monopiles.

The world’s largest wind turbine, Haliade-X, is being tested on Maasvlakte at Port of Rotterdam. This ‘test rig’ was realised via innovative cross-pollination between the American GE Renewable Energy, Sif Netherlands and Pondera Consult.Huge 107-meter-long blades have recently started rotating on Maasvlakte. These are part of the Haliade-X12 MW, the world’s most powerful wind turbine.It is 260 meters high and has a 12-megawatt capacity, sufficient to generate energy to supply electricity to some 16,000 households in the region. 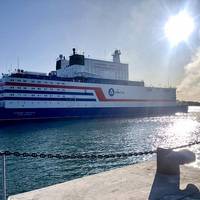 Russia's first-floating nuclear power plant has arrived to its permanent base near an isolated Russian town across the Bering Strait from Alaska, Russian state nuclear energy company Rosatom said on Saturday.Developed by Rosatom, the plant, known as "Akademik Lomonosov", set off on a 5,000 km (3,100 mile) journey on Aug. 23 through Arctic waters to reach the Chukotka region. Rosatom said it aims to make the floating station operational by the year-end. It would become the world's… 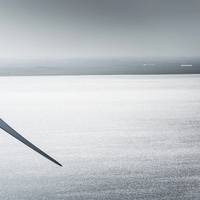 MHI Vestas Offshore Wind will supply 100 turbines for the 950-megawatt (MW) Moray East offshore wind farm in waters off the northeast coast of Scotland.Under the contract, MHI Vestas will deliver one hundred of its V164-9.5 MW offshore wind turbines for the project in the Moray Firth. The order includes a 15-year service agreement, MHI Vestas said. This is the company’s largest ever MW project.Moray Offshore Windfarm (East) Limited, known as Moray East, is a 950 MW offshore wind project 22km from the coast of Scotland… 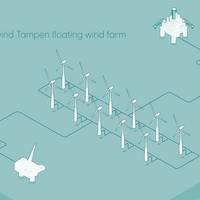 Norway's Equinor said on Tuesday it is considering whether to build a pioneering offshore wind farm with floating turbines to supply electricity to two North Sea oilfields as part of a strategy to curb greenhouse gas emissions.The project at the Gullfaks and Snorre oilfields would cost around 5 billion Norwegian crowns ($592 million) and could reduce Norway's emissions of carbon dioxide by more than 200,000 tonnes per year, Equinor said."This could be the first time an offshore wind farm is directly connected to oil and gas platforms," state-controlled Equinor said in a statement.

Green Shipping: Toward a Clean Future 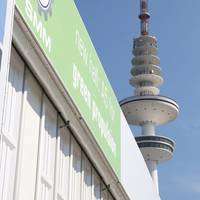 The International Maritime Organization (IMO) has announced its targets of cutting greenhouse gas emissions from global shipping in half by the year 2050, and to make ships entirely CO2-neutral before 2100. But long before that, the so-called sulphur cap will take effect: From 2020 all oceangoing ships must run on fuel that contains no more than 0.5 per cent of sulphur. According to estimates by classification society DNV GL, up to 70,000 ships will be subject to this requirement. 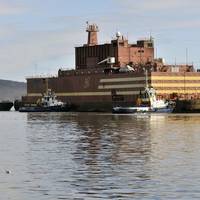 Russia's first-floating nuclear power plant arrived in the Arctic port of Murmansk over the weekend in preparation for its maiden mission, providing electricity to an isolated Russian town across the Bering Strait from Alaska.The state company behind the plant, called the "Akademik Lomonosov", says it could pioneer a new power source for remote regions of the planet, but green campaigners have expressed concern about the risk of nuclear accidents. Greenpeace has called it the "nuclear Titanic".Russian state nuclear company Rosatom… 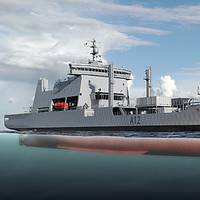 A new polar-class logistic support tanker for the Royal New Zealand Navy (RNZN) will be the first naval vessel to feature the Rolls-Royce Environship design with wave piercing bow. The new vessel, which will replace the 30-year-old HMNZS Endeavor, will be significantly larger than its predecessor. The 23,000-metric-ton tanker will carry out operations in extreme Antarctic conditions and is strengthened and winterized to Polar code 6 requirements. Used under license, the Rolls… 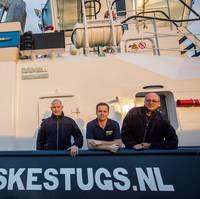 Iskes Towage & Salvage took delivery of a new Damen ASD 2411 in November 2015. In its first 100 days, the tug has been performing vessel assistance duties in the locks and canals around the Dutch Ports of Amsterdam and IJmuiden. Three months after delivery of the Venus, the captain and crew give their comments about the new member of the fleet. Home to a cross-section of industries, the two ports see a wide variety of vessel types and sizes. For Iskes Managing Director Jim Iskes, combining power with minimal dimensions was an important factor.

Turkey's Karadeniz will in the next two weeks begin supplying Zambia with electricity from a power-generating ship as it looks to take advantage of chronic shortages in Africa, the company said on Wednesday. Karadeniz builds what are effectively floating power stations which plug into electricity grids after berthing. They run on fuel oil but can also use natural gas. One of the firm's vessels docked this week at Mozambique's Nacala port, from where it will supply 100 megawatts of electricity for the next two years, power that will then be exported through the grid to neighbouring Zambia. This is the second power ship Karadeniz has deployed to Africa after a 225 MW unit arrived in Ghana last year. Incat Crowther has been commissioned to design a passenger transport ferry to be operated by Cataferry Sdn Bhd, in Malaysia. The main deck features a full width cabin accommodating 151 passengers. This area includes interior seating, a cargo luggage area, locker rooms for switch boards and an entertainment bar. Aft of the cabin features three restrooms and a luggage room to hold cargo. A swim deck is featured below, on the aft portion of the main deck. Forty passengers can be accommodated on the mid deck within the cabin, as 13 can be seated aft of the cabin, outside.

South Africa could deploy power barges using gas to generate electricity to help overcome chronic supply shortages, a senior government official said on Tuesday. Under the proposal, one of 170 submissions sent to the government after it requested ideas for a gas-to-power programme, power generating ships or barges would dock at ports and supply electricity to the national grid. Africa's most advanced economy is struggling to keep the lights on as rolling power cuts are implemented almost daily by power utility Eskom to save the national grid from collapse. "Power barges are a serious option, definitely yes," Ompi Aphane, deputy director general for energy planning at the department of energy told journalists in parliament. 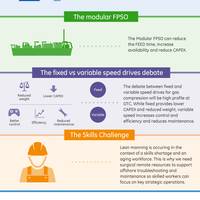 GE’s Power Conversion business (NYSE: GE) has announced that it is working with Daewoo Shipbuilding and Marine Engineering Co., Ltd. (DSME) in South Korea to provide an electrical power and propulsion system for a Norwegian Defence Logistics Organization (NDLO) logistics and support vessel (LSV). GE’s equipment will be installed as a key part of the ship’s hybrid propulsion system, improving fuel efficiency and operating flexibility. In October 2012, GE’s Power Conversion business announced a similar project for the U.K. 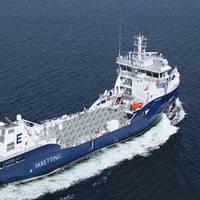 LNG as marine fuel takes another step forward as Eidsvaag AS took delivery of the first vessel of the Rolls-Royce prize winning Environship range this week, featuring a combination of Rolls-Royce design and technologies which reduce CO2 emissions by up to 40 percent compared to similar diesel powered vessels. Once in operation the vessel will operate a demanding schedule with a weekly round voyage along the Norwegian coast delivering feed pellets to fish farms regardless of weather conditions.

Statoil awarded Aker Solutions an engineering, procurement, construction and installation (EPCI) contract for subsea compression topside modifications on the Åsgard field. The Åsgard licence has decided on a concept involving gas compressors installed on the seabed, so-called subsea gas compression. The purpose of the modification is to supply electricity to the Åsgard subsea compressor units, which will be installed in 2013. Åsgard is the first installation worldwide to employ subsea gas processing involving gas compression and this represents an important technological step change in the development of fields in deep and demanding waters and creates exciting opportunities for the industry. 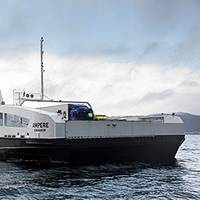 The world’s first electrical car and passenger ferry powered by batteries has entered service in Norway, representing a milestone on the road to operating emission-free ferries along Norway’s coastline, with at least 50 other routes currently able to sustain battery-operated vessels. The Norled ferry uses just 150 kWh per route, which corresponds to three days use of electricity in a standard Norwegian household. Built in conjunction with shipbuilder Fjellstrand, Siemens installed…

Tokyo - Mitsui O.S.K. Lines Ltd. (MOL) has announced the launching of the hybrid car carrier Emerald Ace at the Mitsubishi Heavy Industries Ltd. (MHI). The Emerald Ace, designed to generate zero emissions while berthed, was designated as a project to reduce CO2 emissions from ocean-going vessels, and earned MOL a subsidy from Japan's Ministry of Land, Infrastructure, Transport and Tourism (MLIT) in 2009. The Emerald Ace, slated for delivery in June, 2012, will be the world’s first newly delivered hybrid car carrier and begin test operations of its hybrid power system. The vessel’s hybrid system represents a significant step forward in realizing ISHIN-I, the concept for the next-generation car carrier MOL announced in September, 2009.

Construction of the East Coast’s first shore power port facility will move forward toward a 2014 completion following today’s action by the Port Authority’s Board of Commissioners. The project will create 30 jobs and result in $22 million in economic activity. At its monthly meeting, the Board authorized additional funds provided by the Empire State Development Corporation needed to complete the $19.3 million shore power port facility. The project will allow cruise ships serving the Brooklyn Cruise Terminal to plug in to a more environmentally friendly electrical landside power source rather than operating on their diesel generated power while at the dock.

The first CO2-free power is now being fed into the Danish power grid from Anholt offshore wind farm. On its completion next year, the farm, with its total capacity of 400 MW, will be Denmark’s largest offshore wind farm and will deliver power equivalent to the consumption of 400,000 Danish households. The turbine supplier is Siemens Wind Power. “We are on schedule and are therefore already now able to deliver the first green power to the Danes. Efficient project management is one of the reasons for our leadership position in the market for offshore wind energy. Wind power is at the very core of DONG Energy’s strategy and I am delighted that by achieving first power today we are providing a sound contribution towards maintaining Denmark’s leadership position in offshore wind…

Russia has agreed on a new deal to supply coal and electricity to Ukraine, which is struggling with a lack of raw fuel for power plants due to a separatist conflict in the industrial east, Russian officials said on Saturday. The move comes a day after Kiev said it would suspend train and bus services to Crimea, effectively creating a transportation blockade to and from the region annexed by Moscow in March this year. Kiev has briefly cut off electricity to Crimea before. Russia will supply coal and electricity to Kiev without advance payment as a goodwill gesture from President Vladimir Putin…