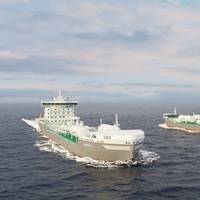 WE Tech Solutions, a leading energy efficiency solution provider, has received an order to supply an integrated package, including Propulsion Drives, Permanent Magnet Shaft Generator, Shore Connection Switchgear, Bow Thruster Motor and DC Link to two new 22000 DWT tankers for chemical and oil products with an option for another two. The tankers are built by Wuhu Shipyard Co. Ltd for the Swedish ship owner Rederi AB Donsötank. WE Tech’s equipment delivery to Wuhu Shipyard will…

Wilhelmsen and Rainmaking’s announced a partnership aiming to spin-out and scale-up existing innovative solutions researched and developed by Wilhelmsen with potential to scale across the industry. Wilhelmsen’s Digi Boiler is the first project to benefit from this collaboration.Minimizing the risks associated with poor boiler water management, Wilhelmsen’s automated boiler water dosing system monitors boiler water condition, dosing chemicals as and when they are needed. Delivering real-time condition monitoring, essential data is accessible to both the vessel’s crew and onshore staff, via a custom- made portal.Recently granted an “Approval in Principle” (AIP) by DNV GL…

Bunkering liquefied biogas (LBG) at the Port of Gothenburg will become easier for the shipping sector with a new agreement signed between FordonsGas and Swedegas."The new agreement between FordonsGas and Swedegas will ensure access to this renewable fuel, a move that has been sought by both shipping companies and their customers," said a press release.Shipping needs to make the transition from oil to environmentally smart alternatives. Liquefied natural gas, LNG, is currently the cleanest marine fuel available due to lower emissions of carbon dioxide… 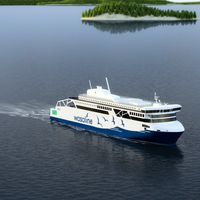 WE Tech Solutions Oy (WE Tech) has been awarded the contract for delivery of an avant-garde Hybrid Electric Propulsion solution to Rauma Marine Construction Oy (RMC).The solution includes Propulsion drives, Energy Storage System (battery banks and DCDC converters), Main Propulsion Switchboards, Shore connection switchgears, Energy Management System and the Propulsion Control System. WE Tech and RMC will together bring Wasaline’s new RoPax ferry to the next level of sustainable shipping. The new ferry is being built by RMC in Rauma Finland and is scheduled for delivery in May 2021.

WE Tech Hybrid Propulsion for Wasaline

A new Danish maritime research, development and innovation partnership has been established under the name of ShippingLab.Danish shipping company J. Lauritzen together with Maersk Tankers, DFDS, Torm and a range of other shipping companies, industrial maritime suppliers, research and technology institutions and universities have formed the partnership, where industry and academia work together with the purpose of solving practical issues to the benefit of society.The overarching goal of the partnership is to develop Denmark’s first autonomous, environmentally friendly ship.

Orca AI launched to prevent maritime collisions by providing AI-backed navigational solutions for the shipping industry, backed by a $2.6 million seed round led by MizMaa Ventures and including funding from Ray Carriers and The Dock.Collisions and other maritime incidents have been on the rise for the past several years, jumping from 2,000 in 2011 to an estimated 4,000 in 2017. The vast majority of maritime collisions occur in congested waterways, often in areas near ports or in narrow waterways. Current navigation tools are less effective in these situations and rely on the crew’s judgment to navigate safely, providing room for human error which is the cause of more than 75% of collisions.Orca AI’s system is designed for crowded waterways and the harshest, lowest visibility, scenarios.

France-based Port Community System operator SOGET, in close collaboration with French customs, port authorities, ferry companies and road hauliers, will offer an integrated e-freight corridor based on a digitalized anticipation of information flows related to cross-Channel goods."Cross-channel RO-RO traffic of trucks and its logistics’ fluidity in ports are crucial matters for the competitiveness of the Great-Britain - Europe corridor. With 5 million trucks on the coastal border territory… 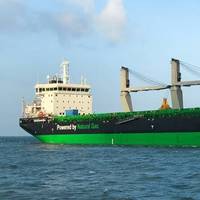 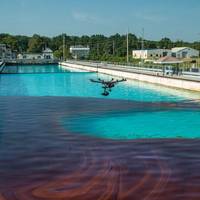 No two oil spill response operations are the same. Each can present new and even tougher challenges for spill responders as they detect, contain and recover spilled oil. Diverse aspects affecting oil spill response operations can be the physical environment, spill monitoring, use of chemical dispersants, and the availability of proper technology for the situation.Some challenges have been met through research and technology development of techniques for dealing with spills. However… 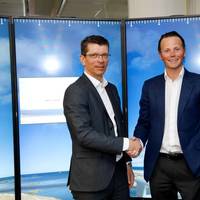 The road toward autonomy has taken a major step with the announcement that Wilhelmsen and Kongsberg are collectively taking the next step in autonomous shipping by offering a complete value chain for autonomous ships, from design and development, to control systems, logistics services and vessel operations. The new venture is dubbed "Massterly". What is Massterly? The Massterly plan is to have land-based control centers monitor and operate autonomous ships globally, tapping Kongsberg's tech solutions and Wilhelmsen's logistics and ship management operations.

WE Tech to Equip Ektank Vessels

WE Tech Solutions said it has received an order to deliver its permanent magnet shaft generator solution to two new 18,600 dwt chemical tankers with an option for another two. The tankers are built by China State Shipbuilding Corporation (CSSC) Chengxi Shipyard for the Swedish ship owner Ektank AB. WE Tech’s equipment delivery to Hudong Heavy Machinery Co., Ltd. will commence in October 2017. WE Tech’s solution is based on variable frequency drive technology (WE Drive) and the direct drive Permanent Magnet Shaft Generator. The solution allows the main engine to run at variable speed while the electrical network is generated by the Shaft Generator. Therefore, there is no need to run the auxiliary engines or generators when sailing. 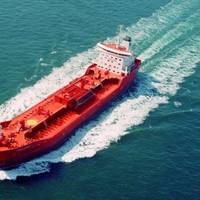 Corvus Energy Inc. has announced  that it has been selected as the supplier of the lithium ion based energy storage system (ESS) for a new hybrid chemical tanker being built for Rederiet Stenersen AS of Norway. The chemical tanker will be the first vessel of its kind to utilize an ESS for propulsion. Corvus Energy will supply its next generation Orca Energy ESS solution to integrate with WE Tech Solutions’ propulsion system, which will deliver industry environmental performance for this new vessel. 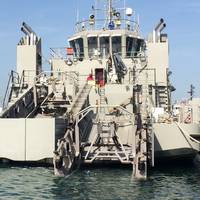 Ending 2016, TBV Marine Systems, part of High-Tech Solutions & Design B.V., has finished the commissioning for eight FRC/RHIB Launch and Recovery systems (LARS) that have been delivered for four new vessels ordered by the Kuwait Coast Guard.  For this project, the LARS was designed to carry a craft with a length of nearly nine meters, with a maximum weight of six tons. For each vessel, the stern ramp was designed to carry two systems, which were both powered by one hydraulic power unit. 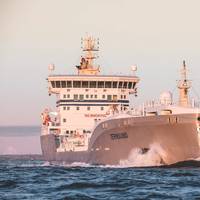 Since it started publishing in 1939, Maritime Reporter & Engineering News has recognized excellence in ship construction. The Switch has been engaged in the maritime industry for only three and a half years, but it already has approximately 20 ships in its reference list, including the first, the 15,000 dwt M/T Ternsund  (featured on this month’s cover) owned by Terntank, which is a fourth generation company that in 1958 was a one ship company, and today is an operator of ten modern chemical/product tankers in the range from 8,000 to 15,000 dwt.

WE Tech Expands Into Australia 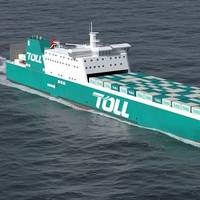 WE Tech Solutions (WE Tech), an energy efficiency solutions provider in the marine industry, and The Switch, a technology specialist of permanent magnet machines for advanced marine drive trains, have been chosen to deliver their permanent magnet shaft generator solution to Australian Toll Shipping for a series of two 12,000 dwt RORO vessels. The Sinotrans & CSC affiliated Jinling Shipyard in China will build the ships. Delivery of advanced equipment solution from WE Tech and The Switch will commence in August 2017.

Global trade enabler DP World and the Summa Group, a diversified business with significant infrastructure investments in Russia, have signed a Memorandum of Understanding (MoU) to explore investment opportunities in ports, special economic zones and inland logistics facilities in the Russian Federation. According to the MOU, the parties have decided to enter into preliminary discussions to consider the potential of a relationship between them to develop investment opportunities in ports… 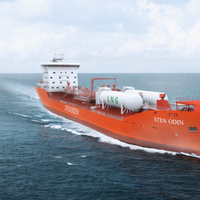 Energy efficiency solution provider WE Tech Solutions said it has received an order to deliver its direct-drive permanent magnet (PM) shaft generator solution to a series of two 17,500 DWT IMO class II chemical tankers, with an option for two more. The Switch, a technology specialist of megawatt-class PM machines for advanced marine drive trains, will deliver the PM shaft generators to be used in the solutions provided by WE Tech. The tankers will be built by the Chinese shipyard Taizhou Kouan Shipbuilding Co., Ltd. for Bergen-based Norwegian shipowner Rederiet Stenersen AS. 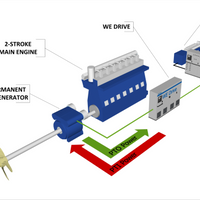 WE Tech Solutions (WE Tech), an energy efficiency solutions provider in the marine industry, has received an order to deliver its direct-drive permanent magnet shaft generator solution to two new 25,600 dwt dual-fueled handysize bulk carriers, with an option for two more. The Switch, a technology specialist of megawatt-class permanent magnet (PM) machines for advanced marine drive trains, will deliver the PM shaft generators to be used in the solutions provided by WE Tech. The vessels are owned by the Finnish ship owner ESL Shipping Ltd.…

The Switch, a specialist of megawatt-class permanent magnet (PM) machines for advanced marine drive trains, has been selected to deliver its PM shaft generator for an LNG carrier with a 45,000 cubic meter cargo capacity, allowing the vessel to gain greater efficiency over its entire speed range. This order is part of a complete energy efficiency system being delivered by WE Tech Solutions (WE Tech) of Finland to Saga LNG Shipping Pte. Ltd. The vessel will be built by China Merchants Heavy Industry Co., Ltd.

Less than a year after opening its first office in Asia, Norwegian e-navigation specialist NAVTOR is expanding in the region again - this time with a dedicated presence in Japan. NAVTOR Japan K.K. will help the firm, known for its simple, efficient and cost effective ENC distribution solutions, continue to roll out its European success worldwide, securing an important foothold in this key shipping arena. “The importance of Japan to shipping, and to suppliers that serve the industry, can’t be overstated,” comments Tor Svanes, NAVTOR CEO. 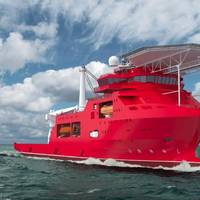 Ultra Deep Group (UDS) signed another contract with China Merchants Heavy Industry to build a Ultra Deep Installer – Multipurpose Diving Support Construction Vessel. Even though the oil market remains in the doldrums, Singapore-based UDS is powering ahead with tis strategic plan to spearhead the development and operation of efficient, cost-effective diving and support vessels in the oil and gas industry, plancing an order for its proprietary design “Red Class 6027” MT design DSCV with a Chinese shipbuilder.