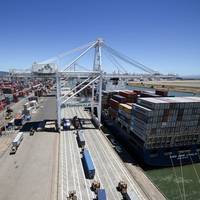 A longshore laborer at the Port of Oakland reportedly fell to his death from the deck of a containership at berth in the early hours on Tuesday.The International Longshore and Warehouse Union confirmed that the accident victim was one of its members. The port said the fatal accident was under investigation by local authorities.“This is a tragedy that strikes everyone very deeply,” said Port of Oakland Maritime Director John Driscoll. “The waterfront is a tightly knit community and if a member of that community succumbs… 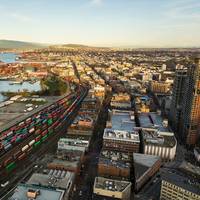 Longshore workers at Canada's biggest port, the Port of Vancouver, were locked out on Thursday in a labor dispute over technology changes, temporarily grinding most shipping there to a halt. The lockout ended in a deal on Thursday with their employer after a few hours, the workers' union said.A tentative agreement on a new contract was reached with the BC Maritime Employers Association, the International Longshore and Warehouse Union Canada said in a statement. Jim Thompson, a spokesman for the International Longshore and Warehouse Union Canada…

One Dead, One Hurt in Los Angeles Port Accident An industrial accident on Wednesday, May 15 at a Port of Los Angeles container terminal tragically took the life of an International Longshore and Warehouse Union (ILWU) worker and seriously injured a second worker. The incident occurred at approximately 7:25 a.m. at Fenix Marine Services at Pier 300. According to initial reports, an equipment accident involving a top loader container handler caused the death of one worker and injured the other. The injured worker was transported to Harbor UCLA Medical Center. The names of those involved in the accident are not yet available. 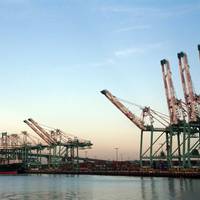 Four women dockworkers have filed federal discrimination claims against the shippers' association that runs 29 ports on the U.S. West Coast, saying they unfairly lost pay and seniority after becoming pregnant. Male dockworkers who temporarily left to serve in the armed forces got benefits denied to women on pregnancy leave, one of the workers, Tracy Plummer, said in an interview. Another woman with a complicated medical history said she tried to work during pregnancy for fear of losing seniority and suffered a miscarriage, according to her complaint. 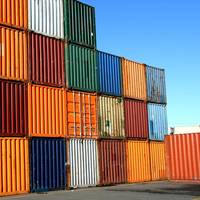 Honolulu-based Hawaii Stevedores, Inc. has received confirmation from Hawaii State Department of Transportation (HDOT) that, together with the state, Hawaii Stevedores will continue the joint development of the Kapalama Container Terminal (KCT). The state has confirmed its commitment for Hawaii Stevedores to lease the new 84-acre, state-of-the-art KCT, which will be constructed at the former Kapalama Military Reserve Terminal at Sand Island in Honolulu, as part of the state’s $448 million harbors modernization plan.

APM Terminals Pier 400 Los Angeles hosted U.S. Secretary of Labor R. Alexander Acosta today, as he toured the world’s largest proprietary container terminal, and met with leadership officials of the International Longshoremen and Warehouse Union, (ILWU) and the Pacific Maritime Association (PMA) as his first official visit to an American port operation since being confirmed as a member of the Trump Cabinet in April this year. The Port of Los Angeles is America’s busiest container port… 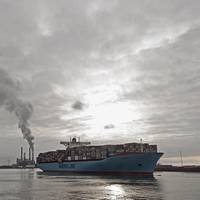 Global shipping is still feeling the effects of a cyber attack that hit A.P. Moller-Maersk two days ago, showing the scale of the damage a computer virus can unleash on the technology dependent and inter-connected industry. About 90 percent of world trade is transported by sea, with ships and ports acting as the arteries of the global economy. Ports increasingly rely on communications systems to keep operations running smoothly, and any IT glitches can create major disruptions for complex logistic supply chains. The cyber attack was among the biggest-ever disruptions to hit global shipping.

Cargo volumes at the Port of Los Angeles reached 8,856,782 Twenty-Foot Equivalent Units in 2016, marking the busiest year ever for a Western Hemisphere Port. The previous record was set in 2006, when the Port of Los Angeles handled 8,469,853 TEUs. “The Port of L.A. is America’s Port  — and we’re breaking records because we understand the importance of innovating and collaborating to move our economy forward,” said Mayor Eric Garcetti. The Port finished the year strong, with December volumes of 796,536 TEUs, a 27 percent increase compared to the same period last year.

Arthur E. Imperatore, Founder and President of New York Waterways; Captain Donald Marcus, International President of the International Organization of Masters, Mates & Pilots; and Christopher Wiernicki, Chairman, President and CEO of the American Bureau of Shipping, were recipients of the maritime industry's most prestigious Admiral of the Ocean Sea awards presented at the 47th annual United Seamen's Service gala industry dinner and dance October 28, 2016. The event was held at the at the Sheraton New York Times Square Hotel, New York City. 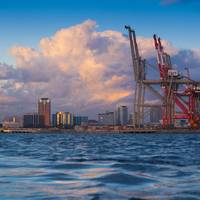 Major cargo shippers and the union representing dockworkers at 29 U.S. West Coast ports have agreed to talks on a possible extension of their current contract, which is set to expire in mid-2019, the two sides said in a joint statement on Tuesday. Negotiators for the Pacific Maritime Association (PMA) and the International Longshore and Warehouse Union tentatively plan to meet on Nov. 1-2 to discuss the proposal, which comes about 19 months after a contract settlement that capped months of labor strife and shipping disruptions at the ports.

One Hanjin Ship Cleared to Dock at U.S. Port

A Hanjin Shipping Co container vessel idled off the coast of Mexico after the company's bankruptcy has received permission to dock and unload cargo at the Port of Long Beach, industry and union officials said Friday. Authorization for the Hanjin Greece to enter the port came after bankruptcy courts in the United States and South Korea cleared the way for the company to spend $10 million to unload cargo from four ships headed for ports on the U.S. West Coast. South Korea said it expects Hanjin Greece to start unloading cargo on Saturday morning U.S. time. 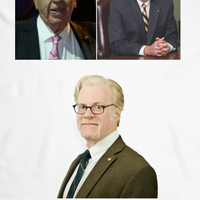 The United Seamen's Service (USS) 2016 Admiral of the Ocean Sea Awards (AOTOS) will be presented to Arthur E. Imperatore, Founder and President of New York Waterways; Donald Marcus, President of the International Organization of Masters, Mates & Pilots; and Christopher Wiernicki, Chairman and CEO of American Bureau of Shipping. The maritime industry's most prestigious awards will be presented at the 47th annual gala industry dinner and dance at the Sheraton New York Times Square Hotel, New York City, on October 28, 2016.

The demand for container shipping is really not going anywhere at the moment. Indicators for growth in the first months of 2016 point to limited overall demand and huge variations from trade to trade. In addition, all numbers are impacted by Chinese New Year, which disrupts most trade figures for the first months of any year. BIMCO’s own data for the United States (US) imports on the east coast shows an increase of 6.5%, a significant rise even above the strong level seen in 2015. 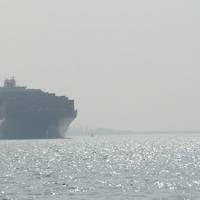 Ports on the U.S.’ eastern coast had a very busy 2015 in terms of container traffic, with 7.9 million TEU of loaded containers entering the U.S. East Coast in 2015, a 12.6 percent increase compared to 7 million in 2014, BIMCO reports. While the U.S. East Coast ports experienced a surge in incoming traffic, labor issues and port congestion gloomed over the U.S. West Coast. The start of 2015 was dominated by the ongoing contract negotiations between the International Longshore and Warehouse Union (ILWU) and the Pacific Maritime Association (PMA). 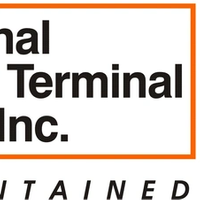 For the second time in ten weeks, the National Labor Relations Board (NLRB) has affirmed the decision of an administrative law judge that the International Longshore and Warehouse Union (ILWU International) and ILWU Local 8 (Local 8) violated federal labor law by engaging in coercive activity directed against ICTSI Oregon, Inc. at Terminal 6 at the Port of Portland. The NLRB concluded that, between September 2012 and June 2013, ILWU members worked in a deliberately slow manner…

The Port of Portland Commission today welcomed new commissioners Alice Cuprill-Comas and Gary Young. Both were earlier nominated by Gov. Kate Brown and confirmed the Oregon State Senate. Cuprill-Comas of Portland is a transactional lawyer, and is currently legal counsel at Oregon Health & Science University. A member of the Oregon, Washington and Texas State bars, she was in private practice for more than 15 years, most recently as a partner at Ater, Wynne, LLC in Portland. Cuprill-Comas was named a Rising Star by Oregon Super Lawyers in 2010.

Less congestion and efficient cargo movement helped international container volumes through the Puget Sound gateway improve 14 percent in June compared to June 2014, the port reported. Cargo has been rerouted through the ports of Seattle and Tacoma as other U.S. West Coast ports continue to struggle with congestion stemming from the contract negotiations between the Pacific Maritime Association and International Longshore and Warehouse Union earlier this year. Through the first half of the year, volumes remain stable with the Puget Sound gateway handling nearly 1.8 million TEUs, a 3 percent gain year to date, the port said. Containerized exports improved 5 percent on the year to 628,718 TEUs, while imports grew nearly 3 percent to 715,307 TEUs. 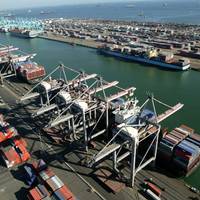 The National Retail Federation (NRF) and more than 100 other business groups called for passage of legislation that would require the Transportation Department to track port statistics, saying it could help avoid a repeat of the congestion and slowdowns that occurred along the West Coast during the labor dispute resolved earlier this year. “U.S. ports are a key component in the American transportation system and the global supply chain that thousands of businesses and millions of workers depend on,” the letter said.

International Longshore and Warehouse Union members have ratified a five-year contract governing pay and work rules at 29 West Coast ports, including those of Los Angeles and Long Beach. "Today is a big day for America's number one port -- the Port of Los Angeles. Now that the International Longshore and Warehouse Union and Pacific Maritime Association members have ratified the port labor agreement that we worked on in February, we can now move forward together to make our port the best in the world and keep our economy moving.

Imports Back to Normal After Ratification

Import cargo volume at the nation’s major retail container ports has returned to normal levels following ratification of a new West Coast labor agreement, according to the monthly Global Port Tracker report released today by the National Retail Federation and Hackett Associates. “Despite some lingering labor issues, the volume of cargo and the rate of growth have both largely settled down,” NRF Vice President for Supply Chain and Customs Policy Jonathan Gold said. The Pacific…

US Imports Rising Ahead of Back to School Season 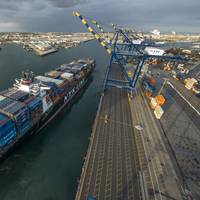 Import cargo volume at the United States’ major retail container ports is expected to increase 7.3 percent this month over the same time last year as retailers stock up for the busy back-to-school season, according to the monthly Global Port Tracker report released today by the National Retail Federation (NRF) and Hackett Associates. “Now that West Coast ports have recovered from the congestion caused by the recently settled contract dispute, retailers are focused on the back-to-school season to ensure that parents can find the supplies and clothing their children need for the fall…