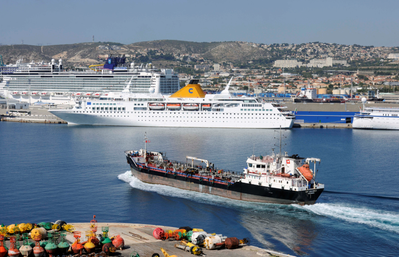 Total 2013 throughput at Marseilles Fos confirmed containers, steel industry bulks, LNG and cruise traffic as the growth drivers at the French port. In contrast, a mounting decline in crude oil and petroleum volumes pegged overall cargo to 80 million metric tons for the year, down 7% on 2012.

Oil and gas still accounts for more than half the cargo handled at one of the world’s biggest oil ports, but volumes have been eroded by the restructuring of Europe’s refinery industry. At just over 46MT, last year’s oil and gas total was 12% and some 5MT lower than in 2012 and 13MT worse than in 2011.

Against this, following 12% growth in 2012, container volumes rose by a further 3% despite the difficult world economic situation – building on the previous year’s million-plus teu milestone with a new port record of 1,097,740 teu. Marseilles-based trades dipped 4% to 224,979 teu but Fos traffic improved 6% to 872,762 teu helped by five new services, including one that prompted a threefold lift in imports from Israel.

Container tonnage also rose 3% overall to 10.77MT and steered general cargo to a 1% increase on 17.33MT. Ro-ro throughput contributed 3.94MT - down 6% after a 9% drop in Corsica traffic – while conventional trades gained a point to 2.62MT due to steel product exports.

Dry bulks rose 7% to 13.17MT on the back of raw materials for the steel industry, which climbed 18% to 9.18MT thanks largely to demand for coal and ore at the ArcelorMittal plant. An 8% decline in agro-bulks to 0.96MT was notable for China replacing France as the main cereals supplier to Algeria.

The 12% slump in oil and gas to 46.13MT saw overall liquid bulks down by the same margin on 49.55MT. Crude imports for domestic refineries fell 4% to 24.46MT, pipeline deliveries to Germany and Switzerland crashed 58% to 2.71MT and refined products were 15% worse on 11.14MT. With LPG stable on 2.14MT, the only growth came from LNG – up 4% to 5.67MT despite the upheaval in global gas trades caused by demand from Asia and the emergence of U.S. shale gas.

Completing the liquid bulks total, chemicals and agro-products were down 3% on 3.42MT. Chemicals slipped 2% to 3.39MT, although biofuels amounted to 1.14MT of this with a 22% increase. In a further encouraging sign, vinyls manufacturer Kem One came under new ownership at the end of the year in a move that should stabilize activity in the sector.

Passenger throughput rose 7% to 2.62 million after cruise numbers soared 31% to 1.17m for a new port record. Home port passengers were up by 17% on 365,000 to represent more than 30% of the total – a percentage that is set to rise to 45% from now on. Ferry carryings on Corsica, Algeria and Tunisia services fell 6% to 1.45m in the face of airline competition on all routes as well as rivalry from Toulon on the ferry links to Corsica.