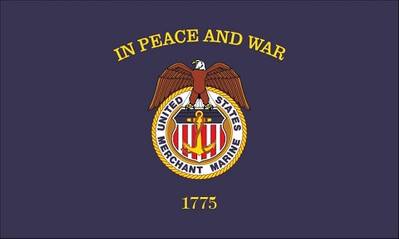 The U.S. Department of Transportation’s Maritime Administration (MARAD) announced the launch of the United States Merchant Marine Flag Program, which will provide U.S. Merchant Marine Flags for display nationwide, honoring the historic and continuing contributions of U.S. Merchant Mariners to our national defense.
The announcement was made by Maritime Administrator Chip Jaenichen during the National Maritime Day celebration in Washington, D.C.
“These flags represent the dedication and sacrifice of the men and women who for over two centuries have powered American prosperity at sea,” said Maritime Administrator Jaenichen. “Through this program, we are spreading recognition of the U.S. Merchant Marine as essential to the Nation as one of our vital sea services.”
The U.S. Merchant Marine enables global projection and sustainment of U.S. Armed Forces by providing assured access to sealift for national and international emergencies supporting troops and allies. President Franklin Delano Roosevelt referred to the U.S. Merchant Marine as “the fourth arm of defense,” and during World War II they suffered a larger casualty rate than any of the other services. Serving the Nation since the Revolutionary War, they continue to serve today, actively supporting the recent United States efforts to combat the Ebola epidemic in West Africa and acting as a key asset in the destruction of the Syrian declared chemical weapon stockpile.
MARAD will provide flags to approved organizations such as nonprofit civic organizations, maritime training and educational institutions and cemeteries where U.S. Merchant Mariners are buried. The criteria for public display include having the U.S. Flag and the flags of other Armed Services already on location.