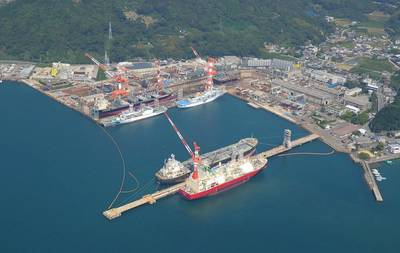 The newbuild is named M/V Tomaros.

"This is the 20th ship of our "neo66BC", the "wide beam shallow draft vessel" of our line-up "neo series"," said the shipbuilder.

Tomaros has four cranes and five cargo holds, and keeps the superior usability of 56BC.

The vessel is designed to have enough deadweight more than 66,000 metric tons and capacity more than 82,800 cubic meters for loading various cargos like coal, ore, grain, as well as lengthy/heavy cargo such as steel pipe and hot coil.

Fuel oil consumption is less than that of a conventional Supramax bulk carrier despite its enlargement.

As a result of research work of interviews with ship owners and operators, investigations on ports all over the world and present trade patterns, wide beam (over-P'max) and shallow draft make it possible to have wide flexibility for operations and high transport efficiency.

The size of hatch opening is the largest for this type of vessel in terms of both length and width.

Considering strengthened restriction for SOx, the ship has low sulfur fuel oil tanks, which are designed for operation in ECA (Emission Control Areas).