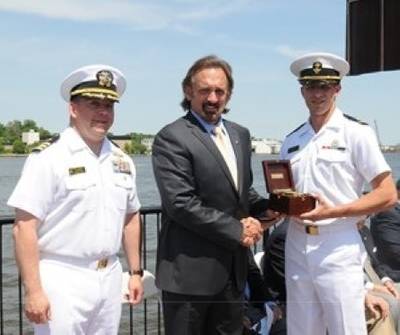 The company donated 100 licenses of its Voyage Management System (VMS) software to the U. S. Naval Academy Foundation for midshipmen training use at the Naval Academy.

The VMS software incorporates the Electronic Chart Display and Information System-Navy (ECDIS-N) which was selected by the navigator of the Navy and is now a fleet standard. The donation will enable future naval officers to become proficient with the same navigation software on their vessels after they receive their commissions. This software is already installed or under contract for installation on more than 200 U.S. Navy ships and submarines.

The Elmer A. Sperry Junior Navigator of the Year Award was established by the company to honor Elmer A. Sperry, founder of Sperry Marine (now part of Northrop Grumman) in 1910. Sperry invented the first marine gyrocompass in 1908 and earned more than 350 patents during his career in the maritime industry. Midshipman Ledoux received the award at graduation earlier this summer.

"Northrop Grumman is honored to contribute to the development of tomorrow's naval officers," said Teri Marconi, vice president and general manager of Northrop Grumman's Navigation and Maritime Systems Division. "Through our longtime partnership with the U.S. Naval Academy Foundation and the academy itself, it is our pleasure and privilege to support our future warfighters."