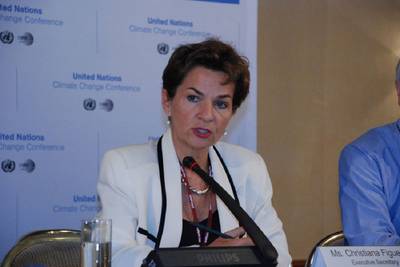 The world will take years to limit climate change to manageable levels, with no miracle fix at a Paris summit this year despite growing signs of action by governments and companies, the United Nations climate chief said on Thursday.

Senior officials from almost 190 nations will meet from Feb. 8-13 in Geneva to work on a draft U.N. deal to limit global warming. The agreement, built on national plans for curbs on rising world greenhouse gas emissions beyond 2020, is meant to be finalized at the Paris meeting in December.

Christiana Figueres, head of the U.N. Climate Change Secretariat, said it would take far longer to get on track to limit a rise in world temperatures to an agreed U.N. goal of 2 degrees Celsius (3.6 Fahrenheit) above pre-industrial times.

The Paris meeting may set five-yearly reviews of emissions targets. But the gap between national plans and a pathway of ever deeper cuts outlined by climate scientists "is one that we will close not in one year, not even in one five-year period, but rather over time," Figueres told an online news briefing.

Last year was the warmest since records began in the 19th century and average world temperatures have already risen by about 0.85C (1.5F), raising risks of heat waves, floods and rising world sea levels as ice melts.

"It would be a fundamental ... misunderstanding of the complexity of what we are dealing with to even imagine that an agreement in Paris would in and of itself, at the turn of a dime, miraculously solve climate change," she said.

Among major emitters, China, the United States and the European Union have already outlined their plans to limit emissions. Figueres said she expected all major economies to submit national plans for greenhouse gas curbs by Oct. 1, to give time for the Secretariat to give an overview before Paris.