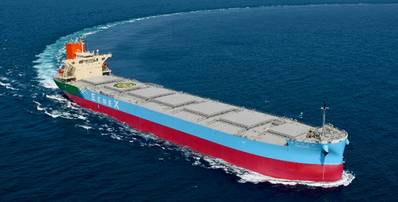 According to MOL, the name HOKULINK is derived from the name of Hokuriku Electric Power Company’s regional membership services, called "Hokulink."

As a vessel built especially for Hokuriku Electric Power, the HOKULINK will transport coal from overseas, along with the Energy Prometheus already in service, to contribute to a stable and sustainable supply of electricity, MOL said.

The Hokulink is the second vessel in the "EeneX" series of next-generation coal carriers.

"Adoption of a double-hull structure eliminated the need to fill cargo holds with ballast water, reducing the risk of marine pollution and minimize cargo contamination with salt and rust. In addition, the vessel is equipped with an SOx scrubber to reduce its environmental impact," MOL said.