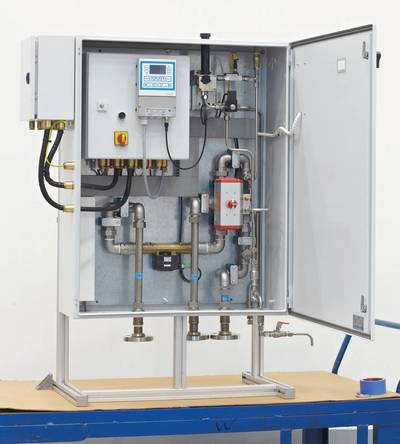 Last month at Posidonia SKF Blohm and Voss Industries launched the Turbulo BlueMon emission monitoring system, a system that is designed to record all emissions on board ships via a single system. But the system takes the role of monitoring and control a step further, perceived necessary in today’s climate of varied world emission zones, as the system couples these values with the vessel’s position data based on GPS signals, facilitating compliance with regulations and makes possible auditing and verification of emissions from ships.
Sea areas that are subject to other regulations, such as the U.S. Vessel General Permit 2013, are stored in the system, and thanks to the GPS link it is clear (and recorded) where and when which emissions are emitted. The data remains available for at least 24 months.
SKF Blohm + Voss has engineered the system with a modular design so that it can be individually configured as needed. The standard specification of the system comprises a central data logger connected to a PC. Depending upon the customer’s requirements a software package can be provided for each of the Annexes to the MARPOL regulations, which will monitor the respective emissions.
www.skf.com/marine
www.bv-industries.com

(As published in the July 2014 edition of Maritime Reporter & Engineering News - http://magazines.marinelink.com/Magazines/MaritimeReporter)