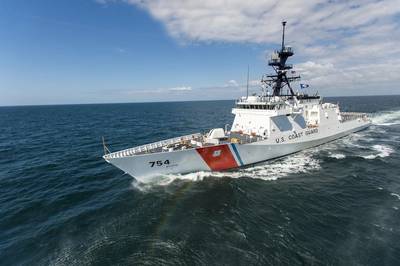 The fifth National Security Cutter, James, completed builder’s trials in Pascagoula, Mississippi, marking the next step in preparing the cutter for delivery to the U.S. Coast Guard (USCG).

"James’ successful completion of builder's trials means it’s one step closer to joining the Coast Guard fleet and executing some of  the most challenging maritime security missions facing our Nation. The men and women of Huntington Ingalls Industries and the Coast Guard Acquisitions Program should feel proud of getting James to this point in construction," said Capt. Andrew Tiongson, James' prospective commanding officer. "The crew is excited and looking forward to the ship’s commissioning in Boston on Aug. 8 and then sailing to our homeport in Charleston, South Carolina."
While underway, Huntington Ingalls Industries (HII) test and trials team conducted extensive testing of the propulsion, electrical, damage control, anchor handling, small boat operations and combat systems. This culminated in the successful completion of a four-hour, full-power propulsion run.
“Our Ingalls/Coast Guard team worked tirelessly during the three days, and the ship performed well,” said Richard Schenk, Ingalls’ vice president, program management and test and trials. “The Ingalls operating crew performed more than 180 events and handled each one with the utmost professionalism. It is obvious to all who sailed on builder’s trials that NSC 5 is ready for her acceptance trials at the end of April.”
Preparations for acceptance trials, conducted by the Coast Guard and the U.S. Navy’s Board of Inspection and Survey, can now begin with the successful completion of the builder’s trials. Acceptance trials are the final significant milestone before delivery and are used to ensure the cutter meets all contractual requirements. The U.S. Navy’s Board of Inspection and Survey will evaluate all aspects of James’ systems and performance. Based upon their findings, a recommendation will be made regarding acceptance of James to the Coast Guard.
The cutter is named for Capt. Joshua James, who is considered one of the most celebrated lifesavers in the world. His lifesaving career began at age 15 when he joined the Massachusetts Humane Society and ended with his death while on duty with the U.S. Life-Saving Service at age 75. James is credited with saving more than 600 lives during his time with the U.S. Life-Saving Service, which merged with the Revenue Cutter Service in 1915 to create the modern U.S. Coast Guard.
James is the fifth of eight planned National Security Cutters and the second to be home ported on the East Coast. At 418 feet and 4,500 tons, the Legend-class National Security Cutter is the centerpiece of the Coast Guard fleet.
The sixth NSC, Cutter Munro, is currently in production at Ingalls Shipyard in Pascagoula. The production contract for the seventh NSC, Kimball, was awarded to Huntington Ingalls Industries on March 31, 2014 and the contract for eighth NSC was awarded to HII in late March 2015.
The largest and most technologically advanced of the Coast Guard’s newest classes of cutters, the NSCs replace the aging 378-foot High Endurance Cutters, which have been in service since the 1960s. Compared to legacy cutters, the NSCs’ design provides better sea-keeping and higher sustained transit speeds, greater endurance and range, and the ability to launch and recover small boats from astern, as well as aviation support facilities and a flight deck for helicopters and unmanned aerial vehicles.