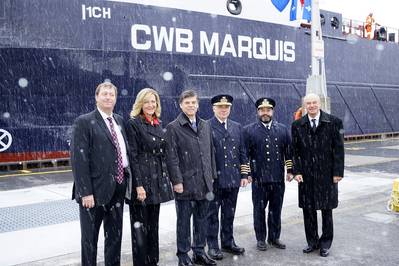 The U.S. and Canadian Seaway Corporations marked the opening of the Seaway's 57th navigation season today, with the transit of the newly-built CWB Marquis through the St. Lambert Lock.

The vessel is the first of two Equinox-class lakers ordered by Winnipeg-based grain marketer CWB that are being purpose-built for trade in the Great Lakes Seaway System. In 2014, over 12 million tons of grain moved through the Seaway, the highest volume recorded since the beginning of the 21st century.

Ian White, President and CEO of CWB, served as the keynote speaker at the opening.

"The future success of our company is dependent on reliable, cost-effective transportation networks going East, as well as West," White said. "Our new vessels, along with our terminals in Thunder Bay and Trois-Rivières, will allow us to reach our customers in Europe, the Middle East and Africa quickly and, at the same time, get the best returns for farmers."

"Through a new Regional Outreach Initiative, we are working to expand our reach and role across the Great Lakes region - North America's 'Opportunity Belt,' " said U.S. Saint Lawrence Seaway Development Corporation (SLSDC) Administrator Betty Sutton. "Helping our cities, states, and provinces in the Great Lakes region realize further economic growth and productivity via our binational waterway is the overarching point. Additionally, the significant financial investments we are making in infrastructure and new technologies through our Asset Renewal Program are enabling the entire Great Lakes Seaway System to realize increased safety and efficiencies."

The CWB Marquis, which will be managed by Canadian shipping company Algoma Central Corporation, is part of a $4 billion fleet renewal program being undertaken by various Great Lakes Seaway System shipowners over a span of 10 years (2009-2018). In terms of infrastructure support, the SLSDC is spending $99 million over the next five years to renew its asset base. Likewise, the SLSMC is also in the midst of a five-year plan which commits almost $500 million to modernizing its locks and structures.

In terms of the cargo volume outlook for 2015, Terence Bowles, President and CEO of the St. Lawrence Seaway Management Corporation (SLSMC), noted that he hopes to see a repeat of the strong results in 2014, when the Seaway recorded 40 million tons of cargo.

"Tonnage forecasts are always difficult, especially with continued volatility in the global economy," said Bowles. "The seaway, as part of the larger Great Lakes Seaway System, is a reliable transportation route with the capacity to move substantially more cargo to and from destinations throughout the world."

Over 227,000 jobs and $35 billion in economic activity are supported by the movement of various cargoes on the Great Lakes Seaway System.