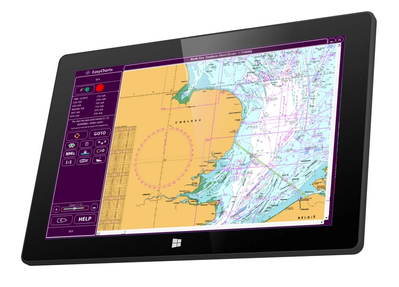 An independent consultancy and software development company will launch a new web and PC based navigational charting app at Ocean Business 2015.
Norcom Technology Limited said its eChart software combines up to date information from different sources including wreck, cable, tide and geographical data for navigational charts, making it suited for use by companies carrying out desktop studies prior to installation of offshore structures, cables, pipelines and vessel monitoring.
For computational packages, the software will be made available on a 10.1” Windows 8 Tablet, for the first time, at the show.
The software is a web (available April 2015) or PC based app which replaces the ARCS Skipper service, withdrawn by the UK Government Hydrographic Office (UKHO) in 2013.
Norcom, a UKHO data reseller and approved as a licensed developer of ARCS service, said it saw the opportunity to develop geo-referenced electronic navigational charts for Northen Europe, the Meditteranean and South America. Norcom also has agreement with SHOM (service hydrographique et océanographique de la marine), Bundesamt für Seeschifffahrt und Hydrographie (BSH, Federal Maritime and Hydrographic Agency of Germany) and Kartverket, the Norwegian Mapping Authority.
Chart data is supplied in chart packs, which can be downloaded from www.norcom-technology.co.uk or the data can be supplied on CD or USB memory stick.
Once downloaded, the charts are updated, for free, every quarter in January, April, July and October, (whilst in subscription) and emails are automatically sent to subscribers when corrections and Chart Plotter updates are made.
Visitors to Ocean Business will be able to order a Windows 8 tablet and Chart Pack bundle. The tablet allows users to run Norcom’s fully functional desktop Chart Plotter anywhere, from an office to at sea.
Also available on the Tablet will be the company’s Geodetic survey computation software and Seatrack electronic charting software.
Norcom will also be demonstrating its Catenary Anchor Monitoring System (CAMS) for barge monitoring during pipe laying and Sirius, its new offshore navigation construction software, for positioning DP vessel during installation work and FPSO monitoring.
norcom-technology.co.uk