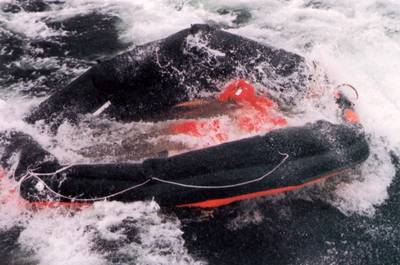 Estonia, Sweden and Finland will look into fresh evidence on the sinking of the ferry Estonia, which went down 26 years ago on Monday with the loss of 852 lives in Europe’s worst peacetime maritime disaster since World War Two.

The roll-on roll-off ferry, carrying 803 passengers and 186 crew, sank on a stormy Baltic Sea shortly after midnight on Sept. 28, 1994. The official investigation in 1997 concluded that the bow shield had failed, damaging the bow ramp and flooding the car deck.

However, Sweden said that a Discovery Network documentary about the disaster included new underwater video images from the wreck site showing damage on the starboard side of the wreck.

“Estonia, Finland and Sweden have agreed that verification of the new information presented in the documentary will be made,” the foreign ministers of the three countries said in a joint statement on Monday.

“Our countries will cooperate closely in this matter and Estonia as Flag State will lead this process.”

“A new technical investigation into the circumstances of Estonia’s sinking must be carried out,” BNS newswire quoted Estonian Prime Minister Juri Ratas as saying.

The Discovery Network documentary prompted some survivors and relatives of Estonia’s victims to demand a new independent investigation and also spurred renewed speculation about the cause of the accident.

“A hole in the hull was dismissed over the years,” Kent Harstedt, a survivor and former member of the Swedish parliament, told a news conference on Monday.

“What has emerged today adds to the question marks - why was the hole not included in the official investigation?”

Estonian public broadcaster ERR on Monday quoted Margus Kurm, a former state prosecutor and head of the committee that looked into the disaster from 2005 to 2009, as saying that a collision with a submarine could have caused the ferry to sink.

The Estonia ferry had been sailing from Estonia’s capital Tallinn and was headed for Stockholm in bad weather. Winds were around 20 meters per second and the waves around 4 meters high, according to the official investigation.

The ship sank about 22 nautical miles from Uto island in less than 85 meters of water.

Each year, Marine News magazine profiles 100 of the top firms in the North American workboat sector.From passenger vessels to towboats…