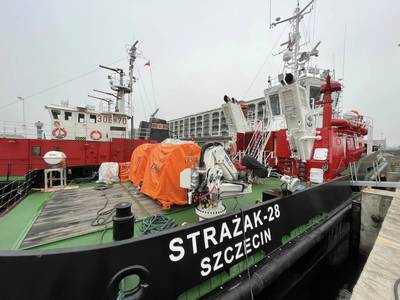 A new fireboat built by the Remontowa Shipbuilding SA shipyard in Gdańsk for Poland's Szczecin and Świnoujście Seaports Authority SA has been delivered in Szczecin.

The new firefighting vessel Firefighter-28 left the Remontowa Shipbuilding SA shipyard in Gdańsk on November 13 and arrived at the port of Świnoujście the next day in the evening. On November 18, the delivery and acceptance protocol was signed, which means that the ship formally belongs to the Szczecin and Świnoujście Seaports Authority SA. A ceremony for the christening and raising of the flag is scheduled for December 6.

According to the builder, Firefighter-28  has been adapted to fight fires on liquefied natural gas (LNG) carriers and will oversee fire safety in the waters of Szczecin, Police and Świnoujście seaports. It measures 29.2 m in length and 10.47 m in width, and its design draft is 3.45 m. It will develop max. speed up to 12 knots.