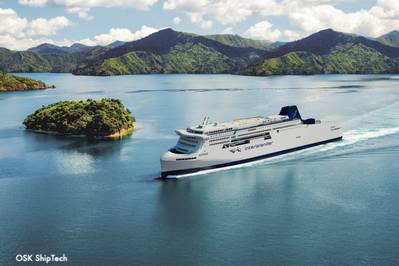 The international tender follows a NZ$400 Million (US$256.1 million) contribution to the 2020 Budget that enables KiwiRail to procure two new modernized vessels for service between capitol Wellington on the North Island and Picton on the South Island. When entering into operation in 2024 and 2025, the new ferries will replace the existing fleet of three ships, and at that time it will be more than 25 years since New Zealand last introduced purpose-built ferries.

In close cooperation with KiwiRail, Danish naval architects and ship designers OSK-ShipTech have developed the concept for the two new rail-enabled ferries, which will be able to carry twice the number of passengers, nearly double the number of trucks and other vehicles as well as a 300% increase in rail wagons compared to the existing vessels.

Anders Ørgård, Chief Commercial Officer of OSK-ShipTech, says, “Central for the design is maximum fuel efficiency and minimum emissions of CO2, and aside from being able to run on batteries at times, the new ferries will be future-proof and adaptable to new fuel sources continuously and as they become available.”

As part of the project, new terminals tailored to the vessels will also be developed in order to optimize the infrastructure and fully benefit of the new designs.

A new BMT design 140-ft. catamaran passenger ferry has  reportedly passed its sea trial and is due to enter the Kitsap Transit…