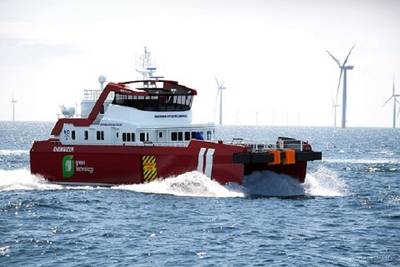 Northern Offshore Services has taken NYK's crew transfer vessel Energizer on a ten-year charter. The vessel will be used to transfer crews to offshore wind farms, mainly in Europe.

Japan's NYK, which shared the charter news on Thursday, also said it has additionally agreed to dispatch its engineers to NOS to participate in operations and ship management in Europe, a leading region in the offshore wind industry, in preparation for the development of the CTV business in Japan."

"This bareboat charter contract is a partial development of that MoU and will be the first CTV owned by NYK, which will continue its efforts to contribute to the spread of offshore wind power generation through the CTV business in cooperation with NOG," NYK said.

The vessel is currently under construction and will be delivered during q3 2021. When the vessel is delivered it will be operated by N-O-S and work in Northern Europe.

"We are pleased that NYK is interested in learning more about the European Offshore Wind Industry and want to learn from us. The cooperation is beneficial for both our companies and I believe we will achieve great things in the future, both when it comes to developing and operating CTV’s in Japan but also developing a sustainable green energy business chain. We are happy to welcome NYK personnel to our team”, says David Kristensson, Group CEO of Northern Offshore Group.

"Energizer is a state-of-the-art CTV developed by NOS. It is equipped with a large-capacity battery that can be recharged from a power generation facility and can be switched to hybrid mode to reduce fuel consumption and emissions, thus contributing to a reduction of the vessel’s environmental impact," NYK said of the vessel.

The Japanese government has set a goal of reducing greenhouse gas emissions to zero by 2050. In particular, offshore wind power generation is one of the areas where market expansion is most expected, with the aim of installing wind farms capable of producing 30–45 GW by 2040 as an important source of future electricity.

"A CTV would fulfill the important role of transporting workers between offshore work site facilities and onshore locations during the installation and operation of offshore wind turbines," NYK said.

"To strongly promote ESG management, the NYK Group will encourage new value creation as a sustainable solution provider through a business strategy that includes efforts to contribute to the renewable energy business in Japan and overseas," NYK said.