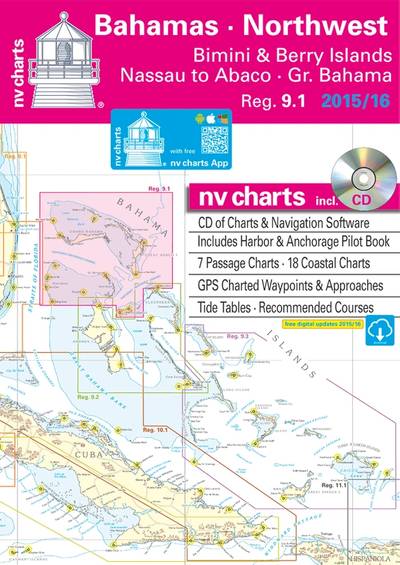 nv charts announces the release of its newly updated chart set for Region 9.1, Bahamas Northwest, including Bimini and Berry Islands, Nassau to Abaco, and Grand Bahama, for 2015/2016 in paper and digital format.

The chart set includes a CD of digital charts, including free navigation software, plus the free nv charts Mobile App for iOS and Android mobile devices, for real-time navigation with tablet devices. The App includes free digital updates for this chart set for 2015/2016. Nv charts are relied on for accuracy and dependability by recreational boaters, professional mariners, and the U.S. Coast Guard.

The new Region 9.1 chart set now features a compact, fold-over format (un-bound ‘booklet’ style) that reduces the physical size of the paper chart set by half (but not the cartography itself) for ease of use on today’s smaller navigation stations and chart tables. “Since these charts are produced from our own cartographic databases, rather than simply copied from government sources, we have designed them so that no critical elements are in the crease, or fold, where they might lose definition over time from use and wear,” stated Hasko Scheidt, CEO.

The new Region 9.1 release is updated and meticulously surveyed and now available just in time for cruising the Caribbean Sea during the upcoming winter months. The set is available in a variety of formats – paper, digital, memory cards for chartplotters, and with the aforementioned nv charts’ App for navigation with mobile devices. Region 9.1, Bahamas Northwest, is designed for sailors, motor boaters, fishermen and professional mariners, and cruising enthusiasts. It includes the following: