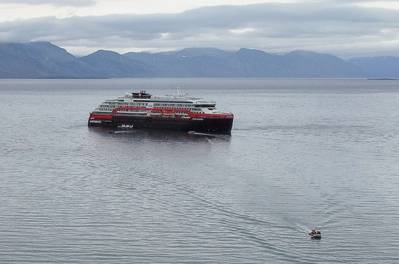 Norway stopped all cruise ships with more than 100 people on board from disembarking at its ports from Monday, after an outbreak of COVID-19 was reported late last week on a ship that had already disembarked at the port of Tromsoe.

At least 41 passengers and crew who were on board the cruise ship MS Roald Amundsen, operated by Norwegian company Hurtigruten, have so far tested positive for the coronavirus, while hundreds more on board were told to self-isolate for 10 days, local public health officials said on Sunday.

Norway is in touch with Germany, Denmark, Austria, Philippines and Latvia as passengers and crew on board came from these countries, officials said.

Ships that have already departed will be able to offload passengers and crew at Norwegian ports, but those yet to start journeys will not be able to do so, Norwegian Health Minister Bent Hoie said. The new rules are effective for the next 14 days.

“The pandemic is not over,” Hoie told a news conference.

The Nordic country of 5.4 million inhabitants had reopened most of society in recent weeks as it got the COVID-19 pandemic under control. Some 9,268 infections have been reported in Norway as of Monday, with 256 deaths.

First out
Hurtigruten was the first cruise operator worldwide to return an oceangoing cruise ship to service in mid-June, touting reduced passenger capacity, social distancing and strict rules on hygiene. It will now suspend all so-called expedition cruises until further notice.

“We have failed,” CEO Daniel Skjeldamn told a news conference. “I apologize strongly on behalf of the company.”

The MS Roald Amundsen had been scheduled to sail around the British Isles in September. Trips with two other vessels have also been suspended, though its business shipping goods between Norwegian ports will continue.

Norwegian police told Reuters they would investigate whether any laws had been broken.

Four of the MS Roald Amundsen’s crew members were hospitalized on Friday when the ship arrived at Tromsoe, and later diagnosed with COVID-19. Tests showed another 32 of the 158 staff were also infected.

Among the infected crew, 32 were from the Philippines while the rest were of Norwegian, French and German nationality. The foreign crew had been tested for the coronavirus before leaving their home countries but did not quarantine before starting work on the ship, the company said.

Passengers were allowed to disembark before anyone had been diagnosed, triggering a complex operation to locate them.

So far, five of the combined 387 passengers travelling on the ship on two separate cruises since July 17 have been found to carry the virus, the Norwegian Institute of Public Health and the Tromsoe municipality said.