Norwegian Plans US Trips in July with Mandatory Vaccinations 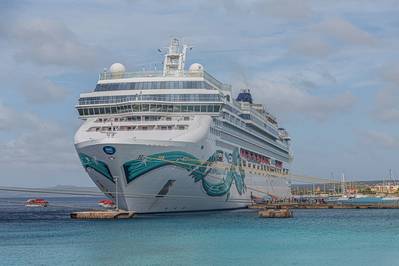 Norwegian Cruise Line Holdings Ltd said on Monday it had sought the approval of U.S. health authorities to restart trips from U.S. ports from July 4 with mandatory vaccinations for travelers, bringing new hope to the ravaged industry.

The company’s announcement follows the U.S. Centers for Disease Control and Prevention’s (CDC) latest guidance last week to the cruise ship industry, including the need for COVID-19 vaccinations.

In a letter, Norwegian Cruise said that its plan was in line with the latest guideline and that it aimed to kick start trips at a 60% capacity starting July 4.

Norwegian also said it would increase the capacity by 20% every 30 days and ramp up its fleet departing from U.S. ports.

“We believe that through a combination of 100% mandatory vaccinations ... we can create a safe, ‘bubble-like’ environment for guests and crew,” Norwegian Cruise Chief Executive Officer Frank Del Rio said.

Shares of Carnival, Norwegian Cruise and Royal Caribbean closed up between 3% and 7% on Monday.

While Carnival Corp noted that the latest guideline was “largely unworkable and stood in stark contrast to the approach taken in other travel and tourism sectors,” Royal Caribbean said it was “reviewing and studying” it.

The CDC’s restrictions on sailing last year to curb the spread of the coronavirus had led to limited operations, with fewer trips resulting in heavy annual losses and billions of high-interest-rate debt.

The companies had asked for new guidance, saying earlier this year that the “lack of any action by the CDC has effectively banned all sailing in the largest cruise market in the world.”

Even in its latest guidelines, the CDC did not specify a date for the resumption of operations from U.S. ports.

The Cruise Lines International Association, which represents the three companies, also said the guidance was “burdensome and ambiguous” and urged for a controlled return to service this summer.