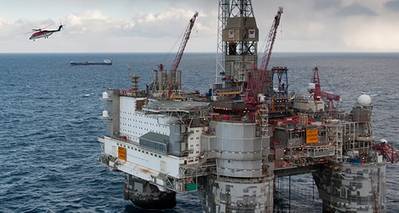 Statoil, on behalf of the licence owners, issued a Letter of Intent (LOI) to Samsung Heavy Industries for a permanent floating oil storage unit (FSU).

The contract is worth an estimated US$ 230-million and includes options to buy two additional units. The new storage unit will replace the existing buoy loading system on the Heidrun field in the Norwegian Sea.

The Heidrun field has been developed with a floating tension leg platform with a concrete hull and has been on stream since 1995. Oil from the field has since the start been exported via a buoy loading system consisting of two buoys and purpose-built shuttle tankers.

The unit will be built by Samsung at the world's second-largest shipyard in Geoje Island, Republic of Korea. Engineering will start immediately and the unit is expected to be on location at the Heidrun field in the first half of 2015. Statoil has also secured options to buy two additional storage units for use on other fields if required.

"Our ambition is to maintain Heidrun production at least until 2045," says Morten Loktu, Statoil's head of the operations north cluster on the Norwegian continental shelf. "To reach this goal we need robust systems on board and efficient and secure oil export solutions. The new storage unit will provide such an efficient and robust oil storage solution in the Heidrun area."