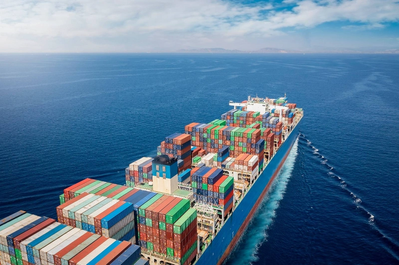 The ocean freight rate landscape in the Far East has been completely redrawn since the start of the year, with spot rates plummeting by an average of 75% across the six major trading lanes, Xeneta said in its latest report.

By comparison, long-term rates are proving more resilient, with a fall of ‘just’ 13%, the ocean and air freight rate benchmarking and market analytics platform said Friday.

The latest analysis from Oslo-based Xeneta highlights a market in flux. Since early summer, spot rates have fallen from historical highs. In January 2022, they were at least 2 000 USD per FEU higher than contracted rates on the selected routes. However, they now languish 1 900 USD per FEU below new long-term agreements from the last three months.

“This is a jarring reversal of fortunes, with the traditional spot rate premium being completely overturned on key global corridors,” says Peter Sand, Chief Analyst, Xeneta. “As such, shippers with flexible logistics strategies can really benefit from accessing the short-term market at present, while those locking into long-term contracts find themselves paying more…. And in some cases, substantially so.” 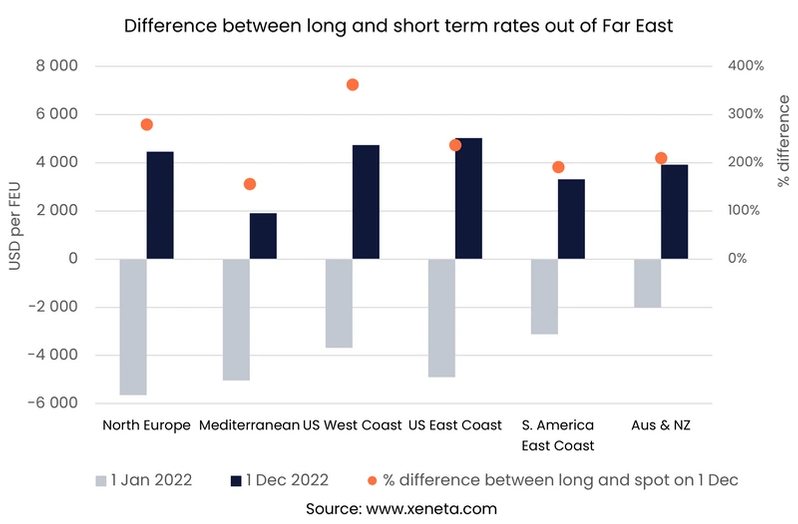 Sand says that some routes are yet to experience long-term rate declines, pushing the divide between the two rate categories to eye-catching levels. The Far East to US East Coast leads the way here, with contract rates sitting 11% above start-of-year prices.

“The difference between short- and long-term agreements here is unprecedented,” he explains. “This is currently the largest divide, with long-term rates now USD 5 030 per FEU more expensive than spot rates. That’s a 237% premium. If you go back to January, the shoe was on the other foot, with the spot rates sitting USD 4 900 per FEU higher.”

Sand notes that the US trades are the only two of the six leading corridors where long-term rates are up since January. Putting this into context, he explains that long-term rates to the US climbed more slowly than other trades, with later tendering processes contributing to the fact that “they only peaked in Q2.”

Xeneta’s data, which is crowdsourced in real-time from major global shippers, shows the biggest change is taking place on the Far East to North Europe trade. Here spot rates have gone from a position of a USD 5 640 per FEU premium on 1 January 2022 to currently sitting at USD 4 460 below long-term rates on 1 December. This translates to an 83% fall, while long-term rates have restricted their decline to 24%.

Sand concludes: “This is one of only two of the major trades out of the Far East, together with the South American East Coast route, where new long-term rates are less than double the average spot rate in early December. This is a stark indication to shippers of exactly where the value lies in the market as we head into the New Year. The short game, it seems, is the one to play right now.”