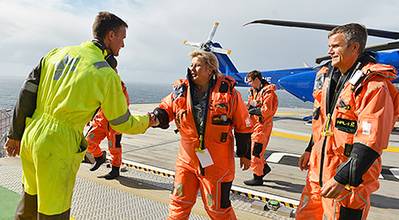 Norwegian prime minister Erna Solberg officially opened the Gudrun platform in the North Sea today, 19 August. This is the first new Statoil-operated platform on the Norwegian continental shelf (NCS) since Kristin in 2005.

Gudrun is the first in a long line of new field developments operated by Statoil, and therefore it represents a new era on the NCS.

The next in line is Valemon, which is scheduled for start-up later this year. Gina Krog and Johan Sverdrup on the Utsira High are next in the North Sea.
Bilde

We also have Aasta Hansteen and Johan Castberg to come in northern Norway. Johan Sverdrup alone will ensure value creation for another 40-50 years from the NCS.

Gudrun is the result of a global development strategy. The jacket has been delivered by Kværner Værdal in mid-Norway, and the living quarters by Apply Leirvik at Stord in western Norway.

The topside was provided by Aibel with sub-supplies from Thailand, Poland and from Haugesund in Western Norway. The helideck was constructed in China.

Gudrun has been put on stream on time and below the cost estimate of the plan for development and operation (PDO). The global puzzle has helped keep the costs down.

The development has demonstrated the strong competitiveness of the Norwegian supplier industry.

“Gudrun has proven that we are able to take our industry into a new era with global competition and local value creation,” said Statoil’s chief executive Helge Lund in his speech at the opening.

On Gudrun, Statoil has combined a new field development with existing pipelines and facilities. The oil and gas from Gudrun is processed on the Sleipner A platform which is located 50 kilometres further south. The gas is then piped to Europe, while the oil is piped along with the Sleipner condensate to the Kårstø processing complex north of Stavanger for shipment.

“Gudrun is a good example of how we manage to realise projects by combining new field developments with existing infrastructure. This is good value creation that helps maintain activity and extends the life of a wide range of offshore fields and facilities,” said Lund.

The recoverable reserves on Gudrun are about 184 million barrels of oil equivalent. The platform already produces 30,000 barrels per day.