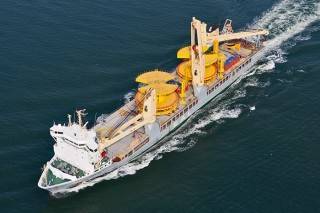 A significant challenge within this project was the absolute precision required on the weight spreading calculation on the hatch covers. The stability of the hatch covers was ensured with tailor-made steel supports, which were installed beneath the hatch covers, SAL Heavy Lift said.

The company added that a special grillage was designed to spread the weight of the heavier carousel.

“These extensive measures guaranteed a permanence in safe handling and transport of the cargo for the entire project duration,” SAL Heavy Lift said.

Toshi Yamazaki, COO at SAL Heavy Lift GmbH, Germany, added:” The successful completion of this demanding project on time and to our customer’s satisfaction shows our vessels and our team have the ability to deliver in the most technically demanding circumstances.”