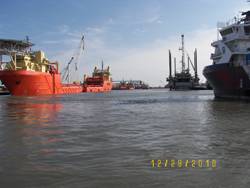 Activity in the Port of Lafourche, LA.

Growing In Deepwater Gulf of Mexico.

As the feds issue more drilling permits for the Gulf, demand for offshore support vessels in the GOM deepwater sector has accelerated, industry members say. Anger about the government's spill-related, drilling moratorium--which ended a year and a half ago--has given way to optimism recently. The region's shallow-water sector, nevertheless remains slow and gives little cause for cheer.

Paul Candies, president and chief executive of Otto Candies, LLC, in Des Allemands, La., said “we're seeing good demand for large, high-quality OSVs now and for the next couple of years. The industry has seen the value of first-rate equipment--OSV and Construction/Dive Support/ROV vessels--and is willing to commit to some long-term contracts.” But he added “we're not seeing much improvement in demand for midsize and small equipment.” Otto Candies is a marine transportation and offshore services company.

What's behind the renewed need for deepwater vessels? Don Briggs, president of the Louisiana Oil and Gas Association, said “We've slowly, surely gotten back to work in Gulf. We're not at pre-Macondo levels yet but we're coming back. Today's count in the GOM is 43 rigs and that's up from 25 a year ago,” he said in late March. However, that compares with 148 rigs in 2001.
Chett Chiasson, executive director of Port Fourchon in Louisiana, said the government has been approving more drilling permits, and “BSEE, the Bureau of Safety and Environmental Enforcement, anticipates another ten rigs will be operating in the Gulf by the end of this year. That's good news for vessels.” Port Fourchon services 90 percent of all U.S. Gulf deepwater projects. Chiasson continued, “Activity at Port Fourchon started to improve at the end of last year and has continued to get better. Port activity is 90 percent of what it was prior to the moratorium and that number is constantly rising.” He added enthusiastically, “you can feel the change in activity at the port. Things are looking up for our tenants. Companies have announced plans to build offshore vessels, and some are agreeing to build for the deep end as more rigs come on line. It takes a year and a half to get a rig on line.”

Shane Guidry, chairman and CEO of Harvey Gulf International Marine, LLC in New Orleans, said in late March “there are no boats available to rent, and it's the busiest I've seen it in two decades.” Separately and In Morgan City, David Barousse, business development director at Fleet Operators, Inc., agreed that OSV demand is on the rise. “Vessel operators are very optimistic that 2012 will be busy because of the feedback they're receiving from their customers” – a mix of oil and gas operators and service companies, he said. Fleet Operators owns and charters supply vessels for offshore oil and gas.

Boysie Bollinger, president and CEO of Bollinger Shipyards Inc. in Lockport, La., said demand for future, deepwater vessels is increasing, and he pointed to recently announced orders for deepwater vessels from Hornbeck Offshore Services and Harvey Gulf International. “There are quite a few new, large deepwater rigs scheduled to work in the Gulf in the next few years,” he said. “We're optimistic about deepwater activity in the coming year.”

That said, Bollinger cautioned, “demand for vessels should continue to increase but could be offset by U.S. flag vessels that were deployed overseas in the last two years returning to the Gulf.” Bollinger Shipyards builds OSVs, tug boats, ocean barges, rigs, liftboats, patrol boats and inland push boats and barges.

Elsewhere, in a $720 million program announced in November, Hornbeck Offshore Services in Covington, La., plans to build sixteen, 300-class offshore supply vessels, and has contracted eight of them to VT Halter Marine in Pascagoula, Miss. and eight to Eastern Shipbuilding Group in Panama City, Fla., with options to build more. Robert Socha, executive vice president for sales and marketing at Bollinger, said “demand for deepwater support vessels in the 4,500 to 6,000 DWT range has increased in the Gulf over the past year with announcements of future, deepwater oil and gas exploration. Several announcements have been made for new-build programs at various shipyards, filling Gulf Coast shipyard capacity. The demand for OSV’s is targeted towards larger capacity vessels with DP 2.”

Socha added “our repair groups continue to see demand for our larger dry-docks that are capable of servicing larger support vessels.” Bollinger, the top volume vessel-repair company in the GOM, has twelve shipyards and 31 dry docks in Louisiana and Texas.

Don Briggs told MarineNews in March, “After the Macondo accident, the Gulf of Mexico suffered a sharp decline as an attractive place to drill a well, according to a Fraser Institute survey” of petroleum industry executives. The GOM dropped from 11th out of 133, to 60th out of 135 in the Fraser Institute’s fifth annual survey, released in June 2011, about barriers to investment in oil and gas exploration and production around the globe. But industry is more hopeful now, said Briggs. “The important thing is to have real, continued consistency in the government permitting program. As everyone gets more comfortable with the program, certainty comes back.”
He added “with rigs going back to work, supply vessels and support activities on the drilling side are experiencing some upside and new business. We'll see more drilling, more investment and more opportunities for the vessel industry.”

In reaction to the BP spill, the Bureau of Ocean Energy Management (BOEM) required that all deepwater drilling contractors in the GOM meet new safety and environmental rules and install well-containment systems in case of an accident. As for rigs that left the Gulf for Brazil and Africa, “They're under long-term projects and may not be coming back soon,” Briggs said. “But that doesn't mean that other rigs in other parts of the world won't make their way to the Gulf.”

Chiasson said ”we're not seeing a big uptick in shallow-water activity or in internal movement of goods. We hope shallow-water rig permitting will improve.” In its most recent analysis, GNO Inc. in New Orleans noted that an average of 4.7 shallow water permits were issued monthly in the Gulf from November to January, 34 percent below the monthly average in the year before the BP spill. Boysie Bollinger agrees, saying, “Shelf activity has increased, but very slowly. We don’t see a lot of increased activity on the shelf, based on new-build requests for those types of vessels.”

The Inner Continental Shelf extends from the coastline and gradually slopes to depths of 360 feet. In Louisiana, the federal Outer Continental Shelf starts 3 1/2 miles offshore. Both shallow and deep water permitting in the Gulf lag pre-spill rates. Only three deepwater permits were issued monthly from November to January, down 48 percent from the average of 5.8 permits per month prior to the spill. Approval times for plans are much longer than before the spill, and detailed, environmental assessments are required now for deepwater drilling plans. It’s not getting any easier, most agree.

Some of the Gulf's shallow water wells are starting to run dry, driving the industry into deeper water. As oil becomes more expensive to extract, companies are looking to adapt old fields for offshore wind energy. Baryonyx Corp. in Austin, Texas plans to build two wind farms, 5 and 10 miles offshore respectively from Port Isabel, Texas. Power will be delivered to the Electric Reliability Council of Texas or ERCOT transmission grid. Offshore wind farms can also help oil and gas companies – who ship diesel fuel to run generators on their platforms and rigs – save on fuel costs.

Most vessels fueled by liquid natural gas more than meet current U.S. Environmental Protection Agency emission standards, and LNG is cost effective. “But LNG is still new and slow to catch on,” Guidry of Harvey Gulf said. “I have only four of them being built.” That said, Harvey Gulf arguably remains ahead of the pack in building increasingly redundant safety systems out in front of coming regulations for their growing, ultra-modern fleet of workboats.
As announced this past February and October, Harvey Gulf contracted Trinity Offshore, LLC, in Gulfport, Miss. to build four LNG-fueled OSVs. Those ecologically-friendly boats will meet American Bureau of Shipping ENVIRO+ standards. They will have dual-fuel capabilities and when running in gas mode, will produce no sulphur oxide emissions since gas doesn't contain sulphur. Nitrogen oxides will be slashed compared with diesel operations, and CO2 emissions will be lowered. Natural gas produces almost no particulates.

In January, President Obama said that his administration is opening another 38 million acres of the central Gulf of Mexico to exploration and development with June 20 oil & gas lease sales in New Orleans. Those sales, however, were scheduled in the 2007-2012 Outer Continental Shelf Leasing Program, planned in 2007. Thankfully, they weren't canceled, industry members said.

Today, increased drilling activity has allowed measured optimism in a recovering, GOM maritime economy.  More drilling in an environment of heightened government oversight and increased safety points to a better year for OSV operators and their clients.

Susan Buchanan is a New Orleans-based business writer, specializing in energy, maritime matters, agriculture, the environment and construction. She holds a master's degree from Cornell University in agricultural economics and an undergraduate degree from the University of Pennsylvania.