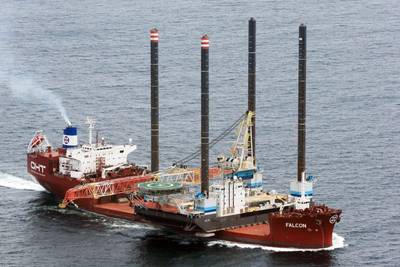 Oslo-listed Offshore Heavy Transport has said it has recently experienced an uptick in demand for the transportation of offshore wind equipment to China.

The Oslo-based company used to bring in 80% of its business from the oil and gas sector, however, it recently said it planned to exit from oil and gas markets by 2026, with the exception of decommissioning.

Three of OHT’s five heavy transport vessels are have recently transported or are preparing to transport assets to China which will each begin installation on three separate Chinese wind farms.

OHT's MV Falcon vessel recently transported the jack-up barge JB118 from Abu Dhabi, UAE, to Guangzhou, China, and has recently discharged liftboat QMS Gladiator in Xiamen, where it will be utilized for the Changle offshore wind installation project. The liftboat, measuring over 100m in length and weighing more than 10,000 MT, was transported from Abu Dhabi in the UAE.

The MV Albatross heavy transport vessel is mobilizing to transport the nearly 15,000 MT jack-up wind turbine installation vessel Apollo, from Rotterdam in the Netherlands to Guangzhou in China, where it will be working on the Yuedian Shaba offshore wind installation project.

Meanwhile, MV Osprey, also headed to Guangzhou, is preparing to transport another self-elevating platform from Abu Dhabi, UAE, with arrival estimated in May. The liftboat will be used for offshore construction projects in Southern China, OHT said.

Apart from the traditional side of its business, being the transportation of heavy equipment using its heavy transport vessels, OHT is also working to build a fleet of offshore wind installation vessels.

Its Alfa Lift offshore wind foundation installation vessel, being built in China, will debut at the giant Dogger Bank offshore wind farm in the UK North Sea. It will install all monopile foundations and transition pieces for Dogger Bank Phases A and B between 2022 and 2024.