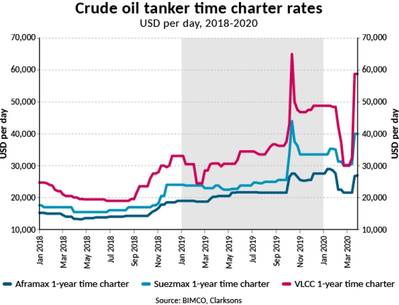 If one ever needed proof that, no matter how dire the situation, there is always a silver lining, look no further than the crude tanker market, which has seen it day rates skyrocket in the face of a global pandemic that has effectively ground world commerce to a crawl.

As is the case with other gravity defying business phenomena, geopolitics is a central factor, in this case a battle between Russia and Saudi Arabia to flood the world with oil in the face of declining demand and prices.

“The outbreak of the coronavirus has impaired major economies around the world and slowed down demand for oil products,” said Peter Sand, BIMCO’s Chief Shipping Analyst, in the organizations analysis note release today. “The oil price war is temporarily offsetting this slowdown of crude oil tanker demand, but this will only underpin the market for so long, and the outlook is not shaping up positively in the medium-term.”

According to BIMCO, time charter rates had gradually increased from the lows of 2018, until geopolitics kicked in during September 2019, which inflated rates into extremely profitable territory. Rates remained high for the remainder of Q4, but eventually fell as the elevated rates were not supported by market fundamentals and the transitory effects evaporated. This is once again the case with the breakdown of the OPEC+ alliance lifting rates despite otherwise poor market fundamentals i.e. fleet overcapacity. On 27 March 2020, the 1-year TC rate for a VLCC reached $ 58,750 per day

As oil prices have plummeted, so too has the price for very low sulfur fuel, dropping from just over $700 per ton to start the year to the mid-$200s per ton as of late March, effectively negating a primary concern of shipowners for the last three years: the unknown impact of IMO2020’s strict new sulfur reduction regulation on fuel prices.

According to BIMCO, the narrowed low-sulfur to high-sulfur spread has diminished the upside of a scrubber. The premium for a scrubber-fitted VLCC on a 1-year TC has been cut in half from USD 10,000 per day on 10 January to USD 5,000 per day on 27 March 2020.