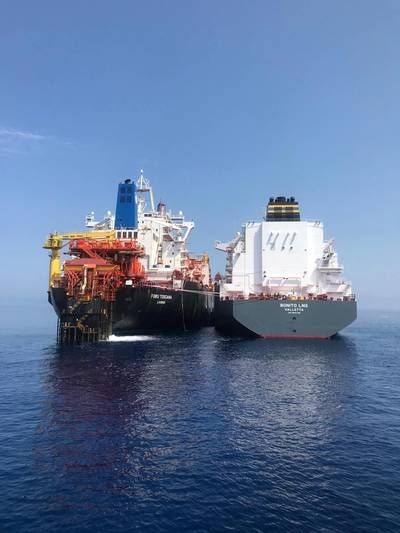 Per the owner, OLT Terminal has, over the years, received LNG from the main exporting countries such as: Algeria, Cameroon, Egypt, Equatorial Guinea, Nigeria, Norway, Peru, Qatar, Trinidad and Tobago, United States, Spain, Belgium, and the Netherlands.

The total quantity of LNG discharged so far is approximately 13.8 million liquid cubic meters, OLT Offshore said in a statement this week.

Since October 2018, the Terminal has been working at 100% of capacity.

The "FSRU Toscana”  is moored about 22 km off the coast between Livorno and Pisa, is connected to the national grid through a 36.5 km long pipeline. "FSRU Toscana” has a maximum authorized regasification capacity of 3.75 billion Sm3 a year, about 5% of the national requirement.

As for the Bonito LNG, the carrier operated by TMS Cardiff Gas, it was delivered this year in South Korea. VesselsValue's data shows that the carrier left South Korea in May, took a stop in Nigeria in mid-June, before setting off for Italy.