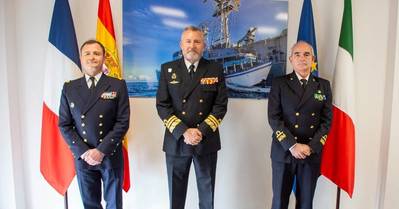 The European Union's counter-piracy outfit announced a new Deputy Commander has taken over to lead its maritime security operations off the coast of Somalia.

Rear Admiral Messina joined the EU’s counter-piracy operation in February last year and as part of the DCOM role, he represented the Operation and met with EU counter-piracy partners. The strong cooperation and coordination that exists between the EU Naval Force, other naval forces, maritime industry and regional states have ensured maritime security in the Gulf of Aden and Indian Ocean essential for the freedom of navigation and rule of law.

Speaking about his time as DCOM, Rear Admiral Messina stated, “It has been a privilege to serve with Operation Atalanta and to meet the sailors, marines and airmen who are working tirelessly on a daily basis to ensure that the humanitarian aid destined for the Somali people, as well as vessels carrying goods to and from Europe, arrive at their destination safely. I wish Rear Admiral Slaars and the rest of the Operation Atalanta team the very best of luck – Stronger Together!”

Rear Admiral Slaars, who will be holding the DCOM post for the next months, said, “I want to thank Rear Admiral Messina for his support during the handover. I am ready to build on his excellent contribution. We will continue to work hard to ensure we provide the much needed maritime security in the Western Indian Ocean, in close cooperation and the support of all our partners in the region.”