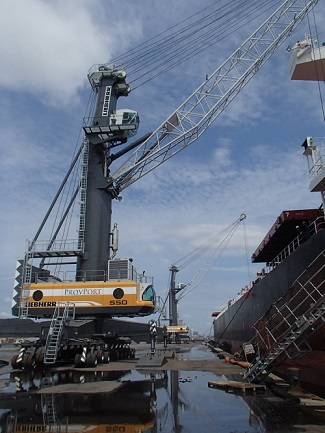 ProvPort, operator of the Port of Providence – one of the busiest ports in America’s northeast – has expanded capabilities including the addition and operation of two Liebherr 550 Mobile harbor cranes.

The cranes arrived in June and began operation immediately after being certified.

“The new Liebherr 550’s replace two 30 plus year-old cranes. The lift capacity, the efficiency and the speed in which we can load exports and unload imports puts ProvPort in a leadership position,” said Chris Waterson, General Manager of Waterson Terminal Services, ProvPort’s Management Company.

The two state-of-the-art mobile harbor cranes were purchased through a public-private partnership leveraging a $10.5 million federal TIGER II grant. The remainder of the $21 million project is funded through ProvPort.

The first ship serviced by the new cranes, the M/V North Prince was unloaded twice as quickly as would have been normally completed. The ship, carrying 25,000 tons of aluminum oxide and aluminum oxide “dregs” was unloaded in record time for ProvPort.

The materialwas delivered to Washington Mills in Grafton, Mass. Also, portions of the material were railed to Niagara Canada. It's an abrasive used as grit for sandpaper and grinding wheels. The material was imported from China.

“The expansion of ProvPort’s operation coupled with the facility being one of only two deep-water ports in New England, gives us a competitive advantage,” said Bill Brody, General Counsel and Secretary of the Board of Directors.

ProvPort is a critical economic engine for New England. ProvPort generates an estimated $200 million total economic impact on the region.

The port is host to more than a dozen of America’s most respected-companies. Combined, the activities at ProvPort provide more than $60 million in direct business revenues and $16 million in revenue to local and state government.