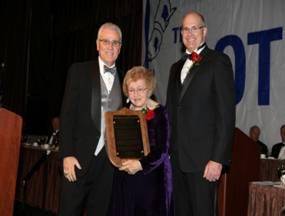 Two Maersk Line Ltd. ships have been honored with Mariners’ Plaques for performing rescues at sea. The awards to the officers and crews of the containership, Maersk Utah, and the oceanographic survey vessel, USNS Bowditch, were presented at the Admiral of the Ocean Seas (AOTOS) award dinner on Friday, November 15 in New York. AOTOS is the maritime industry’s highest award and is the main fundraiser for United Seamen’s Service (USS) which operates seafarer welfare centers in ports around the world.

The officers and crew of the Maersk Utah received the AOTOS Mariners’ Plaque for their participation in the rescue of 83 Syrian refugees. On the night of August 9, 2013, the Maersk Utah was about 70 nautical miles off the coast of Sicily when officers received a distress call regarding a small craft. Aboard the Utah were Master Robert H. Sienel, Chief Mate Joe Single, Second Mate Bryan Phillips and Third Mate Thomas Komenda. The 300-meter-long containership altered course and increased speed to reach the distressed boat before nightfall.

According to Capt. Sienel, “The Maersk Utah approached the craft and stopped alongside at 20:33. At this time it became clear that the boat, approximately 15 meters long, was carrying many people of various ages, gender and physical condition.” Utah maneuvered into position to shield the refugees’ small boat against the rising wind and sea, while the Italian Coast Guard, with trained ship and crew, were in route to perform the rescue operation.

Over the next 9.5 hours, the Utah sheltered the boat while the Italian Coast Guard completed the rescue. The first Coast Guard vessel arrived at about 01:28, but was too small to execute the rescue in such rough seas. The Utah received instructions to provide shelter for both boats while awaiting the arrival of a larger rescue vessel. The second Italian Coast Guard vessel arrived at 03:54 and began rescuing the refugees. Finally, at 10:00, the rescue of all 83 refugees was complete and the Utah was released to continue its voyage to Algeciras, Spain.

The second AOTOS Mariners’ Plaque was awarded to the officers and crew of the USNS Bowditch for the complex rescue of the crew of a U.S. Navy ship in the Philippines. On January 17, Bowditch was instructed to aid the Navy minesweeper, USS Guardian, which had run aground on Tubbahata Reef, Philippines. Making speed, Bowditch arrived at the scene on January 18, facing foul weather, winds greater than 25 knots and a variety of dangers associated with high seas breaking over a shallow reef.

The Military Sealift Command’s (MSC), MV Champion, was already on the scene and working with the Philippine Coast Guard to determine the best course of action. Soon the decision was made to evacuate the grounded ship’s crew. Bowditch relied on her precision sonar to determine the exact water depth near the grounded ship, and then used her dynamic positioning system to maintain a safe position 400 yards from the stranded vessel. Bowditch deployed four out of her five lifeboats and within three hours, rescued all 79 of the minesweeper’s crew.

Bowditch housed 45 of the evacuees and provided them with hot showers, warm food and dry clothing. Over the next several days, Bowditch used her hydrographic survey capabilities to monitor the site of the grounded ship, as well as other reefs in the area to facilitate the safe deployment of salvage ships and crane anchors. Bowditch also hosted diving salvage crews and salvage officials before being released to assume her regular duties on January 28. Before Bowditch departed, Navy Rear Admiral Thomas Carney visited the ship to commend her officers and crew for not only saving 79 lives, but also for helping to protect a precious marine reef from further damage.